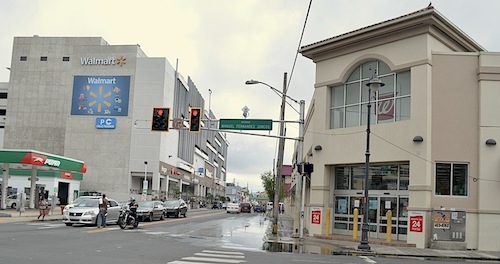 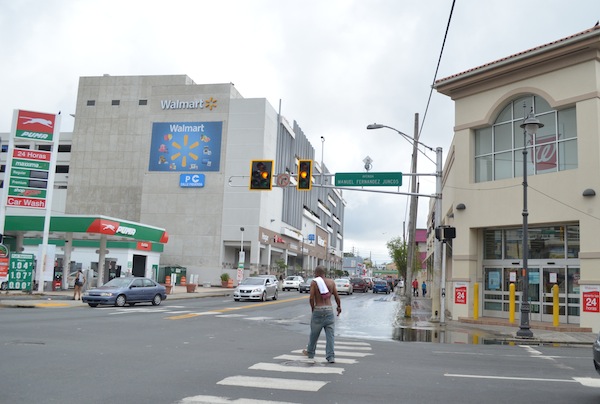 In Santurce, one of San Juan’s oldest neighborhoods, a six story Walmart Supercenter popped up over a year ago. Surrounding 150,000 square foot building, there are all kinds of small businesses: drug stores, beauty parlors, cafeterias, food marts and restaurants. A city in its own.

Across the street from that Walmart, which even features an Asian food restaurant, stands a 24 hour Walgreens. 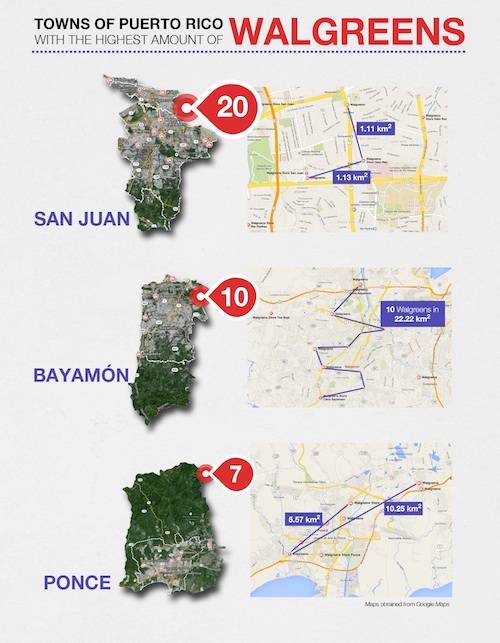 In another San Juan area, Río Piedras, Walgreens drugstores are within walking distance from each other. This chain has such a concentration of stores in Puerto Rico that most of them are less than a kilometer apart. In the southern part of the Island there are up to seven stores on a road stretch of less than 10 kilometers.

San Juan has a population of 389,714 and there are around 20 Walgreens stores, making the Puerto Rico’s Capital the city with the highest concentration of this chain drugstore in US jurisdiction.

There are 118 Walgreens drugstores in Puerto Rico, according to Walgreens’ official website. This information was confirmed by the corporation’s spokesperson in Puerto Rico, María Estela Cestero. This makes the Island the second US jurisdiction with the chain’s highest presence when compared with 10 states with a population similar to the caribbean jurisdiction, 3.7 million. 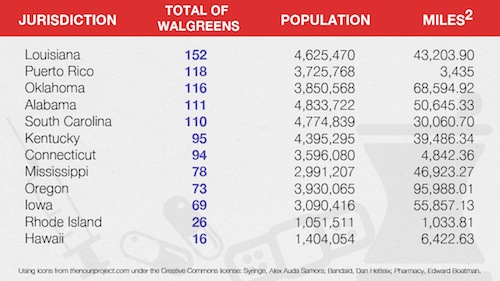 Meanwhile, Walmart claims it operates here only 56 stores including its brand name Sam’s Club Warehouses and the Amigo Supermarkets that the chain acquired from local business owners in 2004. 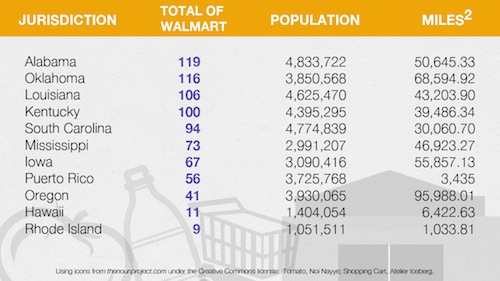 However, a list prepared by Puerto Rico’s Center for Investigative Reporting (CPIPR, for its Spanish acronym) showed that there are more stores than those reported by both companies. The CPIPR identified 127 Walgreens and 65 Walmart’s, including Sam’s Club Warehouses and Amigo Supermarkets.

CPIPR’s list was made using Google Maps and Google Earth, and was doubled-checked with a list of physical addresses of all stores and through calls to their listed phone numbers. 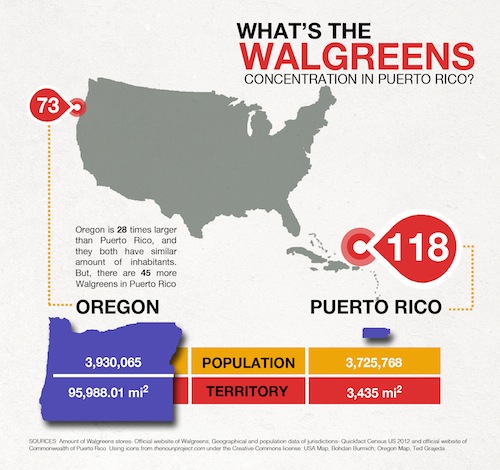 Even taking as certain the data offered by both companies, the result is the same: Puerto Rico is the US jurisdiction with the highest concentration per square mile of Walgreens and Walmart stores.

On the near 3,000 square miles of the Puerto Rican land area there are 45 Walgreens, more than the 73 established in Oregon, in a territory extension 28 times bigger (approximately 95,000 square miles) with a population of little over three million, very similar to Puerto Rico.

The Island also has more Walgreens than Iowa, where there are 69 in over 55,000 square miles inhabited by about three million people. 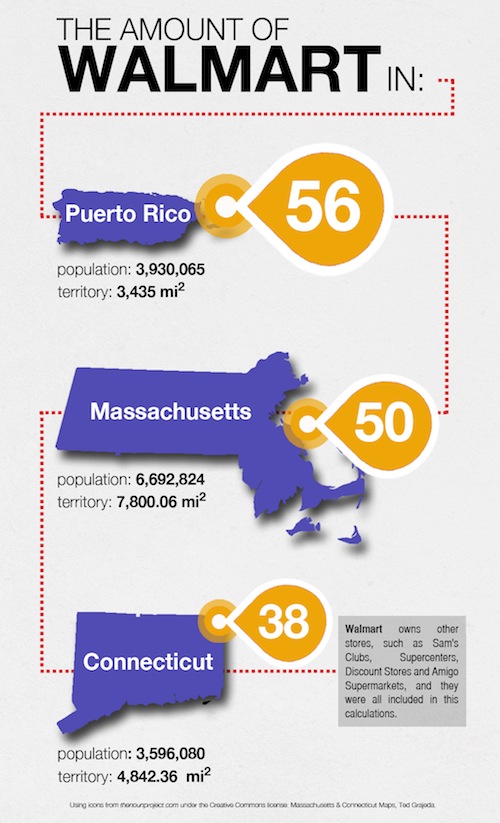 Likewise, if the data offered by Walmart is taken at face value, Massachusetts, almost three times bigger than Puerto Rico, and with a population of over six million people, have 50 stores, including the Supercenters, Discount Stores and Sam’s Club Warehouses. That’s only three more stores than Puerto Rico.

Connecticut, with a population of three million, has 38 Walmart stores, and Oregon 41.

Even when compared with twelve countries where Walmart conducts business, Puerto Rico ranks first in the amount of Walmart and their brand stores per square miles. Other countries where Walmart operates include Argentina, Brazil, Costa Rica, China, Guatemala, Honduras, India, Japan, Mexico, Nicaragua, Salvador, South Africa and the United Kingdom.

This soaring store chain expansion has been going on in spite of the Puerto Rico’s government Department of Justice Office of Monopolistic Affairs, which has been unable to halt Walgreens’ growth since it arrived in 1962. The same office has also witnessed Walmart’s rapid expansion since it arrived in the local market in 1992 and it bought Amigo Supermarkets in 2004.

In 2002, through a civil suit under the Monopoly Law, the government objected to Walmart’s plans to buy Amigo Supermarket chain. However, then Secretary of Justice Anabelle Rodríguez decided that Walmart could buy some of the stores as long as it kept the same number of employees and Puerto Rican agricultural products supplies that Amigo stores had at the time.

In 2005 the antitrust office began an investigation to determine the commercial impact of the international chains on the local market. The inquiry was sparked by the skyrocketing trend of offshore drugstores settling on the Island after the overturn of the Certificates of Necessity and Convenience that was required to any drugstore interested in doing business in Puerto Rico, local or foreign. The certificate determined the location of the new business based on the concentration of drugstores per square mile and the area’s needs. These certificates were eventually eliminated.

To date the outcome of this investigation has not been made public and several requests to see the files made by the CPIPR have been unsuccessful.

Deputy Secretary for the Monopolistic Affairs Office, Jesús Alvarado, told the CPIPR that he had requested the 2005 investigation files which are in an inactive archive located outside the Department of Justice. He already has nine boxes of documents related to the inquiry in his office which he showed during the interview, and assured that he would release the information once he reviewed it all to make sure that it doesn’t include confidential corporation details.

According to Alvarado it is an investigation about Puerto Rico’s drugstore market as a whole including neighborhood and chain outlets.

He claimed that it is very difficult to identify an illegal monopolistic practice.

“I know that Walgreens’ case, for example, like the case with Walmart or other chains which could be described as having a wide presence in the Island, the notion that they have a monopoly and if they are infringing or not the law by being a monopoly has been brought up”, he said.

“But that is not as easy as to say ‘you have too many stores’”, he said.

“The possible Monopoly Law infringement basically covers two practices: acquiring a monopoly through anti-competitive practices, or conducts to keep a monopoly through anti-competitive ways. Having a monopoly in itself is not illegal in our jurisdiction nor in the Federal jurisdiction nor in any free market jurisdiction, because there can be many competitive reasons that can lead a business to end up with a monopoly. It could be even by chance or, for example, because there are three companies in one market and two of them end up bankrupt and there is only one left which has done nothing to take business away from the others”, he said.

US District Court ruling was crucial for proliferation

For María Isabel Vicente-Mestre, executive director of the Puerto Rico Community Drugstores Association, eliminating the requirement for a Certificate of Need and Convenience has been fundamental to the spiraling sprawl of Walgreens drugstores across Puerto Rico.

Before 2005, all drugstores had to obtain this certificate from the Puerto Rico Health Department to comply with the United States National Act for the Health Resources Planning and Development. Under that program businesses had to prove first a need for the services.

But this requirement was eliminated after Walgreens sued the Puerto Rico Health Department in the US District Court in San Juan in 2003 arguing that parts of the certificate conditions interfered with interstate commerce. The court ruled in favor of the local Health Department but the latter lost the case in the First Circuit Appellative Court in Boston, where Walgreens filed an appeal.

According to Vicente-Mestre, in 2005 there were 58 Walgreens in Puerto Rico. That number doubled after the elimination of the certificate requirement, she said.

“The Certificate of Necessity and Convenience took into consideration the population to be served within a radial mile and the amount of prescriptions to be dispensed. When the certificate was required, CVS (another US drugstore chain) never tried to establish here. It wasn’t until it was revoked (the certificate) that they considered coming to Puerto Rico”, Vicente-Mestre added.

Puerto Rico’s Center for Investigative Reporting also revealed recently Walmart’s practice of using local and federal subsidies and incentives to expand their operations in Puerto Rico and stories of employees denouncing dire working conditions in the mega stores in the Island.

Melanie Pérez-Rivera and Carla Minet contributed to this report.