The CPI revealed the contract of the company that identified the bondholders and the interview made to the president of BondCom, Robert Apfel.

Who holds the public debt?  With whom is the government negotiating?  The answer would be found in a database prepared by the BondCom company for the Government Development Bank (GDB), according to a contract identified by the Center for Investigative Journalism.

Bond Holder Communications Group, BondCom’s corporate name, was hired on June 12, 2015 to develop a “Bondholder’s Communication Database” that would contain information in regards to the bonds issued by the GDB, PREPA (Puerto Rico Energy and Power Authority), as well as by other government of Puerto Rico debt issuers selected by the GDB and BondCom.

The information gathered by this company would include the total number of bonds held by the investors who have purchased debt bonds from the government of Puerto Rico and their total value. Yesterday in New York, Melba Acosta, GDB President, met with a group of bondholders that have formally agreed not to divulge any information of the discussions held in regards to the transactions related to the ELA debts.

According to the GDB, the company has made strides in the task assigned. “BondCom has identified several bondholders of the debt held by the GDB, the Puerto Rico Sales Tax Financing Corp. (known as COFINA), and PREPA. The GDB is currently analyzing the amount of information that can be made public, based on the existence of confidentiality agreements made by BondCom and other sub-contracted entities with the company, and that the rights of third parties cannot by affected”, stated the GDB President to the CPI through its press office.

The contract indicates that all the data gathered by BondCom belongs to the GDB, which holds the right to use it and provide it to third parties. “BondCom should manage the data in such a way to ensure that the information does not go public, that the data is treated in a complete, confidential manner and that it can only reveal the data exclusively to the GDB”, as stated in the agreement.

What do we know about BondCom?

The firm, based in New York, gained popularity in the world of technology and finances in 2012, when it used 100 iPads as an internal and confidential communication tool given to the bondholders of the Greek debt. During the transaction, BondCom installed an application in the machines and distributed them among the bondholders who held leadership roles in the re-negotiation of the Greek debt and who were scattered across Europe.

As part of BondCom’s mediation technology, a substantial reduction of the debt was achieved, assured Robert C. Apfel, founder and president of BondCom. 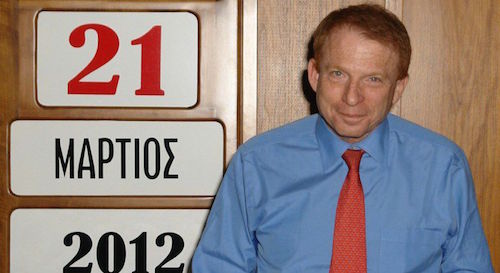 The company calls itself “the world leader in assisting bond issuers, their lawyers, and work group in dealing through the initiatives of bondholders successfully. “ It has been involved in different debt processes of cities, such as, Detroit, public agencies or independent countries, such as, Argentina, Greece, Belize, the Dominican Republic, Italy, Peru, South Africa, the Philippines, Uruguay, Mexico, the U.S. Virgin Islands and, the United States. It also offers services to private companies in Latin America, in the banking, health services, power, mass media areas, among others.

Besides being a communication link between investors and creditors, BondCom offers stockbroker services and serves as an intermediary in the purchasing of companies, as indicated in their internet page.

Apfel was asked to explain the services he will offer the GDB and how they differed from those offered to other countries, and said: “Puerto Rico is not a country, it’s a territory. In terms of the services (for which we were hired), the circumstances of each entity are different. Most of the time we are hired to identify the bondholders, which is typical. Up until now we have probably obtained a lot of information about a lot of the bonds, and some information about the other bonds. But that info is one or two months old, and has to be refreshed probably. The broad composition of investors of families versus companies, shouldn’t have important changes in its composition or categories.”

Apfel considers the individual investors as heroes who have purchased the government’s debt and that they hold more than 50% of the island’s debt.

“The majority of the investors in Puerto Rico are not rich, not institutional, not millionaires. They are families that live in the US and its territories. The miracle of Puerto Rico is the enormous quantity of people that have invested and are Puerto Ricans. These hedge funds are temporary reservoirs of money. Puerto Rico bonds are very unique, unique in the world and in the US. The number of Greek people that invested in the bonds of Greece was very small.”

The executive ventured in his opinion of future scenarios.

“If there is a bankruptcy law, the small investors will have a great control over the outcome. I say open the table to the people. Hedge funds have no right to take control.”

“This situation provides an opportunity for Puerto Rico to turn to its small investors, who are not experts, don’t want to get rich, just want to have a retirement, the real, not the fake, not the temporary”.

Up to this moment, the GDB and the Fortaleza have upheld a policy to protect the identity of the investment firms that have purchased Puerto Rican bonds, holding meetings with investment firm representatives but that they do not recall their names or keep meeting logs.

Apfel also gave his opinion in regards to the disclosing of information about the investors.  “Imagine that you have a neighbor that invested 200,000 to send his son to college. Why should his name be on a list?

Since July, it is known that several vulture fund firms holding BGH bonds and other agencies formed groups and hired law firms to sue in case of payment default.  On October 21, 2015, the GDB reported failure in the negotiations with a group of bondholders of their agency but did not give details about the identity of the firms with whom they were negotiating.  Two sources revealed to Bloomberg that the firms that left the negotiating table were vulture funds Avenue Capital, Fir Tree, Candlewood, Perry Capital, Claren Road, Fore Research and Management and Solus Alternative.

In July, this vulture funds group, called the GDB Ad Hoc Group, hired the law firm Davis Polk and Wardwell, corporate litigation experts that represent the largest companies and financial institutions in the world, to represent them in case the GDB defaulted in their payment. The GDB has stated that it has until Dec. 1st to make a bond payment.