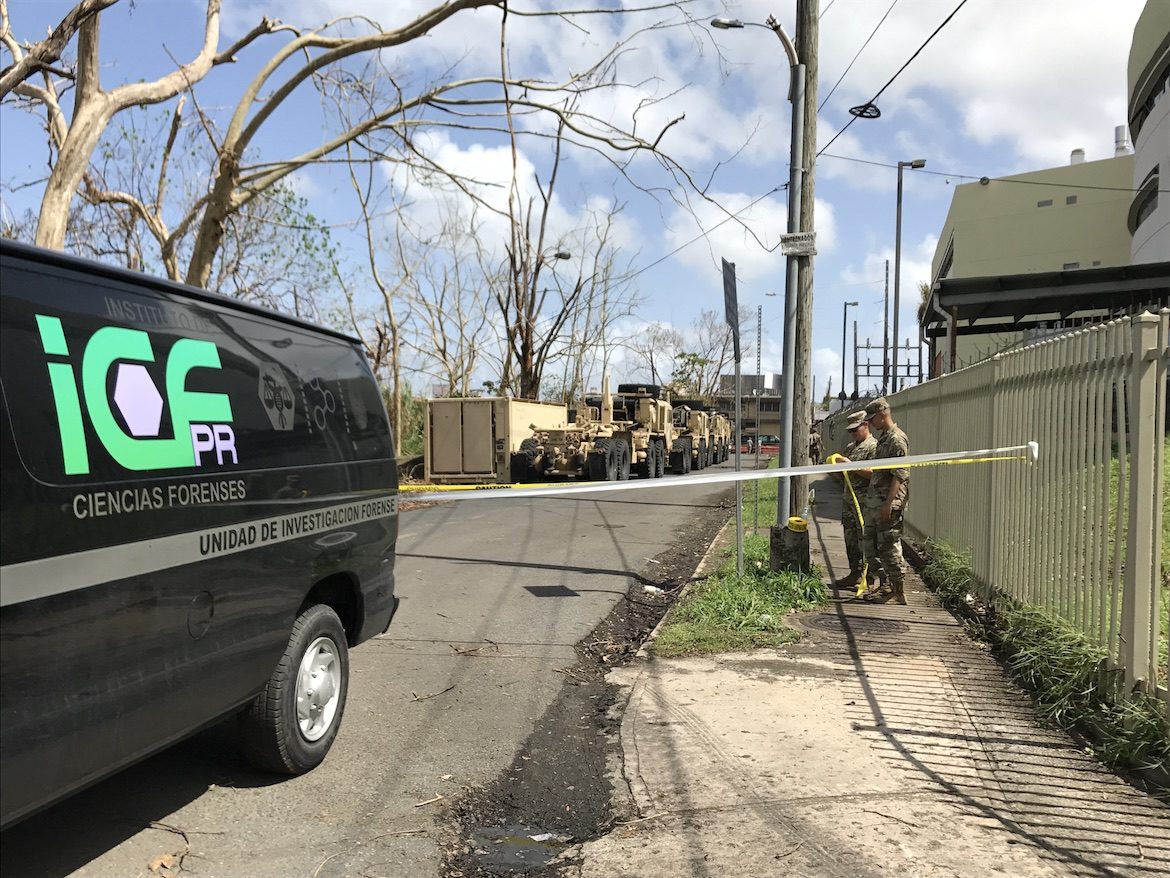 The Institute of Forensic Sciences is occupied by troops from the US Army Reserve.

Although he has spent several days on a media tour trying to deny the fact that dozens of people have died in Puerto Rico in circumstances related to Hurricane María, and that many of them are accumulating in morgues in 69 island hospitals, the Puerto Rico Public Safety Secretary, Héctor Pesquera, admitted in an interview with the Center for Investigative Journalism (CPI in Spanish) he believes fatal disaster victims exceed the 16 that the government has officially accounted for so far.

As of today, there are also 30 people missing at the Puerto Rico Police Department.

“I believe there are more dead, but I don’t have reports telling me [for example] eight died in Mayagüez because they lacked oxygen, that four died in San Pablo because they did not receive dialysis,” he said. Meanwhile, he said the federal government would bring 10 morgue-containers to add 360 additional spaces for bodies to the 295 slots available at the Institute of Forensics Sciences (ICF in Spanish.) Furthermore, there are 41 forensic pathologists from the U.S. Department of Health on their way to Puerto Rico to provide support to the overloaded operation, he said.

The CPI uncovered that ICF’s area to receive and release corpses in the government Medical Center where several of those containers are already located has been militarized with tanks and troops from the United States Mortuary Affairs Unit. 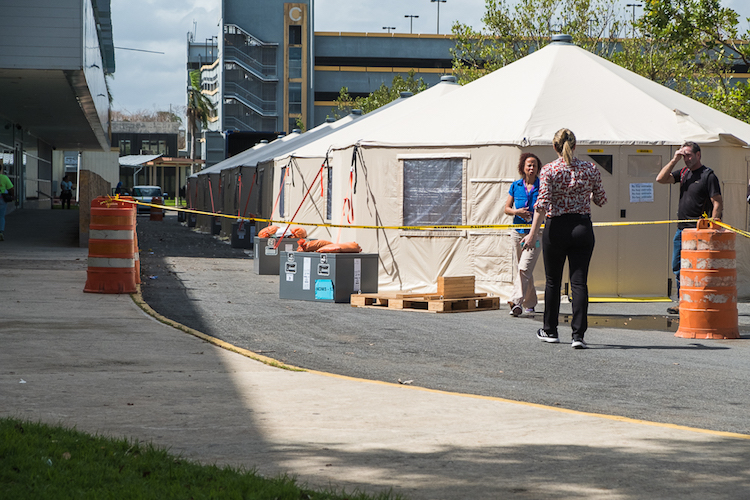 The federal Department of Health has set up mobile hospital tents in the Central Plaza of the Río Piedras Medical Center to accommodate the excess of patients in the main hospital facility in Puerto Rico. The Center for Investigative Journalism learned that last week there were 70 orthopedic cases in a row that had not yet been addressed.

Pesquera, who was on the defensive in his answers on the subject, also accepted that there are still places without communication, and that it is possible that more people have died in those places and that the government still does not know it. He also acknowledged that there may be victims among the patients who were without support services, since 70% of the hospitals had to close due to María’s immediate impact.

“I absolutely agree,” he said in response to the CPI’s statements.

After investigating through sources from nine hospitals, police and mayors, the CPI revealed last week that the official death toll from Hurricane María was wrong and that there were at least several dozen additional victims, possibly hundreds.

The sources indicated that the morgues of the hospitals consulted were at full capacity, information that was confirmed by Health Secretary Rafael Rodríguez-Mercado, who also said that at least three hospitals in the western area had notified him of seven additional victims and that they spoke of people who had buried relatives in mass graves given the impossibility of communication and transportation due to María’s impact. After that interview with the CPI, Rodríguez-Mercado stopped making public statements on the matter and his spokesman, Peter Quiñones, said all statements would be made by the governor’s Chief of Staff, Ramón Rosario.

Pesquera said on Friday he had gathered hospital executives in the face of concerns about the information released by the CPI and that everyone told him there was no accumulation of corpses in their morgues. However, that same day, sources at two hospitals, Doctor’s Hospital and the Veterans Hospital, told this media outlet that the military had shown up in their institutions to remove bodies. At the Veterans Hospital, for example, there were 26 corpses. 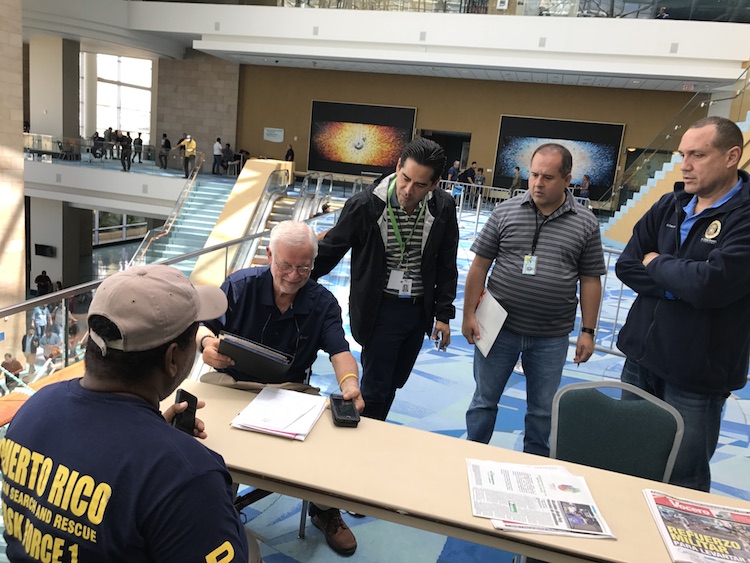 When Pesquera was asked why the government insists on keeping the death toll at 16 nearly two weeks after the hurricane, and following multiple reports of additional victims, he said they have not added additional victims to the list because death certificates from deaths that occurred during those days in Puerto Rico have yet to be released, nor has it been possible to analyze the information to determine which were natural deaths and which were deaths related to emergency-related circumstances.

The truth is that the death registry system completely collapsed, like so many other services and sectors in Puerto Rico, by the passage of María and without the death certificates, the corpses could not be removed from hospital morgues.

Secretary Rodríguez-Mercado told the CPI last Monday that some of the employees of said service had gone back to work that same day, to begin emptying out hospital morgues. On Friday, a CPI source said that only 22 of the 42 Demographic Registrar’s offices were open and were certifying the deceased manually because, as with most of the island, they still did not have electricity or computer systems, and have employees who have lost their homes and others who are still isolated. The source estimated that last week they certified more than 250 deaths.

Now, it is necessary to analyze how many of these deaths were related in some way to the Hurricane María emergency, and how many were regular natural deaths. The way in which the deaths will be defined by the emergency is still unclear, Pesquera admitted in the interview.

When asked how he would do it, he thought about it and asked this media outlet for an example. When CPI mentioned the case of the father of the former mayor of Lajas, Leovigildo Cotté, who died in a shelter due to lack of oxygen and who is not yet in the official figures, he said he believes that he would be counted as a hurricane victim. Regarding when the actual number of event-related deaths will be known, Pesquera did not want to estimate, but anticipated that the analysis process will take a lot of time, possibly months.

In addition, the problem at the Demographic Registrar’s office adds to the delay in the clearance of the bodies because funeral homes, also affected by the disaster, have not been able to pick up and transport the bodies due to lack of gasoline and mobility.

Meanwhile, relatives of people with whom they have not yet been able to communicate continue to desperately turn to the radio and social networks in an attempt to find out about their loved ones. The government has not yet put a system in place to try to communicate these people with each other or try to match those names with the deceased that are being certified.

Pesquera said the instruction to the mayors is that they are the ones who are closest to the citizens and are the ones who must collect this information. He urged citizens with relatives who were still missing to go to their City Hall or their nearest police station to report it.

As of Monday, the police had 29 people reported missing in the police regions of San Juan, Arecibo, Caguas, Carolina, Utuado, Ponce and Mayagüez.