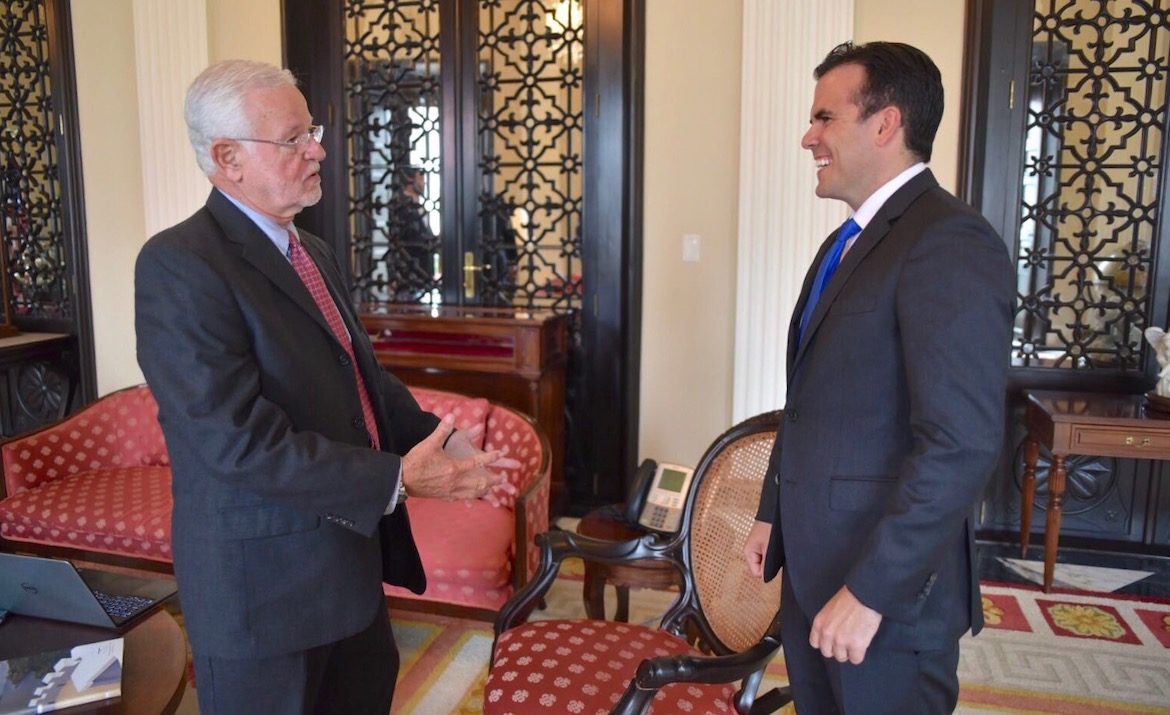 Three months after the passage of hurricane María and after nine stories published by the Center for Investigative Journalism (CPI), Gov. Ricardo Rosselló finally accepted that the process of accounting for the deaths caused by the disaster in Puerto Rico must be re-done and investigated “meticulously.”

The people in charge of this investigation will be the same ones who carried out the first defective accounting process: the Secretary of Public Safety, Héctor Pesquera, and the director of the Puerto Rico Demographic Registry, Wanda Llovet, according to Rosselló’s Press Secretary, Yeniffer Álvarez-Jaimes.

Pesquera has defended the process and insisted that investigating the excess of deaths on the island after Maria’s landfall is not necessary. Llovet has spoken little publicly, and has not amended the accounting process that maintains the official death toll at 64, even though her preliminary numbers confirm that from Sept. 20 to Oct. 30 there were at least 985 deaths in excess on the island when compared with 2016. The official has also refused to provide the CPI with the complete and updated database of the causes of death in Puerto Rico.

Regarding questions about whether there will be a scientist, epidemiologist or demographer experienced in the group that will design this research, Álvarez-Jaimes said Pesquera and Llovet “will determine if they need additional resources.”

“We have received a recent analysis conducted by recent media on the number of hurricane-related deaths, which they claim may be higher than the officially certified number to date. These news reports used the data provided by the Puerto Rico Demographic Registry; However, the government needs to investigate whether the increase in deaths is directly or indirectly related to Hurricane María,” the governor said in a press release on Monday.

“Each life is more than a number and each death has important information attached, as well as an accurate report of the facts related to their death. That is the law. A legal certification process by a forensic doctor or a physician is necessary, and each family deserves that their loved one’s case be examined independently and exhaustively,” Rosselló added.

The CPI raised the first questions over official government death figures on Sept. 28 after investigating and documenting that dozens of people had died in eight municipalities due to circumstances related to the emergency that caused the catastrophe that left Puerto Rico without light, water and communications and many isolated places, such as hospital closures and the lack of electricity.

The CPI published that the morgues in a dozen hospitals around the island were at full capacity and estimated that the deaths could be hundreds, by projecting that data to the 78 municipalities. At that point, the government kept its official death number steady at 16 people.

That same day, Pesquera told the CPI that it was “false” that hospital mortuaries were overcrowded, but on Oct. 2 he acknowledged in a new interview with this media outlet that he believed the fatal victims of the emergency were more than 16.

However, Pesquera did not change the accounting procedure, nor the figure that remained at 16.

The next day, President Donald Trump visited Puerto Rico, and in a moment that marked the discussion on Hurricane María, he congratulated Rosselló and the federal agencies for the low mortality of the event during a joint press conference. At that moment, Trump asked in front of the press how many were the dead. To which Rosselló responded with: “Sixteen.” Then, and based on that response, Trump said the situation in Puerto Rico was not a real catastrophe like Hurricane Katrina.

Four hours later, the government revised its number of victims for the first time and increased it from 16 to 34.

That same day the Department of Justice issued a special protocol to expedite the transfer of corpses from hospital morgues, which it did not publicly disclose.

After the original story of the CPI published on Sept. 28, which was republished that same day by Metro Puerto Rico, The Miami Herald and El Nuevo Herald, among other media, about a dozen mainly international media began to review the history and to inquire more on the matter.

Univisión was one of the first to interview funeral homes that told them about the increase in the volume of corpses in early October. There were also articles on the subject in Buzzfeed on Oct. 8, and in Vox on Oct. 11.

Since the end of October, and for two months already, the CPI has requested an interview with Rosselló on the subject of the untold deaths, but it has not been granted.

On Oct. 19, a congressional delegation headed by Elizabeth Warren asked the interim secretary of the U.S. Department of Homeland Security, Elaine Duke, for an investigation of Hurricane María’s victim count, citing, among other sources, the CPI’s stories that were republished and carried out with the support of Latino USA. Legislators from Puerto Rico also filed a resolution to investigate the matter, but the majority in the House of Representatives did not give way to the measure.

Meanwhile, the CPI published seven follow-up stories between Oct. 2 and Nov. 17, where it investigated, for example, the chaotic state of hospitals that the government said were “operational.” It also published that in September alone, the excess of deaths in Puerto Rico was 472 and the average number of deaths in the island skyrocketed in the 10 days following the hurricane with an increase of 43 percent.

The government continued to timidly increase the list of official deaths in increments of two or three each week, but did not alter its case analysis and accounting methodology.

On Nov. 16, the CPI published the result of six weeks of research in seven towns in Puerto Rico, through which it managed to document 47 cases — with names — that were not in the government’s official list that at that time remained at 55. Pesquera dismissed all of the reported cases, and he also threatened one of the funeral home owners who served as source for the CPI’s report.

“The funeral home will have to notify the authorities what it did with the body to set off the relevant legal processes. No body can be disposed of without a death certificate,” he said in written statements in reaction to the publication.

After the publication, New Progressive Party Sen. Henry Neumann began public hearings to audit the process of certification of deaths linked to Hurricane María. It is expected that this process will end before the end of the year with Pesquera’s testimony.

On Nov. 20, CNN aired a story that it put together after calling 112 funeral homes in Puerto Rico. Combined, they said that 499 corpses of people whose deaths were linked in some way to the emergency caused by María had been kept in their premises.

The report resulted in Pesquera adding two of the cases reviewed by CNN to the official list and asking funeral directors to bring him information.

On Nov. 21, demographer Alexis Santos of Penn State University, published a study using data from the Demographic Registry, which confirmed that there was an excess of 500 deaths in September in the wake of Hurricane María and anticipated that October would show a similar pattern. The agency had not yet released the data for October.

On Dec. 7, the CPI published that the excess of deaths in Puerto Rico in September and October was 1,065 people compared to 2016, after obtaining data from the Demographic Registry that had been requested for more than two months. The numbers reflected significant increases after Hurricane Irma and, particularly, after Hurricane María. Between Sept. 20 and Oct. 30 the excess was 985 deaths, compared to the same period of the prior year.

One day later, The New York Times published a story in its digital version using the same registry data, a little less updated, that put the excess deaths in September and October at 1,052. The story, which occupied the printed cover of the influential newspaper the following day, provoked strong reactions in the United States and a petition of the Democratic congressmen, who filed a request for investigation.

Pesquera still maintained his position of defending the procedure the following week, arguing that in Puerto Rico there have been months with more deaths than September and October. For this he used numbers from December and January of previous years, which is statistically wrong since during the Christmas, historically, there is a large increase in deaths in Puerto Rico due to accidents and typical suicides of the holidays.

He also said, in response to questions from the CPI, that he saw no need to conduct a formal epidemiological study of the deaths because “in Puerto Rico there is no epidemic.” His statements were criticized by demographers and experts on the subject, who have questioned the official’s lack of expertise.

“I have ordered the Demographic Registry and the Department of Public Safety to carry out a thorough review and inspection of all the deaths that have occurred since Hurricane María hit, regardless of what the death certificate says,” the governor said in the statement on Monday.

He said the review will guarantee that the government is counting all the victims “correctly” although he did not explain in detail how the study will be done. The Demographic Registry’s Press Officer, Maricela Díaz, referred questions on the subject back to La Fortaleza, indicating that it will handle both the process and the statements on the matter.

Rosselló said the government is looking for the most accurate count and to understand how people lost their lives to account for the impact of these storms, as well as identifying ways in which deaths can be prevented in future disasters.

Rosselló also announced Monday that he requested the creation of a panel of experts to examine current death certification processes.