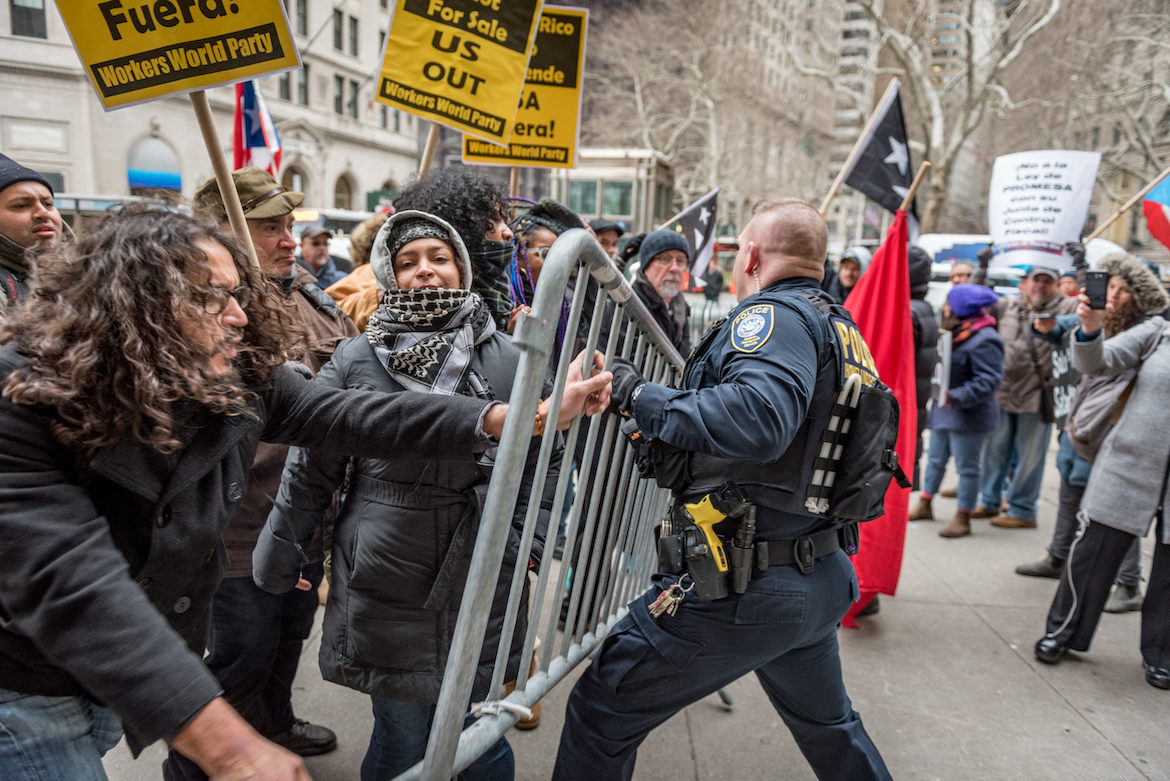 A Homeland Security officer intervened with a photographer during a rally in front of Alexander Hamilton U.S. Custom House.

Outside the Alexander Hamilton U.S. Custom House in New York, where a “listening session” of Puerto Rico’s Fiscal Control Board was held Thursday, federal police prevented a photographer with the Center for Investigative Journalism (CIJ) from doing his job and was prohibited from entering the building. Inside, the Board held a session called “The Future of Puerto Rico’s Energy Sector,” with an agenda that included some of the big players in the energy sector.

For Puerto Rico, a U.S. unincorporated territory that has been trying to recover from the landslide of Hurricane María, the future of its public energy utility is at the center of its rebuilding process, with 40% of residents still lacking electricity four months after the passage of the storm. At the same time, the island’s governor Ricardo Rosselló recently announced his intent to privatize part of the utility, which is in the midst of a bankruptcy process under the so-called Promesa law, like the territory itself.

In the morning, Homeland Security agents decided to put a barricade to demarcate a protest area after the demonstration had begun. The protest was organized by the Call to Action On Puerto Rico, a collective based in New York and other cities in the Eastern U.S. It seeks permanent solutions to the crisis in Puerto Rico from an anti-colonial, pro-independence perspective.

As the officers quickly sought to block the building’s entrance in the middle of the manifestation, they pushed through people with the barricades, including the photographer, who was taking pictures. He told one of the Homeland Security agent that he was a photojournalist and showed him his New York-issued press ID hanging on his neck. The guard asked him to go inside with him.

Once inside the building, the officer inquired the photographer about the press ID and asked him to hand it in even when it was clearly visible. He further required yet another valid ID that acknowledged his N.Y. residence. The photographer refused and a discussion ensued. A few minutes later, the Homeland Security officer and his superior told the photographer he wasn’t allowed to go inside and required him to leave. The officers said the “Head of Security of the Promesa Board,” took the photographer off the list of registered attendees after the photojournalist asked who made the final call. Roberto Escobar, a former federal agent and president of ESC Group, a private security firm, is in charge of the board’s security matters, according to a board spokesperson.

Moments after the incident between the Homeland Security officers and the photojournalist, a reporter for the CIJ asked the board’s press staff and Escobar if there was any way they could reconsider and allow him in. Escobar’s response was that if the photojournalist issued an apology to the Homeland Security officer, he would reconsider his decision.

The CIJ reached out to the board’s public relations person, José L. Cedeño, to discuss the matter and after an hour of going back and forth, he said the photojournalist wouldn’t be allowed in. He stated that the federal agents said “he acted on a violent manner and he didn’t wanted to present his ID, as the protocol established.” The CIJ replied that was not the case.

“Who should we believe, then?,” the CIJ asked Cedeño. The board’s spokesperson never replied the question. The CIJ then asked him to listen to the photojournalist’s version. He didn’t answer.

“There was an access protocol and he did not comply,” reads Cedeño’s last communication.

At the end of the day, the photojournalist was not allowed inside the building and do his job.

A short video recorded by a CIJ reporter shows how the Homeland Security agents pushed through people with the barricades during the protest, without warning, putting them in place after the manifestation had already started. Prior to the incident, the protest was taking place inside a previously established perimeter in front of the Alexander Hamilton House, yet no barricades were in place at the entrance of the building. When setting the new perimeter, the incident with the photojournalist took place.