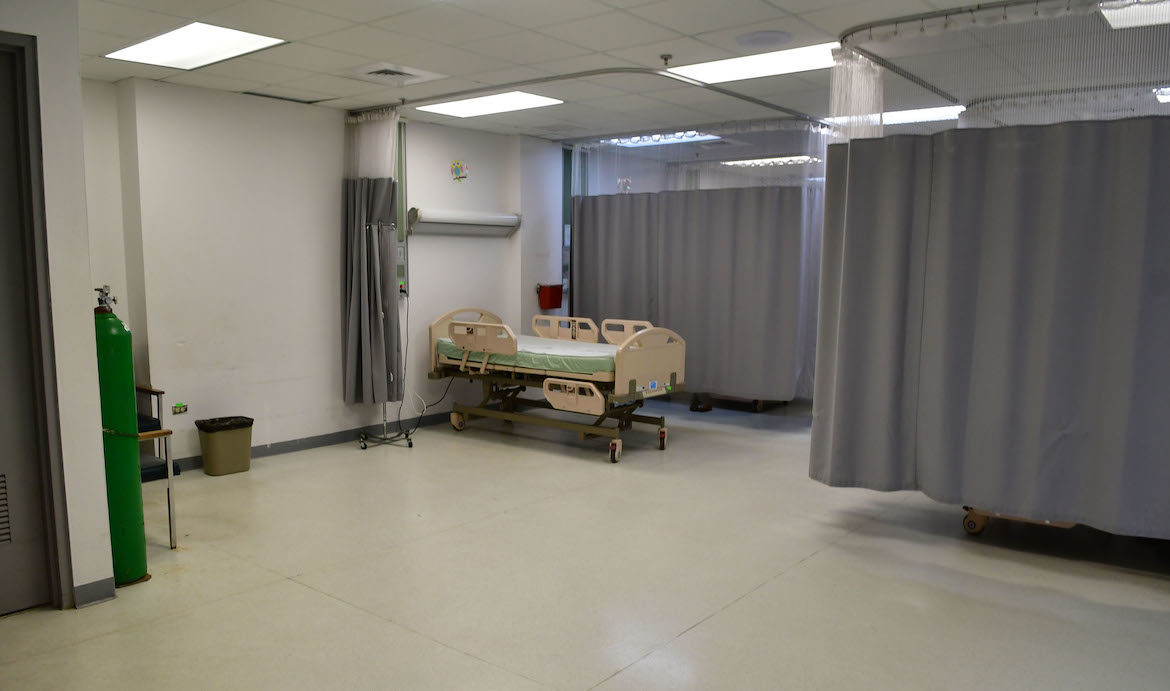 View of the Emergency Room in Cataño, PR.

The government of Puerto Rico did not follow guidelines from the Center for Disease Control and Prevention (CDC) in Atlanta to fill out death certificates after Hurricane María, which suggests attaching a special form to link the death to a natural disaster. The Center for Investigative Journalism (CPI, for its initials in Spanish) discovered that the federal agency waited 36 days after the hurricane to send the documents, which include the special form, to the Puerto Rico Health Department and the Demographic Registry.

“The correct protocol and laws where used,” insisted Héctor Pesquera, Secretary of Public Security, in November, after questions arose about the official numbers of deaths related to the emergency.

At that time, when asked about the lack of a clear protocol for accounting deaths, Gov. Ricardo Rosselló told BuzzFeed News: “It’s ok [the protocol], that is not the case. There are clear criteria.” He added that the officials had been “working on that and they have been meeting with hospitals, crematoriums, Forensics Sciences and they have already distributed the protocol.”

However, the CDC guidelines suggest that each standard death certificate have an attached form titled Epidemiological Disaster Mortality Surveillance. That enclosure is identified as form VI.I and the CDC instructs that it be filled out for all disaster-related deaths, which include hurricanes, tornadoes, flooding, earthquakes, heat waves, technological disaster, terrorism and others. In Puerto Rico, the government did not use the form identified by the CPI.

The form allows entering information about the specific circumstances of the death, details of who recovered the body, if the cause of death has been confirmed or not, and whether the death is directly, indirectly, possibly or indeterminately related to the disaster. It also includes structural collapse, electrocution, drowning, a fall or intoxication, among the specific causes of the death.

Although the government has insisted that the protocol it followed during and after the hurricane was the CDC’s, the fact that it did not use this V1.1 form raises the question of whether officials knew the process that they should have followed and if that would have permitted to clearly establish which deaths were due to causes related to the emergency.

A week ago, in an interview with Latino Rebels in Aspen, Colorado the governor changed his response to the question of the effectiveness of the protocols. “We recognize that the protocols we had at the onset were not the best or not good,” he said.

What the CDC says

The CDC assured the CPI that they shared with Puerto Rico’s Department of Health the orientation documents and mortality resources related to disasters to help identify the deaths linked to hurricanes; and this was confirmed in writing by the Health Secretary.

Specifically, the CDC shared the Toolbox for investigation the scene of the death and the Reference Guide for the Certification of Deaths Related to Disasters, said the federal agency in written statements. Both documents are only available in English, it confirmed.

“In October 2017 the CDC shared the mortality resources related to disasters, which include the Disaster Mortality Surveillance active form and with the Puerto Rico Office of the Demographic Registry in December 2017,” said a spokesperson of the agency.

The Epidemiological Disaster Mortality Surveillance form V1.1 is part of the second document the CDC sent, Reference Guide for the Certification of Deaths Related to Disasters, though one may have to navigate among several links to find it. As for the Toolbox, it also has additional forms, among them, the one for hurricane disasters, on page 25.

The CDC did not want to answer to which specific official they sent these documents to nor the precise day. “Contact the officials in the Puerto Rico Health department to find out if they used these resources. The CDC develops tools for disaster surveillance that states and territories can find to be useful after a disaster. The states or the territories can adapt those resources, as necessary, or chose not to use them,” said the CDC spokesperson. 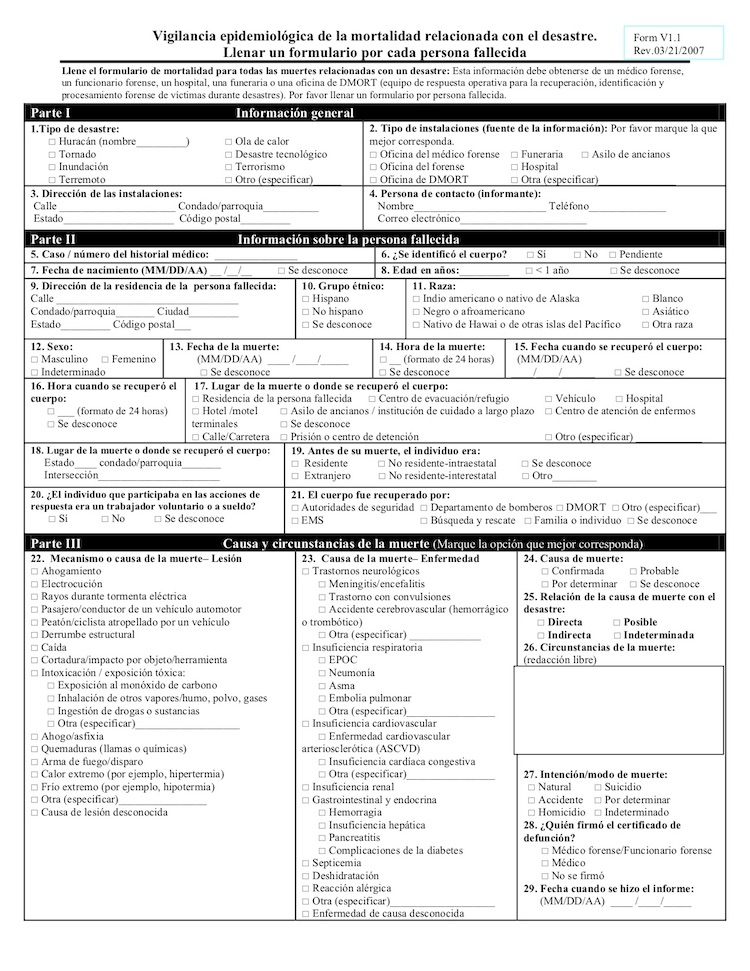 The government sent an e-mail

The CPI revealed a few weeks ago that the government also didn’t instruct doctors or hospitals about the classification of a victim of a cataclysmic storm or X37, which is part of the International Statistical Classification of Diseases and Related Health Problems, established by the World Health Organization.

Despite the existence of the Epidemiological Surveillance of Mortality Related to Disaster and the X37 classification to link a death to a catastrophic event, as was Hurricane María and its aftermath, the government of Puerto Rico never established an emergency protocol that would use any of these tools.

Dr. Eda Rodriguez, forensic pathologist of the Institute of Forensic Sciences (IFS) and ex-director of said government agency, confirmed two weeks ago to the CPI that neither the IFS nor the Health Department instructed forensic pathologists regarding the circumstances of the deaths related to the disaster and that a special protocol to link those deaths to the disaster does not exist.

At the closing of this edition, the Department of Health has not explained why this form, established more than 10 years ago by the CDC, was not used. When asked if the agency used the V1.1 form, its Press office sent written statements of the Director of the Demographic Registry, Wanda Llovet, who said “on October 24th, 2018, the CDC’s National Center for Health Statistics (NCHS) sent an email message to all jurisdictions, announcing the publication of the reference guide for the certification of deaths related to natural events caused by humans, chemicals or radiation.” These statements coincide with those of the CDC, though these are more precise regarding the date when the documentation was received. But that doesn’t answer the CPI’s question of why this form wasn’t used.

What the government did share via email was another document sent by the NCHS assigned to the CDC, early in October, with general instructions on documenting hurricane-related death certificates.

The document has a mere three specific sentences about how to fill out death certificates and isolated examples of the certificates. Those certificates bear no relation to the Mortality Surveillance form V1.1 nor to the guide, as the CPI confirmed. 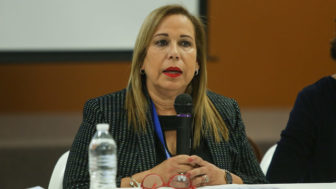 Llovet had sent CPI a copy of this Oct. 2 email which was sent to the Association of Funeral Home Owners, the Hospitals Association and the IFS with “information related with the completion of causes of deaths (CDC) associated with Hurricane María.” Though Llovet provided copy of the electronic message, the Executive President of the Puerto Rico Hospitals Association, Jaime Plá, told the CPI that he never received the email.

Due to the lack of forensic pathologists in the IFS, during the emergency, doctors in clinics and hospitals were forced to complete death certificates that the IFS would ordinarily handle. Neither did they received   instructions from the goverment on how to fill out the causes of death linked to circumstances related to the hurricane. Neither were they informed that they had to attach the form, as Víctor Ramos, president of the College of Surgeons confirmed to the CPI.

-Weren’t you given additional instructions on how to fill out this V1.1 form,? The CPI asked.

-Did the government include this attachment, which exists since 2007 in the CDC protocol for death by disasters?

-“Not at all,” the doctor answered.

-Should the government have instructed doctors about this document so it could have been attached to each death certificate, as protocol dictates?

-“Yes, they should have, given that they knew we didn’t have this document,” Ramos insisted.

The doctor said that during the emergency he had no knowledge of the existence of the form. It wasn’t until the beginning of this year, when the public issue arose about this subject that he learned about the CDC protocol which includes the form, after he had a conversation with the ex-director of the IFS, María Conte.

Last Saturday, June 23, Alba Calderón, Director of the Demographic Registry’s Legal Division, held a conference with the College of Physicians’ steering committee to advise them of the different death certificates and to hand them the Amended Manual for Doctors and Hospitals, which establishes a procedure to fill out death certificates. The Amended Manual makes no reference to the Epidemiological Disaster Mortality Surveillance V1.1 form.

“They gave us this amended manual with its instructions. Honestly, I have never seen the original,” Ramos said.

According to the President of the College of Physicians, the document is very general, and is “not too informative” regarding the instructions on how to fill out the death certificates in case of atmospheric events. The CPI reviewed the document and it barely mentions once, in a phrase, the concept of “atmospheric phenomenon.”

The section of the certification regarding the cause of death in the DR amended manual has two parts. The first one is to report immediate causes and conditions before death. The second part is for informing all the other diseases, injuries and physical or external conditions that could have contributed to a person’s death. It is here that it is requested to include if the death happened due to an atmospheric event. 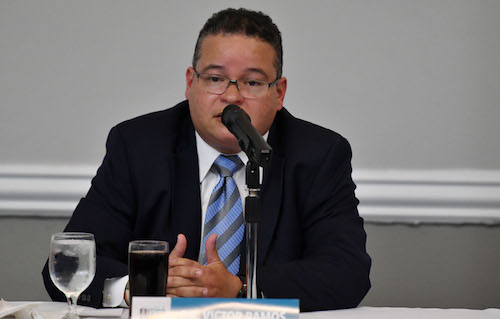 For Ramos, it is not specific in its instructions because it doesn’t address the principal issue of how a doctor will link the death to an atmospheric event, which was the problem after Hurricane María.

“I think the document needs to be worked on further, to make it clearer and more specific. If we are going to keep doing this, something which we don’t ordinarily do, we need to know how to do it,” insisted Ramos.