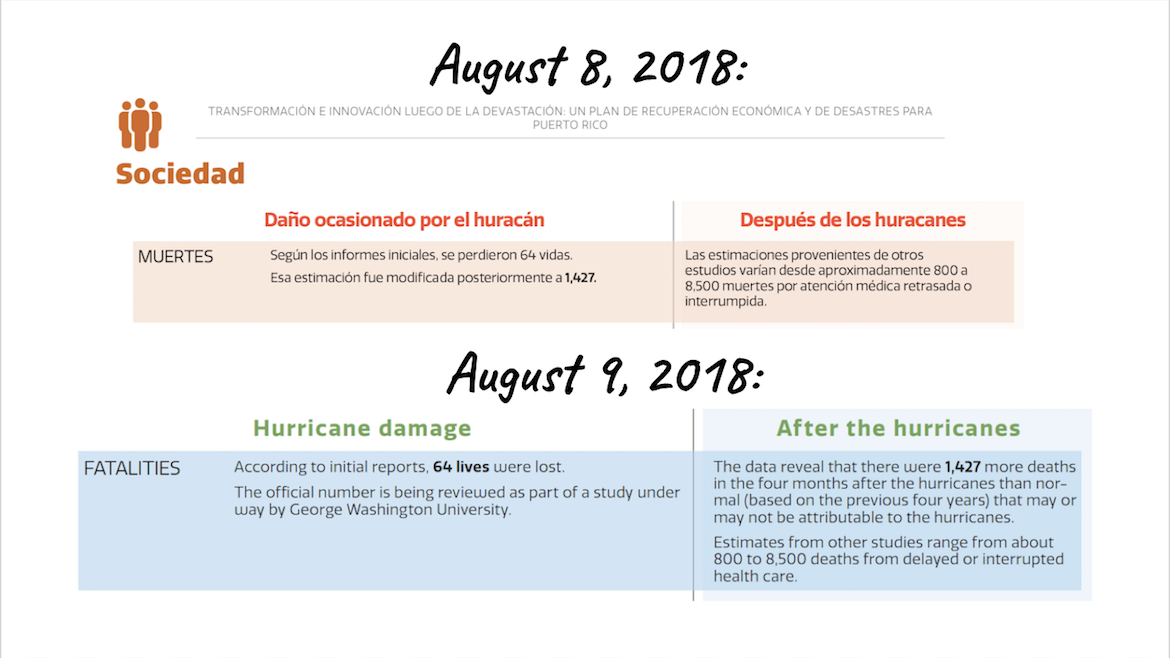 The Government of Puerto Rico did it again. Far from contributing to the transparency and clarity associated with the issue of Hurricane María-related deaths, it published a confusing, two-sentence statement in its draft of the Economic and Disaster Recovery Plan, implying that the absurd figure of 64 fatal victims had been revised in June and increased to 1,427. There was no such revision.

There is no new official list of names of people killed by the storm.

The mistaken way in which these two sentences are written led the The New York Times to err in a story published Thursday entitled “Puerto Rican Government Acknowledges Death Toll of 1,427,” which in turn was repeated by some of the main media outlets in the United States. Hours later, the Government itself distributed written statements, first in English, by the Secretary of Public Security and the government representative in charge of the official death toll, Héctor Pesquera, clarifying that 1,427 “is not the official number” (in bold), disavowing The New York Times.

“That number was not the result of an independent study—it is simple math. This is not the official number of deaths attributable to Hurricane María,” said the statement which was later sent in a Spanish version to Puerto Rican media.

Pesquera said the 1,427 is just a statistical calculation of the excess deaths that occurred from September to December, the last four months of 2017, compared to four years earlier. This number had already been publicly disclosed on June 1 by government Demographer, José A. López, at the Puerto Rico Health Department’s Emergency Preparedness Summit and was published by several media outlets, including the Metro newspaper and The Associated Press.

The government’s mistake is that page 29 of the plan says: “According to initial reports, 64 lives were lost. That estimate was subsequently modified to 1,427. Estimates from other studies range from approximately 800 to 8,500 deaths related to delayed or interrupted medical care.”

Something Pesquera doesn’t acknowledge in the communication he released on the issue, is that the final version of the plan submitted to U.S. Congress that Thursday night and published on the Public-Private Partnerships Office’s website in the morning -after The New York Times’ publication- underwent changes and clarifies the language related to the deaths.

“According to initial reports, 64 lives were lost. The official number is being reviewed as part of a study in progress conducted by George Washington University. The data reveals there were 1,427 excess deaths in the four months after the hurricanes, which may or may not be attributable to the hurricanes. Estimates from other studies vary from 800 to 8,500 deaths due to interrupted or delayed health services.”

It is clear that the Government of Puerto Rico has a problem explaining the issue of Hurricane Maria’s death toll. The continuous change of versions is already its modus operandi.

The Center for Investigative Journalism (CPI, for its initials in Spanish,) academics and other media including The New York Times itself have been doing calculations and estimations since December 2017. The CPI revealed before the government that the estimated deaths for those months should exceed 1,000 people.

The mistake in the draft was obvious, since the “64 lives” do not respond to “initial reports” but to the Government’s official list of 64 flesh and blood people. These are cases that, according to the DPS, were certified one by one by Puerto Rico’s Bureau of Forensic Sciences. This is not an “estimate,” as suggested in the draft of the published plan.

In addition, on the next page of the 411-page plan, the Government changes the language, which must have raised doubts: “Although the Puerto Rico Department of Public Security’s official death count was initially 64, the total seems to be much higher. On June 13, the Government of Puerto Rico revealed that there were 1,427 more deaths than normal in the four months after the hurricanes (compared to the prior four years) and will update the official count after a George Washington University study is completed.”

The June 13 date contained in the plan is another Government mistake, which was later corrected in Pesquera’s press release.

In all honesty, the commotion also responds to the lack of corroboration of the information by The New York Times and the media that followed the story. Why didn’t anybody ask for the new list of names, nor elaborate on how the Government arrived at this new figure?