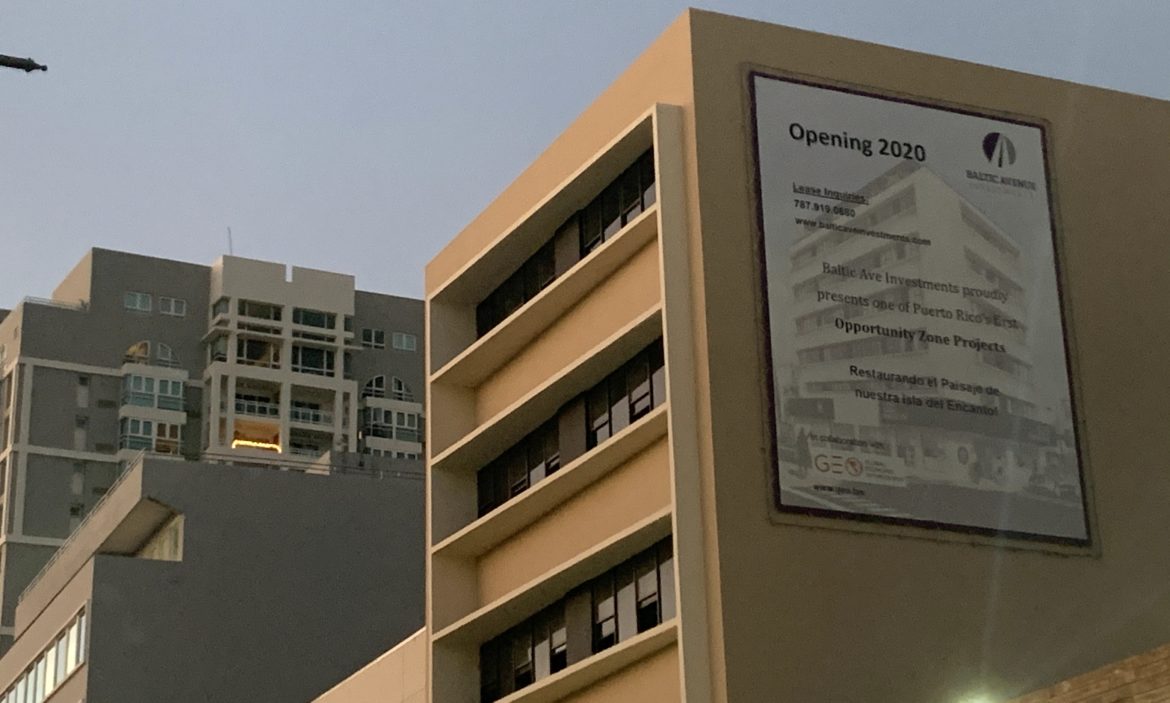 The tax exemptions that the government of Puerto Rico intends to extend to investors through the Opportunity Zones Act “may not comply” with the Fiscal Plan. Tax credits of up to 25% and exemptions in the payment of municipal taxes were some of the red flags raised by the Fiscal Control Board as a “cause for concern.”

“There are provisions of the law that apparently make it inconsistent with the government’s Fiscal Plan… The municipal exemption provision could be burdensome to the municipalities,” Fiscal Control Board Spokesman Edward Zayas told the Center for Investigative Journalism (CPI, in Spanish).

Former Gov. Ricardo Rosselló signed the Opportunity Zones Act on May 14 but it has not been enforced because it still lacks a regulation for its implementation. Although so far this law is practically null, in August the government approved a list of commercial activities that could be recognized as Priority Projects in Opportunity Zones.

The Fiscal Control Board also questioned the designation of priority projects in the Opportunity Zones because they could clash with the list of critical infrastructure “priority projects” established in Title V of the PROMESA law.

“The procedures for the designation of priority projects could include projects already contemplated in the Fiscal Plan instead of limiting the benefits to new or incremental investment,” said the Fiscal Control Board.

Department of Economic Development and Commerce Secretary Manuel Laboy was unavailable to answer the CPI’s questions about the Opportunity Zones. When the CPI insisted on its request for information, the agency said it would send a statement “with information” related to the matter “at the end of this week.”

In October, Laboy said that between five and 10 projects had expressed interest in the Opportunity Zones incentives, and that one had made a formal request, and that the regulation would be ready “in the coming weeks.”

The Opportunity Zones were designated as part of President Donald Trump’s tax reform and offer a 37.5% to 20% reduction in the federal tax rate to funds that invest in “low-income communities.”

Since that Act was passed in 2018, state and territory governments began competing to attract investors seeking Opportunity Zone benefits by creating laws that add exemptions to those already granted by the federal mandate.

Some states include additional exemptions to be more competitive. In Puerto Rico’s case, the Fiscal Control Board stressed that the local Opportunity Zones Act is more generous than other state laws in the U.S. mainland. State governors can designate only 25% of the low-income areas as Opportunity Zones. In contrast, an exception from Congress allowed almost 98% of Puerto Rico to be declared an Opportunity Zone.

The U.S. Department of Treasury estimates that Opportunity Zones exemptions will sum $1.6 billion between 2018 and 2027. Nonprofit organization Good Jobs First said that this law will have a direct negative impact on tax collections on a state level.

The government of Puerto Rico has not estimated the cost of the exemptions it would offer through the Opportunity Zones law. The approved legislation states that the director of the Office of Industrial Tax Exemption, Javier Bayón-Torres, will report to the Committee on Priority Projects in Opportunity Zones “on the economic and fiscal impact of this law” after the close of each fiscal year.

The Committee, which is attached to the Office of the Governor, is composed of the Chief Financial Officer, Omar Marrero, who chairs it, as well as the Chief Investment Officer, the Executive Director of the Fiscal Agency and Financial Advisory Authority (post also held by Marrero), the Executive Director of the Public-Private Partnerships Authority, the Secretary of the Department of Economic Development and Commerce, a member appointed by the Senate, and a member appointed by the House of Representatives.

“The fiscal impact of the Law depends on regulations that have not yet been released. The Board believes the incentive should focus on new and incremental investment … Those responsible for releasing the regulations to enforce the provisions of the law are the Secretary of Economic Development and the Secretary of the Treasury (Francisco Parés); it is with them that we have been in communication since the corresponding bill was submitted,” said the Fiscal Control Board spokesman.

“The local law seeks to provide additional incentives to what is given at the federal level. If the local law remains in line with the federal law, it would still keep Puerto Rico somewhat more competitive versus other states … If everything is eliminated, we definitely fall into a situation where it will not be so attractive to invest here,” said Giovanni Méndez, tax attorney of the Baltic Avenue Investment firm.

Baltic Avenue acquired an abandoned building located in an area designated as an Opportunity Zone on Ponce de León Avenue in Santurce. Investors who bought the property to renovated it it as rental offices benefit from exemptions from this federal law. Because there isn’t a regulation yet to implement the local law, they cannot even request additional exemptions in Puerto Rico.

“I know of some funds that are operating under the federal law, but I don’t know of any that have already benefited from these additional incentives (through the local law). So, if they’re projecting any of these benefits in their calculation and in their return on investment, they have no assurance that they will have those benefits and they would have to tell their investors. Because there is no regulation, I’m not aware that anyone has been able to generate any of these credits so far,” Méndez said.

“That project (on Ponde de León) began before the local law was approved, that was something that was explained to the investors, it was a challenge when it came to raising the funds because we had to tell them ‘we don’t know about those benefits.’ The law was not approved at the time and we were talking to them about something that was in the works. There are investors who decide to continue and there are others who don’t and prefer to go to another state because of the competitiveness issue,” Méndez added.

While investors wait for the regulation to be published to apply the local Opportunity Zones Act, there are investment firms that have already begun to buy properties benefiting from federal exemptions. That’s the case of real estate company Lifeafar, which acquired a building on San Francisco street in Old San Juan to convert it into a boutique hotel that will also have rental rooms under the Airbnb digital leasing platform. Since Lifeafar acquired that property in front of Plaza Colón in Old San Juan in May, a food court and bar that operated on the first floor of the building remains closed.

On Dec. 10, Lifeafar sent a notification to its investors confirming that the company has a new project for review and investment in a “renowned ocean view hotel that will be an Opportunity Zone.” In the communication, Robbie Chaudhri, from the Lifeafar investment team, said the project is confidential and asks interested parties to sign a non-disclosure agreement to receive information about it.