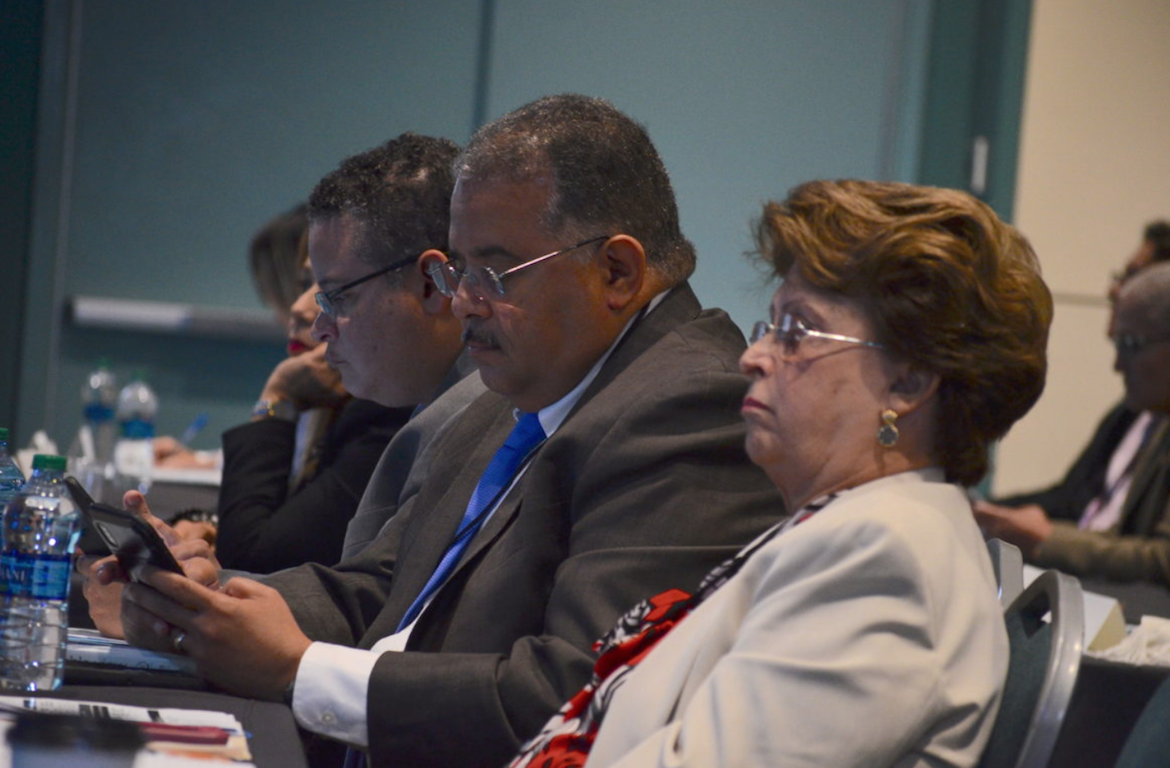 Rafael Rodríguez Mercado, Secretary of the Department of Health

Despite how crucial it is to immediately respond to traumas after an earthquake, Health Secretary Rafael Rodríguez-Mercado said there is no formal plan or instructions, nor are they needed, for a massive response to trauma because doctors, as part of their training, know what to do in case of emergencies, aside from the fact that each hospital has its own strategy for that.

Experts interviewed by the Center for Investigative Journalism (CPI, in Spanish) differ from Rodríguez-Mercado. And his deputy in charge of the Río Piedras Medical Center, the executive director of the Health Services Administration (ASEM, in Spanish), Jorge Matta-González, disagreed with him.

“All doctors are trained on what to do in times of emergency, hurricanes, mass casualties, all these problems. In an emergency such as an earthquake, the most commonly seen cases are orthopedics and neurosurgery,” said the Secretary in an interview with Radio Isla.

His comments came after the CPI revealed that he had not shared a plan or instructions with his medical trauma team to handle possible massive number of cases after a major catastrophe following the earthquakes that have been rattling Puerto Rico for the past several weeks.

The head of the Health Department has not not reach out to Trauma Center Director Pablo Rodríguez-Ortiz, who said he was unaware of this administration’s strategy to attend to an unexpectedly high volume of patients or the resources available for that. Rodríguez-Mercado also failed to inform Rodríguez-Ortiz about the current written plan, namely the Public Health and Medical Services Emergency Management Operational Plan.

Rodríguez Ortiz, the principal expert in Puerto Rico on trauma, and president of the Puerto Rico Trauma Committee before the American College of Surgeons, warned that 80% of earthquake victims die if they are not treated during the first hour of distress.

Matta-González acknowledged that he did not get in touch with the Director of the Trauma Center, but that he did talk to the administrator, Víctor Medina, despite the fact that the person responsible for a clinical response is the hospital’s medical director, not an administrative official who has no expertise in patient treatment and care.

“We’re in constant communication with the Trauma Center’s administration. The hospital doesn’t respond to the medical director, but to a health services administrator,” Matta-González said in an interview last Monday during the CPI’s radio program, “Agenda Propia.”

“If he’s worried, his job as a traumatologist would also be, if he wants to offer an orientation or wants to write a paper on how to work in trauma medicine for the general public, then he should do it,” the Secretary said referring to Rodríguez-Ortiz in an almost derisive tone. This, despite the fact that the person in Puerto Rico responsible for establishing emergency response plans is Secretary Rodríguez-Mercado.

Rodríguez-Ortiz claims that the Trauma Hospital needs autonomy to act and to handle their resources without needing ASEMS´s authorization or the Secretary, who is ASEM’s legal supervisor. As recently as December, Matta-González disallowed the Trauma Director’s initiative to seek federal CDBG-DR funds to build a new Trauma Hospital, given the structure’s risk of collapse, which engineers have pointed out.

For more than a week now, the CPI has been requesting an interview with the Health Secretary to get direct answers to questions about how trauma patients will be moved and the condition of the Trauma Center’s building , among other questions, but it has not been granted.

Is there a plan?

Contrary to what the Health Secretary said , Matta-González assured there is a plan in case of massive trauma cases occur. Without offering much detail, in a press release, Matta-González said after the CPI published the story, that they would be activating the available mobile medical units — the one that was sent to Guánica, in the southern coast of the island, near the epicenter of the quakes, and the one at the Medical Center in San Juan. He also said he would enforce collaborative agreements with area hospitals or would seek support from the federal government.

Private hospitals are not prepared to handle trauma cases because they don’t have the resources, equipment or blood banks required for these cases, Rodríguez-Ortiz said. For decades he Trauma Center Director has been raising his concerns on the need to strengthen the State’s trauma service and build a new, modern hospital.

Meanwhile, Gov. Wanda Vázquez-Garced responded to the CPI’s questions by saying she trusts in “God and the Virgin Mary” that a major earthquake will not hit. She also said all hospitals have their plans and strategies, but “what matters is not necessarily that it is in writing, but that it is executed, because many things are written, but never carried out.”

“I’m completely sure that the doctor [Rodríguez-Ortiz] will have the opportunity to get this information from the Secretary,” the Governor said Monday on Radio Isla, acknowledging the concern about the lack of information mentioned by the Director of the Trauma Center.

The Governor said the Health Secretary “has been in the southern area, where there is need, coordinating people’s medical requirements in all of the shelters.”

“The important thing is that the medical situation in the southern region is being handled [in coordination] with the mayors, with the health centers, in communication with the hospitals, and that any emergency situation that has to be addressed will be discussed with all of the appropriate persons ,” the Governor said.

Matta-González confirmed that the two mobile clinical units, purchased in 2009 for $2 million with federal funds to handle trauma, have an operating room and a lab, and the equipment is up to date. However, he has not granted the CPI a tour of the mobile units, as he promised during the “Agenda Propia” program last Monday.

That day, the CPI reported that the mobile clinical unit in Guánica was turned over to nonprofit organization Migrant Health Center with no medical supplies, to be used as a primary health center, according to the organization’s executive director, Dolores Morales.

The supplies being used in that unit are provided by NGO organizations such as Direct Relief, she said. Matta-González said on Monday, after the CPI published the story, that he was coordinating that the National Guard would operate the mobile clinical unit in Guánica. Meanwhile the Secretary said in a statement on Thursday that “the mobile hospital for emergencies and trauma was loaned to the Puerto Rico National Guard to provide medical care to the victims in Guánica.”

In written statements, Matta-González said these units have been used to “bolster the Medical Center’s services, as was the case of the response after Hurricane María. They have also been used to offer medical services in Vieques, after the evacuation of the CDT [Diagnostic and Treatment Center] there.”

Rodríguez-Mercado assured, that the vehicle is located on the Medical Center grounds, is in perfect condition and that one of the tents stored inside would be put up in front of the hospital.

In apparent response to the CPI story, Rodríguez Mercado said in a statement: “We will set up the tent as a precaution, not because something bad is happening. The idea is that if a stronger earthquake occurs and, by chance, it is necessary to evacuate an area of the Medical Center hospital, we would have that place for patients. If necessary, we would set up the other tents.”

Following the CPI’s investigation, Sen. Rossana López presented a resolution to request information on the use of these mobile clinical units acquired under the Luis Fortuño administration.

The condition of the Medical Center’s structure

The head of ASEM said on “Agenda Propia” that after Hurricane María hit in 2017, they have been in touch with FEMA to address the recommendations submitted in 2015 by University of Puerto Rico’s Mayagüez Campus engineers, who advised conducting a specialized study about the Trauma Center’s facilities, which are at a “high risk of collapse” in case of an earthquake. The new study should establish the improvements that the Trauma Center requires, or if it is necessary to build a new facility, he said. The study is not yet underway.

The Medical Center structures where the Trauma Center is located, “are in good condition and are safe,” after the ongoing seismic movements affecting the Island, according to an evaluation by structural engineers, Matta-González said in a statement, in which he did not disclose details of who conducted the review and when.

According to Matta-González, “the work and tasks at the Medical Center are proceeding normally and there has been no increase in cases.”

Jaime Plá, executive president of the Puerto Rico Hospitals Association, said Monday that he participated in a telephone meeting led by the Health Secretary to coordinate the response to a possible collapse of hospitals in the southern region. He said the conversation focused on the transfer of intensive care patients to safer hospitals, in nearby areas less affected by the quakes, such as San Germán and Guayama.

During the meeting, in which FEMA, hospitals in the affected area, and government agencies participated, Plá recommended that the Secretary move intensive care patients “within a short mile radius” in case the roads are affected.