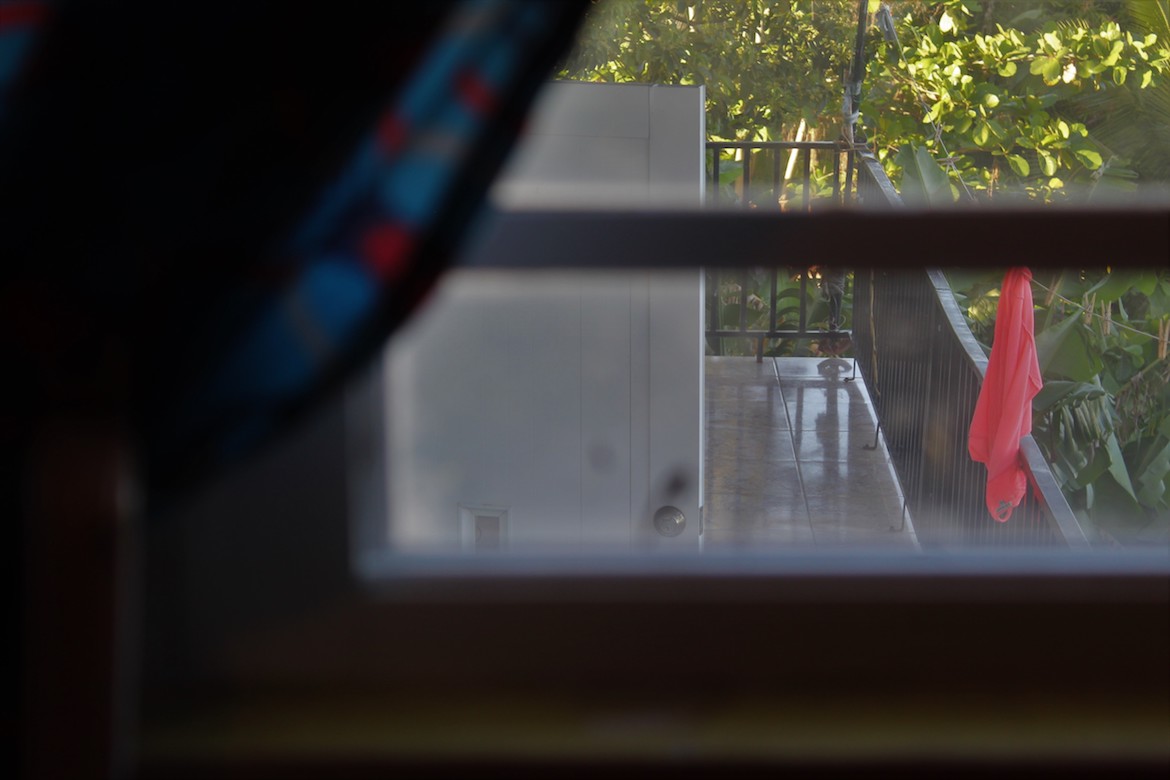 View from the window from where the journalist is preventively isolated as a precautionary measure due to coronavirus.

The wind gusts coming from the northwest hits the trees outside. I hear my dog’s chain drag across the hallway, outside my door

The fan spins as I look at the light brown ceiling. I have been in this room for more than three days, locked up preventively for fear of infecting others. It’s a self-imposed quarantine in which I’m caught between misinformation and government contradictions.

The clock ticks slowly, really slow. I look at it at all the time, anxiously looking forward to the end of these 14 days ahead. These are long hours during which I notice that water still filters through the wall that hasn’t been repaired for 30 months, after Hurricane María.

The clothes packed in my black suitcase four nights ago sit in a corner of my room as a reminder. It’s the only stuff that I was able to grab and bring to my town, Moca, in the westernmost part of the island, after escaping from my grandmother’s house.

That was because that same night, around 9 p.m., I opened an email that rattled my reality. I was working on my computer when a notification appeared on the corner of my screen from the Investigative Reporters and Editors (IRE), the organization that coordinated a training in New Orleans, in which I participated as a journalism student from Thursday, March 5 until Sunday the 8th.

Seconds later, I opened another email confirming the information and urging me to take precautions. A chill ran through my body. I could be carrying the coronavirus, making me a risk to others. I couldn’t even imagine how that virus, which started at an exotic seafood and animal market in Wuhan City, China, could have reached my body.

I called 787-729-6320 several times, an information line established by the Health Department for anyone who suspects having COVID-19. They didn’t answer the phone. “Tomorrow I have to leave early,” I thought. That night I wondered what to do, what steps I should take. I was confused and feared for my 80-year-old grandmother, who sometimes has trouble breathing.

The Centers for Disease Control and Prevention (CDC) warn that older adults and patients with chronic diseases may become seriously ill if they contract COVID-19. The problem is that although the CDC believes that symptoms may appear two to 14 days after the original exposure, the virus may also be living in the system without showing symptoms. Time is ticking and increasing my risk of infecting my grandmother.

Several times during my week in New Orleans I wondered what would become of me if I came in contact with someone suspected of having the coronavirus. I didn’t feel confident. In Puerto Rico, the now-ex-secretary of Health, Rafael Rodríguez-Mercado, had said it was unlikely that the virus would reach the island because it didn’t receive “direct flights from China.” Meanwhile, State Epidemiologist Carmen Deseda-Colón, said on the radio that the coronavirus had spread to Italy because it was a country “close” to China.

I look through the window and see how the sky tries to turn blue and the clouds white. I’m not used to hearing a knock on the door, opening it carefully, rag in hand, to grab a plate of shrimp ‘asopao,’ perfect for a rainy day. This time I don’t know whether to cover my mouth with a mask, hide in my room, wander around the house, or go to a hospital. 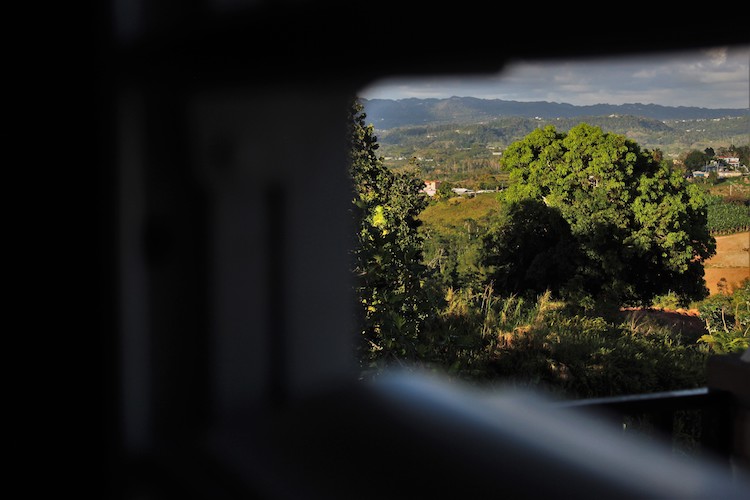 Méndez González has been in preventive isolation since Tuesday night, March 10

Sitting on my bed, I grab my cell phone. It’s the closest thing to being on the other side of the window. I noticed a missed call from 787-765-2929. I call back, and it’s the Puerto Rico Health Department. A recording answers.

I unsuccessfully called the regional office of the epidemiologist in Mayagüez and the sub-regional office in Aguadilla. Then I called the metropolitan region office and a man answered, who then transferred the call to a woman.

She told me that I did not meet the criteria to be a “suspected case,” as I had not traveled to South Korea, China, Iran, or Italy. I explained that I felt at risk because I had been in a training in which 1,100 people had interacted for four days in the same hotel. At that time, at least one case had been reported as having the disease — that number has grown to two. However, the woman told me that in my case, a quarantine wasn’t necessary.

I wasn’t happy with the answers. Should I be considered a suspected case of coronavirus? Should they test me? Give me precise instructions on how to preventively isolate myself? I call my general practitioner. He listens to me for a few minutes and recommends to stay home. “It’s everyone’s responsibility,” he says. He did not hesitate for a second to give me an excuse for the Dean of Students of the University of Puerto Rico (UPR) in Arecibo so that I could be absent for the necessary 14 days.

As soon as I found out about my risk of having contracted COVID-19, I called one of my professors. He recommended that I call my doctor so he could tell me what to do. He was always there for me to guide me step-by-step. That same morning, I called the Dean of Student Affairs.

The person who answered my call urged me to go to the hospital (which was the opposite to the recommendations of many health professionals). Hours later, I called the Rectory Office where they told me that I could go to classes because I did not show symptoms or came from a level 3 or level 4 country, but that they were going to report my case to the UPR Central Administration, the Health Department and the State Department anyway. I didn’t hear from them again.

I go to my Facebook profile. On my wall I learn it’s March 13, my brother’s birthday. There will be no party because everyone in the house is in quarantine. My other brother, the nine-year-old, took it easy at first because he didn’t know what was going on. He now sleeps with my mother or in the armchair in the living room because I have taken over his room.

I remember that the state epidemiologist urged that citizens practice social distancing for 14 days. COVID-19 spreads through “particles” that escape the body when coughing or sneezing, she explained. However, when the press conference ended, the epidemiologist tried to greet a television reporter with a hug and a kiss. 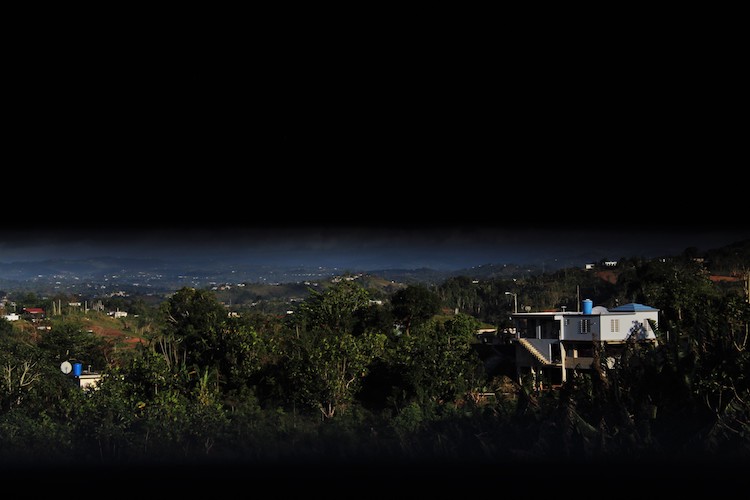 Due to the preventive isolation and quarantine in which many people around the world find themselves, the #FotoDesdeMiVentana is becoming popular

That same afternoon, CBS News Reporter David Begnaud said the CDC notified him that the delay in submitting the test results was due to the fact that the Health Department had sent the samples of the suspected COVID-19 cases wrong and with inaccurate documentation. That unleashed the pent-up dissatisfaction with Rodríguez-Mercado’s job performance since Hurricane María, and a few hours later his abrupt departure from the government happened.

Although my mother sometimes works more than 10 hours a day to help support the family, the situation forced her to call in sick and notify her supervisor that she wouldn’t be able to go to work because she would be in quarantine.

Again, someone knocks on the door. I hear the dog drag the chain outside. I open it and see my nine-year-old brother, who looks at me and smiles. In his gaze, I see the innocence that I would like to have right now. It is worrisome to think how the coronavirus has not only hit our island’s economy, but my family’s routine. I only wonder how many more people have been trapped in a quarantine because of scant information and the government’s contradictions.