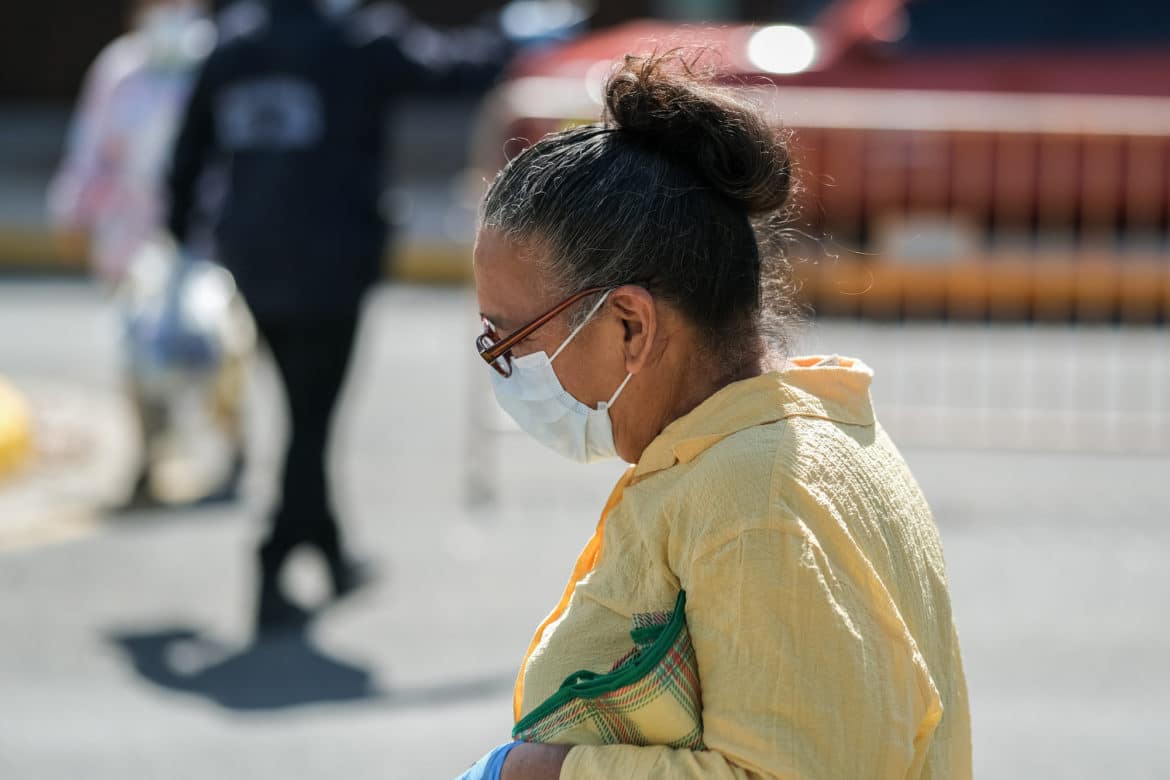 Manuel is 86 years old and lives alone in the Venezuela community in Río Piedras, in San Juan. To get to his small house , you have to walk down a narrow set of stairs on the edge of the road. He is sitting on his bed, shirtless, but covered with a sheet in the middle of a hot Thursday in May. The aspiring priest who delivers food to him every day introduces us.

“It’s been a while, since I’ve seen you around here,” the man said, smiling, as he received his plate of hot food. We had never met. He held out his hand, and I didn’t know what to do. As I cautiously entered his home, keeping my distance, and wearing a mask and gloves, Don Manuel insisted that I shake his hand. I offered him my elbow, at his look of surprise and disappointment. I felt like I was being judged by the image of Our Lady of the Sacred Heart that decorated the living room.

In that moment, I understood better the situation  that many older adults are facing in the midst of the COVID-19 pandemic and the physical distancing rules. It was evident that all that information that we get through the internet and other mass media does not reach the entire population.

“You’re right. It’s been a while since I came here. The last time I came, I remember talking to Doña Guille for a while,” I said, after remembering that I came to the Venezuela neighborhood two years ago as part of a community water quality monitoring network project. Guille was the first name that came to mind. I needed to improvise.

He was the third person that theology student Samuel Pérez visited that afternoon. There were still six to go. Since March 18, members of the Río Piedras Fraternal Mercy Society have taken the same route to deliver food to older adults who live alone. The arrival of the bus bringing food to these neighborhoods is one of the most anticipated moments of the day since the curfew began two months ago and services to this population were reduced as a result of social distancing.

A few minutes from Don Manuel’s house, Doña Ana, 98, waits for Samuel with canned food. It’s her exchange for getting the plate of hot food. Her wooden house is small, unpainted and far from the street. Doña Ana donates a canned product every day and insists on returning the dishes from the prior day’s serving.

“Grab the bag because you’re about to drop it,” Doña Ana told the Catholic brother, who was holding the bag with the can of food and some juice.

As the weeks have passed since the curfew began in Puerto Rico on March 16, requests for food home deliveries to older adults living alone have increased for the different organizations that work with this population.

People who serve many of them no longer   meet with them in person   as a precaution. Physical isolation measures add a layer to the daily social isolation experienced by members of Puerto Rico’s older population.

Such is the case of Francisco, 73, an immigrant from Cuba, who currently resides in the San Felipe community in Río Piedras. His wife died in 2002 and more recently, the man was hit by a truck.

“This man was referred to us by his health insurance. We were told that the social worker could not provide the services,” said Samuel, speaking of Francisco as an example of how abandoned the elderly population has been since mid-March.

Hunger is compounded by mental health cases, and the lack of access to medical appointments and medications in the context of the curfew.

Not everyone who received food this afternoon came to their balconies. Among the older adults who were delivered a plate of food there were bedridden people and people with physical limitations.

“How have you been?” Samuel asked 61-year-old Ramón, who came out to pick up three plates.

“Well, mom fell and broke her ribs,” the man said while in front of his residence on a street in Cupey. He repeats the same thing almost every day to Samuel, as if it were new information. He’s a mental health patient, and since mid-March he is also the person in charge of watching over his 91-year-old bedridden father and 82-year-old mother who injured four ribs.

The situation isn’t much different at the eastern end of the island, in the town of Humacao.

At the headquarters of the Programa de Educación Comunal de Entrega y Servicios (PECES) in the coastal community of Punta Santiago, a makeshift drive-up system set up at the court is ready to distribute plates of food to people in the community.

“You’re going to take 12 plates, but I need you to tell me the name of the family and sign here,” one of the volunteers said to a woman who came to pick up food.

Within a half an hour, a total of 10 cars came to pick up the plates for their respective families.

“Are you going out to deliver food here in Punta Santiago too?” I asked Marta Lebrón, one of the delivery coordinators.

“Yes, we started this week and so far we’re doing it Monday, Wednesday and Friday. We go to people’s homes who don’t have cars but mostly we visit older adults who live alone. We’re waiting for the driver,” she replied.

The PECES van left at noon headed toward one of Humacao’s poorest communities.

“We want to go to the houses at the same time that we distribute the food at the basketball court because it’s lunchtime,” Lebrón said.

PECES has not yet received money from the government for the food it has been providing during this emergency, although it is working on and sending the information so that the Office of the Ombudsman for the Elderly refers them to receive federal funds available for this purpose.

I followed the van, not knowing how many houses would be visited. More than an hour later, I had written down in my notebook a total of 18 homes and 37 plates delivered.

Although the beach was empty, the kiosk area in Punta Santiago was crowded with people lining up to buy fried food and shellfish wearing their protective masks and more than four feet apart. On the lamp posts along the PR-3 highway there were posters for the “Puerto Rico Se Levanta” (“Puerto Rico rises”) campaign that became popular after Hurricane María in 2017. There were also signs promoting Humacao Mayor Luis Raúl Sánchez’s re-election campaign, touting him as “a hardworking man.”

Steps from the hustle and bustle at the seaside kiosks and the political campaign signs, a woman on Pargo Street waited in a housecoat on her balcony for the arrival of her plate of food. The elderly woman stood up from her chair and with a smile went to get two plates and sign the document that Marta gave her.

Ten minutes later, they had visited three other houses. Many were located on narrow, dead-end streets away from the Punta Santiago community’s main road.

As in Río Piedras, there were cases of people who could not go out to get the plates of food. Some were in wheelchairs and others spent most of the day in their beds.

“In that house that I just went into, the woman had a stroke and is bedridden. Her husband is in a wheelchair. Most of them are older adults here,” Lebrón said after leaving the fifteenth house.

“They still have the Christmas decorations up,” I noted.

“Yes, poor things, it seems that they haven’t been able to get anyone to help them take them down,” said the PECES employee.

It is the non-governmental organizations and community leaders who have taken charge of identifying and locating those older adults in need of services, mainly concerning food. However, their jobs would be more effective if the government had data or maps that would allow locating the elderly living in insecure conditions, who need food and are more vulnerable.

Having the information available could make a difference in terms of supervision and the distribution of these government resources to benefit the elderly, I thought aloud as I watched Marta make her delivery to the seventeenth house.

How difficult would it be to work with geographic information systems so that the Office of the Ombudsman for the Elderly or the Department of the Family would know where to direct the funds and resources they have?

While I asked myself those questions about geography and public policy, a man came out to his balcony to receive two plates of food. He gestured for Marta not to leave. Within a few seconds, the man returned with two mangos that he handed to the woman. They said goodbye with gestures of joy.

Marta’s gaze reflected the satisfaction of having completed an important mission.

“Yes, it’s tough, but we do it with a lot of love,” the woman said before getting in the van and returning to her organization’s headquarters.

(To protect the identity of participants receiving services from nonprofit organizations — and as the entities requested — the names disclosed in this chronicle are not real.)

Rafael R. Díaz Torres is a member of Report For America.