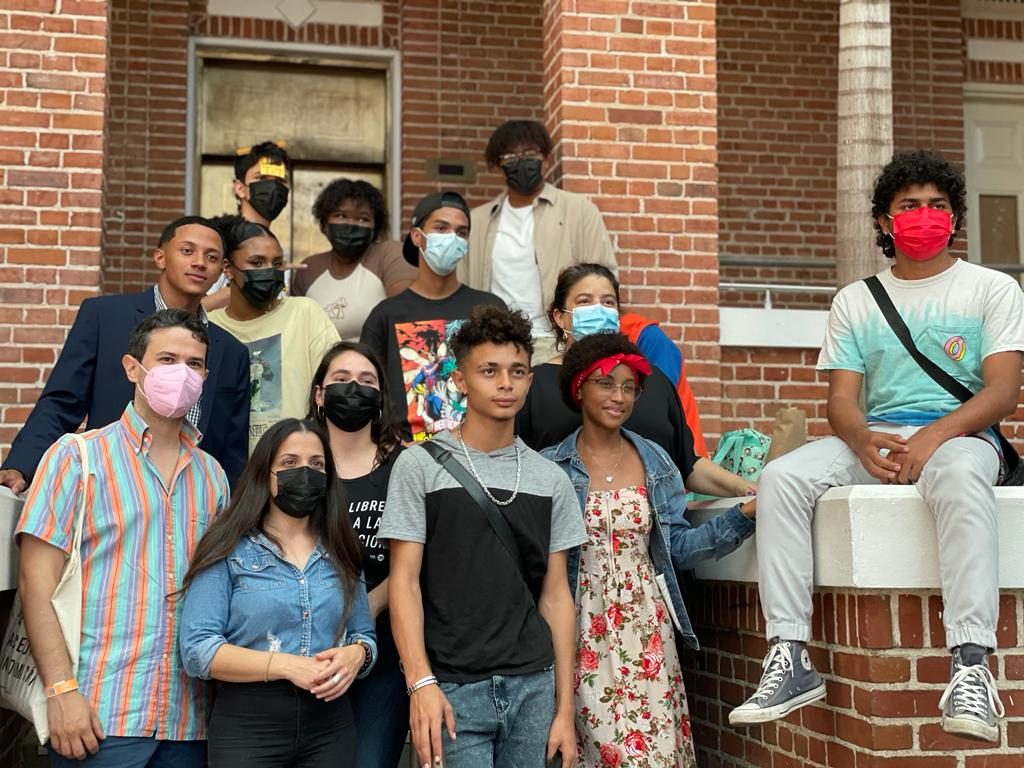 The group of youngsters from Loíza presented their final projects at the Puerto Rico Museum of Contemporary Art, in Santurce.

Acting as spokespeople for their community and applying critical thinking to analyze the news are the main lessons given to a group of youngsters from Loíza who participated in workshops during four months with a lawyer, a photographer, an anti-racism educator, librarians, community leaders, and, above all, many journalists.

“I know how to tell my truth.” “I learned about tools to identify fake news.” “I see different perspectives.” Those were some of the statements that students between the ages of 14 and 19 presented during the final evaluation of Medioscopio, a project to teach media literacy and develop citizen reporters.

On May 14, the inner courtyard of the Puerto Rico Museum of Contemporary Art (MAC), in Santurce became the exhibition hall for these students’ final projects.

For 13 consecutive Saturdays, the youngsters got up at 8 a.m. and went to the Gregorio Goyín Lanzó Cirino Community Center, in Parcelas Suárez in Loíza. The workshops, through this pilot project, supported by the Center for Investigative Journalism (CPI, in Spanish) and the MAC en el Barrio program were mostly offered there. The group of participants was convened by ASPIRA Puerto Rico, which has been working in Loíza’s communities for about 30 years.

The sacrifice was worth it. The students themselves expressed how they now feel more confident in understanding how the information they consume is produced and why they need to go the extra mile to thoroughly analyze and even transform it.

“Now it’s our turn,” said Yosuel O. Osorio, 19, a student at the University of Puerto Rico (UPR), in Río Piedras, referring to the fact that the group already has tools to fight the normalization of racial prejudice and the disinformation spread by the media and social networks. Now, he said, they can create and distribute their own content, in addition to approaching the media when talking about Loíza.

Osorio criticized the use that some news media give to phrases such as “the black sewage overflowed.” “Imagine how a young person who identifies as black feels. The correct thing is to use wastewater,” said the youngster from Loíza, where 36.8% of the population identified itself as black in the 2020 Census. Loíza has 23,412 inhabitants, according to the 2020 Census.

He also mentioned the importance of having obtained tools for verifying the information that is published. He gave emphasis to a photo popularized on social networks and in some media, in which a woman is identified as Adolfina Villanueva Osorio in front of a police officer. “That woman is not Adolfina,” he said. “Adolfina was a black woman, with a wide nose.” She was murdered by the police on February 6, 1980, while defending the house where she lived with her six children and her husband, in the Medianía Alta neighborhood of Loíza. The photo of the woman in front of the police is related to the evictions of the Villa Sin Miedo community, in Río Grande.

“On social media, we didn’t verify what was true or false, where the photos came from, who took them first,” said Aidelys Martínez De Jesús, 17, who this month graduated from the Belén Blanco de Zequeira High School in Loíza.

Through Medioscopio, youngsters learned about freedom of expression, the right of access to information, community communication strategies, how to combat disinformation, and tools to tell their own stories, those of their environment, and of their community. The initiative was made possible with the support of the Ángel Ramos Foundation, the Mellon Foundation, and Report for America.

When Gloriann S. Antonetty Lebrón, editor of revista étnica, offered a workshop on racial representation in the media in February, the youngsters created montages with photos from magazines and newspapers. The purpose? Capture the way they see themselves and how they think the press should cover the issues that concern them.

“I felt informed with this workshop. No one had ever talked to me about racism,” said Oneilys Benítez Fuentes, 16, a student at the Eladio Rivera Quiñones Vocational High School in Loíza.

A visit to the Puerto Rican Collection at the José M. Lázaro Library, at the UPR, to get first-hand knowledge about other sources of information, and a tour of the Paseo Tablado of the Piñones National Forest, to capture images of the area’s biodiversity along with photojournalist Doel Vázquez, complemented the program.

“Now I know a good place to go and how to go about gathering information,” said Adriel Fuentes Dávila, 16, about the visit to the Puerto Rican Collection at the UPR Library.

For Diego Martínez Rivera, 17, the experience was productive. “Each workshop that we took will be of use to me in the future,” said the student from the Belén Blanco de Zequeira School. During the meetings, Diego demonstrated his interest in environmental conservation and in resolving the issue of garbage on the beaches of this coastal municipality.

During the closing event at the MAC, where there were family members, friends and community leaders and municipal legislators from Loíza present, Osorio presented the group’s final project called “Atukiti: Aula Loiceña.” He, along with Jorge L. Santana Pizarro, Cybele Monserrate Rivera, Emely Ortiz García, developed this concept to discuss the problems and solutions that trouble Loíza.

A screen, placed in front of the public, showed the video of the first discussion with Tania Rosario, executive director of Taller Salud, which addressed the issue of machismo in the communities.

One of Medioscopio’s goals is to develop active youth in their community. “I learned how to be able to get involved in my community and in other communities, to see the problems and how we, as youngsters, expose them and talk about them. And to have our own voice,” said Martínez De Jesús, who will begin his bachelor’s degree in Business Administration this year at the UPR campus in Río Piedras.

The youngster was the spokesperson for the group that created the Facebook page “Revive el deporte loiceño.” Oneilys Benítez Fuentes, Adriel Fuentes Dávila and Martínez De Jesús developed this medium during the Medioscopio training with the goal of presenting solutions to the abandonment of sports facilities in Loíza.

They not only worked on developing their mission, but they produced the logo on the Facebook page.

Loíza’s municipal assembly members were invited to the presentation of the projects at the MAC and there they were told that during the workshop on the right of access to information, offered by the lawyer Carlos F. Ramos Hernández, a claim from the youngsters arose about the lack of information on how Hurricane María recovery funds are being used in the town. Municipal Legislature Chairman Joel A. Osorio Chiclana took on the task. In addition, he gave the participants a certificate of recognition from the Municipality.

The last three workshops were held in the CPI’s offices. They were work sessions on diction; drafting of captions for the photos taken in the Bosque de Piñones; design and production of a Facebook Live; creation of a Facebook page and preparing and producing a podcast.

“The first days of the workshops, I came just to be here, even though the workshops were interesting. When visiting the CPI came up, I was really motivated over doing the podcast,” said Luis Cartagena Báez, 17, when referring to the final work “Voz Gaming: La comunidad de gamers en Loíza.”

Cartagena Báez was so motivated that he wrote the script for the podcast that seeks to recognize the community of Loíza video game fans, in addition to expanding it. His peer Joseph O. Díaz Valentín oversaw the logo design, and Luis J. Fuentes Dávila shared his knowledge of basic video game concepts. The students of the Belén Blanco School in Zequeira had the mentorship of Nore Feliciano, media manager of the CPI.

Those attending the closing event at the MAC were able to listen to the podcast, because two computers were placed on a table also located in the museum’s inner courtyard, allowing the sound experience. Fourteen images taken by the group and one by photojournalist Doel Vázquez Pérez were part of the photo-essay exhibition “El Bosque de Piñones through Medioscopio.”

The photo exhibition invited the audience to tour part of the Piñones Forest that the Medioscopio participants had learned about through guided by the team from the Corporación Piñones se Integra.

Among the CPI journalists who offered the workshops were Rafael Díaz Torres, Vanessa Colón Almenas, José Encarnación, Damaris Suárez and Carla Minet, who had the support of Rígel Lugo, Amandla Colón, Nore Feliciano, Ricardo Rodríguez and Sharon Tossas. Communicator Anette Sofía Ruiz also facilitated one of the sessions. The workshops were coordinated by Laura Moscoso from the CPI, and Windy Cosme and Modesta Irizarry, from the MAC, as well as María del Pilar Carrillo and Mercedes Aponte, from ASPIRA, with the support of the Parcelas Suárez Community Board.

Vanessa Colón Almenas is a corps member of Report For America