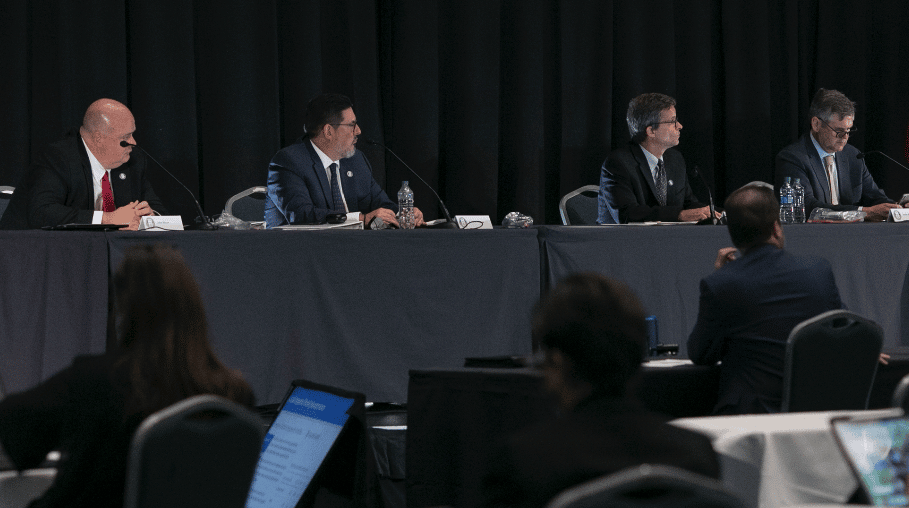 Public meeting of the Fiscal Control Board.

In a new attempt to prevent the disclosure of documents to the Center for Investigative Journalism (CPI, in Spanish), the Fiscal Control Board turned to the United States Supreme Court this Wednesday seeking the reversal of a recent decision by the U.S. Court of Appeals for the First Circuit that orders the delivery of the information.

“The decision, which holds that the Board has no immunity to a claim under territorial law seeking the disclosure of a broad array of internal and sensitive documents, will create grave difficulties for the Board in carrying out its statutory mission,” reads the petition filed by Proskauer Rose, the Board’s lead law firm.

The Board created under the federal law PROMESA argues that disclosing communications between officials of the government of Puerto Rico and the Board, among other documents, “will interfere with Puerto Rico’s recovery” and will prevent the making of “sensitive decisions,” over concerns about putting their discussions in writing and having them published.

As its main defense, the Board’s lawyers try to argue — unsuccessfully so far — that the entity enjoys “sovereign immunity” under the U.S. Constitution, so it is exempt and immune from claims under state laws. This includes claims under the right of access to public information recognized in the Puerto Rico Constitution, such as the lawsuit that the CPI filed against the Board in June 2017.

Over the past five years, the U.S. District Court for the District of Puerto Rico and the U.S. Court of Appeals for the First Circuit have rejected the Board’s arguments, deciding against it in this case.

“The CPI has requested crucial documents to understand the Board’s formation process, oversee the decisions it has made, and have details of its relationship with the government, which until now have been out of the public eye. The fact that they have gone to the U.S. Supreme Court is conclusive proof that there is information there that the people of Puerto Rico need and have the right to know,” said Judith Berkan, the CPI’s attorney.

In 2018, U.S. District Court Judge Jay García Gregory ordered the delivery of the requested documents, ruling that the Board — an entity created within the “territorial government” and financed with public funds from the local government — is subject to Puerto Rico’s constitutional right of access to public information. At that time, the fiscal entity delivered about 18,400 documents to the CPI, while claiming confidentiality on another 20,000. The communications delivered gave way to a series of reports published in 2018 titled “Puerto Rico Fiscal Board’s Emails”

Without any explanations, the Board stopped the delivery of documents and resorted to the Court of Appeals to prevent the disclosure of the pending information under the argument of “sovereign immunity.” On May 17, in a split decision, a panel of three judges from the U.S. Court of Appeals for the First Circuit in Boston ruled against the Board and confirmed Judge García Gregory’s decision.

Organizations in Puerto Rico and the United States supported the CPI as friends of the court. The list included the Puerto Rico Journalists Association, transparency nonprofit Espacios Abiertos, LatinoJustice and the Reporters Committee for Freedom of the Press, whose petition was joined by The Atlantic, CNN en Español, the McClatchy and Gannett networks, the Boston Globe, the Pulitzer Center on Crisis Reporting, the Society of Professional Journalists, and 20 other news groups.

The Board insists on its ‘sovereign immunity’

Berkan explained that sovereign immunity stems from the Eleventh Amendment of the U.S. Constitution, which protects state governments and agencies from lawsuits in federal court, if the claims arise under state law. The idea is that these lawsuits should be settled in the state courts, and not in the federal forum.

According to the Board, the courts have historically recognized that the government of Puerto Rico and its agencies have “sovereign immunity” under the U.S. Constitution, that is, they cannot be sued in federal court with claims arising under the laws of Puerto Rico.

Being an entity created “within the territorial government,” the Board argues that it enjoys the same sovereign immunity that is given to the government of Puerto Rico. It ensures that a federal law — in this case, PROMESA — does not abrogate, or limit, sovereign immunity, unless the intent to do so is “unequivocally clear” in the text of the law. As there is no such intention in PROMESA, the fiscal entity claims, the courts cannot limit or abrogate its sovereign immunity.

This is the legal controversy that the Board submitted to the consideration of the U.S. Supreme Court, which may or may not hear the case.

“In the context of Puerto Rico, first, it is not a sovereign state, and the PROMESA law also expressly says that we have to go to Federal Court to address these legal conflicts,” said Berkan, who along with Steven Lausell Recurt and the Inter-American University of Puerto Rico Law School’s Access to Information Clinic, represent the CPI in this lawsuit.

If the U.S. Supreme Court accepts the Board’s arguments, the effect would be that this entity would not have to respond in any forum: neither in federal court, because it would be immune as an agency of the government of Puerto Rico, nor in the local court, because PROMESA expressly prohibits it.