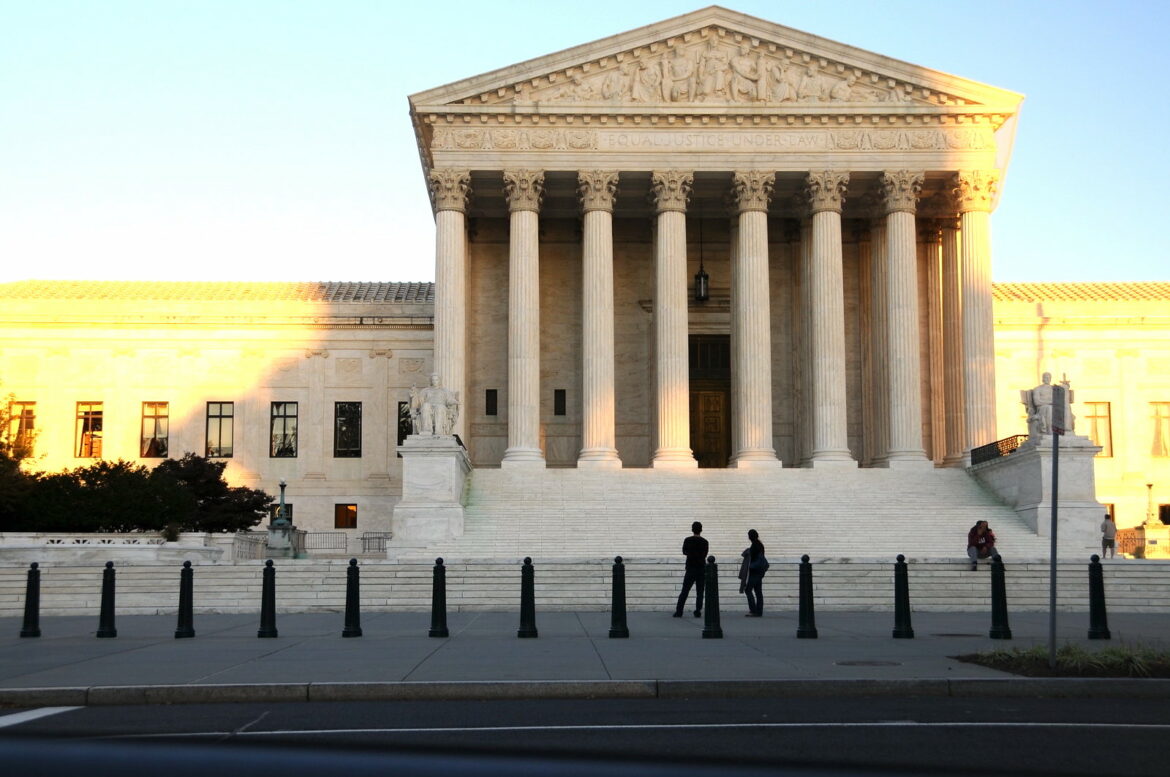 Photo by Serge-Melki via VisualHunt.

When the US Supreme Court (SCOTUS) evaluates on Wednesday, January 11, the case filed by the Center for Investigative Journalism (CPI, in Spanish) against the Fiscal Control Board to gain access to public information, it will review the arguments of more than 30 organizations and 19 law professors who expressed their support for the CPI before that forum via 10 briefs that they presented as friends of the court.

The Fiscal Control Board (JSF, in Spanish) alleges that, as an entity within the government of Puerto Rico, it enjoys “sovereign immunity” and does not have to submit to the right of access to information recognized under the Puerto Rico Constitution and deliver documents on its work, which the CPI requested. However, no forum has so far agreed with the Control Board and the SCOTUS has never decided that the territory of Puerto Rico has immunity like that of a state.

Among the organizations that appeared before the SCOTUS as friends of the court or amicus in support of the CPI are the Puerto Rico Journalists Association (ASPPRO, in Spanish); the Puerto Rico House of Representatives Speaker Rafael Hernández Montañez; the Reporters Committee for Freedom of the Press and 20 subscribing media organizations; the Institute for Energy Economics and Financial Analysis (IEEFA) together with CAMBIO PR, the  Comisión Ciudadana para la Auditoría Integral del Crédito Público, Sembrando Sentido and the Liga de Ciudades de Puerto Rico; GFR Media; LatinoJustice with the Hispanic Federation, and the Long Island Hispanic Bar Association; Espacios Abiertos; Public Citizen; and Clemente Properties.

“The CPI’s request for information has become an undivided claim in Puerto Rico, echoed by important institutions and people who reject the Board’s arrogant behavior here. Attempting to be above everything, so that no one can monitor them, is unacceptable,” said the director of the CPI, Carla Minet.

More than five years ago, the CPI sued the Board to gain access to several types of public information, including its communications with the governments of Puerto Rico and the United States. US District Court for Puerto Rico Judge Jay A. García Gregory ordered in favor of the CPI in 2018, deciding that as an agency of the Government of Puerto Rico, the Board is obliged to comply with the right of access to information under Puerto Rico’s Constitution.

Although the CPI received some of the documents requested, the legal process reached the point where the Board appealed to the United States Court of Appeals for the First Circuit in Boston to avoid turning over the missing communications without justifying why they were not delivered. In a two-to-one vote, that forum decided in favor of the CPI and against the Board. Not satisfied, the Board took its case before the SCOTUS, which accepted it, and whose oral hearing will be on Wednesday, January 11, 2023, at 9 a.m.

In its amicus, GFR Media states: “If this Court grants Petitioner’s request, the JSF (despite the fact that its members are territorial officers appointed by the president of the United States without the advice and consent of the US Senate) will now enjoy far more protection from press disclosure requests than the president himself. The New York Times, The Wall Street Journal, CNN, and Fox News could, arguably, request and obtain public records from President Joe Biden, Vice-President Kamala Harris, or Speaker Nancy Pelosi, but not from the FOMB. Clearly, Congress could not have intended for such an absurd outcome when it enacted PROMESA.”

The organizations that appear with IEEFA stressed in their brief additional consequences that may exist if it is accepted that the Board does not have to comply with the right of access to information, such as, for example, that the hundreds of documents and testimonies that they gathered in their million-dollar investigation, paid for with public funds, into the illegality of the debt could remain under wraps. “The JSF has garnered near total control over Puerto Rico’s elected officials and public agencies. To spare them from accountability, in the form of transparency and access to public information, would deal a great blow to the people of Puerto Rico who are only asking to know what these proconsuls are planning and how they justify it,” they emphasized.

“The Board’s immunity defense, if sustained, would seriously undercut the people’s sovereign right to know about the workings of their government. Because Puerto Rico’s people cannot hold Board members accountable at the ballot box, the press — and the disclosure laws on which it depends — serves as a key check on the Board’s power, as CPI has done through its important work spotlighting the Board’s spending on security details, and outside contractors, among other revelations. Barring public records litigation against the Board on immunity grounds would close this principal avenue of accountability,” says in its amicus the Reporters Committee for Freedom of the Press, whose petition was joined by journalistic organizations CNN en Español, Mother Jones, The McClatchy Company, The Center for Investigative Reporting, First Look Institute, Freedom of the Press Foundation, The News Leaders Association, Fundamedios, Institute for Nonprofit News, Inter American Press Association, National Freedom of Information Coalition, National Press Club Journalism Institute, National Press Photographers Association, Radio Television Digital News Association, Tully Center for Free Speech, Society of Environmental Journalists, Californians Aware, The Media Institute, Media Law Resource Center, News/Media Alliance.

The amicus signed by 19 active law professors from the University of Puerto Rico and the Inter-American University highlights the right of access to information that “it is as important today as it was when the Supreme Court of Puerto Rico recognized it in a moment of political repression and violence. Petitioner as an entity of the territorial government is bound by it today and Congress has not said otherwise.” “The Board, as an entity of the territorial government, cannot claim, in the name of sovereignty, a mightier immunity that overrules our democratic rights,” said professors José J. Álvarez González, Julio E. Fontanet Maldonado, Érika Fontánez Torres, Chloé S. Georas Santos, Michel J. Godreau Robles, María Hernández Torrales, Glenda Labadie Jackson, Hiram Meléndez Juarbe, Alvin Padilla-Babilonia, Luis M. Pellot Juliá, Yanira Reyes Gil, Mayté Rivera Rodríguez, Griselle M. Robles Ortiz, Iris Y. Rosario Nieves, Pedro Saadé Lloréns, Héctor R. Sánchez Fernández, Susana Serrano Mondesí, Patricia Otón Olivieri and Esther Vicente.

“ASPPRO members’ experience shows that the Board has been hermetic when answering questions from journalists and giving interviews, especially when questioned about their expenses or specific decisions. While the JSF does issue public statements and has a website to disclose information, it is far less forthcoming engaging with questions and requests from the press. As a result, stories are shelved or are published without reaction from the Board. In other cases, had the documents not been publicly available, the press would have not been able to confront Board members with the record. As a recent example, one Board member denied that they had discussed imposing a new charge on consumers during the negotiation of PREPA’s debt restructuring. Documents obtained by the press confirmed the charge was considered by the JSF,” said the organization that groups Puerto Rico’s journalists.

Meanwhile, the US-based consumer rights organization, Public Citizen, stated in its amicus that, “The Oversight Board’s arguments posit that, in enacting PROMESA, Congress, without ever saying so, intended to confer on an arm of the government of Puerto Rico sovereign immunity against claims seeking official records — immunity that Puerto Rico does not otherwise possess and that would set the Board apart from the great majority of government entities exercising executive authority in the federal, state, and territorial governments of the United States. To be sure, Congress has given the Oversight Board extraordinary powers to override decisions of the democratic institutions of Puerto Rico. But the extent of those powers does not suggest that Congress also sought to deny Puerto Ricans the ability to seek judicial redress when the Board attempts to shield its records from public scrutiny in violation of principles of Puerto Rico law that PROMESA does not preempt.”

The organization Espacios Abiertos mentions in its amicus that “The sovereignty of the people of Puerto Rico is vanquished, not vindicated, by extinguishing a right they created in their constitution to immunize a government they do not elect.”

Meanwhile, LatinoJustice states that: “The Board contends that it can withhold documents from the public for any reason, including to shield its inner workings from criticism. CPI’s work demonstrates the importance of reporting on precisely those communications that the Board seeks to hide from the public. Close relationships between the ‘independent’ Board and the federal government, and potential conflicts of interest of some of the Board’s closest advisors, provide strong reasons to scrutinize the Board’s decisions and question whether they are serving the interests of Puerto Ricans.”

Meanwhile, Puerto Rico House Speaker Rafael Hernández Montañez, as sole appearing party of the Government of Puerto Rico, said in his amicus that “The Oversight Board created by PROMESA is unlike any other entity that has ever claimed Eleventh Amendment immunity before this Honorable Court.” He adds that “None of the protections of the public treasury, federalism and dignity interests that inspire sovereign immunity are present in this case. The only reason why the Board seeks to resist the progression of the instant action is because it wishes to avoid the accountability that comes from the general public having access to government documents that are neither privileged nor exempted from disclosure.”

The US Government, through the Attorney General’s Office, submitted a brief and will participate in the argument on January 11. Its position is that the case should not be decided by the Supreme Court but returned to the District Court for a determination on how the right of access to information would apply to an entity with the Board’s characteristics. However, it suggests in its brief that the jurisprudence of the Puerto Rico Supreme Court and laws as recent as the Transparency and Expedited Procedure for Access to Public Information Act of 2019 support the conclusion that the Government of Puerto Rico has renounced its immunity on the issue of access to information, allowing citizens to sue it on this. This point, in fact, was already addressed by Judge García Gregory in 2018.

“The CPI recognizes and thanks everyone who stepped up to defend the right of access to information with their actions. We’re also fortunate to have an exceptional legal team led by Judith Berkan with the Williams & Connolly law firm, and the attorneys from the InterAmerican University Law School’s Access to Information Clinic, Steven Lausell Recurt and Luis José Torres Asencio, as well as Carlos Francisco Ramos, Equal Justice Works Scholar at the CPI,” said the co-founder of the CPI and coordinator of the organization’s Transparency Program, Oscar J. Serrano.