Repairs done by contractors of the Tu Hogar Renace program, implemented by the Puerto Rican Department of Housing after Hurricane María for emergency repairs jobs were so deficient that several nonprofit organizations in many cases had to redo the work, investing in that the money that should have gone to help other necessities, and more families.

At least a dozen organizations voiced their concerns to the Center for Investigative Journalism (CPI in Spanish) about how they had to invest more money in repairing, mainly, roof sealing work, which in many cases had to be removed and redone.

In the Miraflores sector in Orocovis, there were homes in which Tu Hogar Renace contractors “did not install roof anchors” or where they used “rotten wood that had to be changed,” said the Executive Director of nonprofit organization Matria Project, Amárilis Pagán-Jiménez. The residents of those homes could not remember the name of those contractors.

“Last year, part of what we had to do was follow-up on some of the repairs of Tu Hogar Renace and do them right,” Pagán-Jiménez said about the organization’s initiative that has succeeded in repairing 20 homes.

“When you have to redo a job, disassemble it and do it over, that is additional work ,” said Pagán-Jiménez to emphasize the duplication of expenses.

The co-founder of the nonprofit La Maraña, Sofía Unanue-Banuchi, spoke about a case in the Palomas Abajo neighborhood in Comerío, in which Tu Hogar Renace “repaired” the roof for a family in less than a week. “The roof was so badly done that [to redo it] you had to make an investment larger than the one initially contemplated,” she said.

The faulty installation of windows and zinc panels forced several of these organizations to invest money in materials and labor to repair what Tu Hogar Renace had done.

In the houses in which the Puerto Rico Institute for Socio-Economic and Housing Development (INDESOVI, in Spanish) has dismantled the poor work done by Tu Hogar Renace, they have found materials that “when you come to check [the houses,] you have to take it apart,” according to Executive Director Juan Sabathie-Quiñones. He said they had to replace them with new materials.

The President of the Sabana Grande Community and Economic Development Corporation, José Pietri-Martínez, also said they repaired some 20 homes in the southwest region of Puerto Rico, where Tu Hogar Renace did not properly install the roof panels. Although the nonprofit organization’s case managers sent letters of appeal to the program, “they never answered,” he said.

The repairs of Tu Hogar Renace amounted to $1.3 billion, an amount that the Federal Emergency Management Agency (FEMA) will have to reimburse to the Puerto Rico Department of Housing as part of the federal funds for recovery assigned after the passage of Hurricanes Irma and María.

At the end of May 2018, Housing Secretary Fernando Gil-Enseñat confirmed there were 3,884 complaints filed for deficiencies in the work and materials used by Tu Hogar Renace contractors.

“Of those, 6% were 5% were information inquiries and 4% in warranty claims. Of all these, 98% were concluded satisfactorily,” the agency claims.

According to the agency, only 2% of the complaints were not addressed because the claim did not proceed.

In Utuado, the director of the PathStone Housing Program, María Rodríguez-Collazo, shared the case of a house that had the roof sealed without the required previous cleaning. “What we have seen is that the product application was not done according to the manufacturer’s specifications.”

The finance director of the Ceiba Economic Development Corporation, Arelis Rodríguez, said that a woman’s home “continued to get wet” because the roof sealing work appeared to be “as if nothing had been done.” “I was very disappointed… I thought her problem had been resolved.”

For the three community organizations, redoing the work of roof sealing has amounted to “more than half of what a [new] roof seal would have cost.” This has caused some organizations, such as PathStone, to opt out of poor roof sealing repairs, since they lack sufficient funds to re do them.

“In our 49 municipalities, roof sealing is a problem and is one of the major structural repairs,” said Angel Cartagena-Rivera, supervisor of the San Juan region for nonprofit organization Endeavor. “We had to work hard looking for resources for roof sealing.”

The government admitted the program’s failure, but with no consequences

The issue of the thousands of complaints against the program was even discussed in the Telegram chat between Rosselló and his closest collaborators [a revelation that detonated a public outcry and caused his resignation].

When former Chief of Staff Ricardo Llerandi commented in the chat on the issue of the island’s recovery, communications advisor Carlos Bermúdez, warn how “negative the execution of Tu Hogar Renace has been.” Therefore, he recommended that someone should work on countering the issue of recovery, but “without mentioning Tu Hogar Renace.” 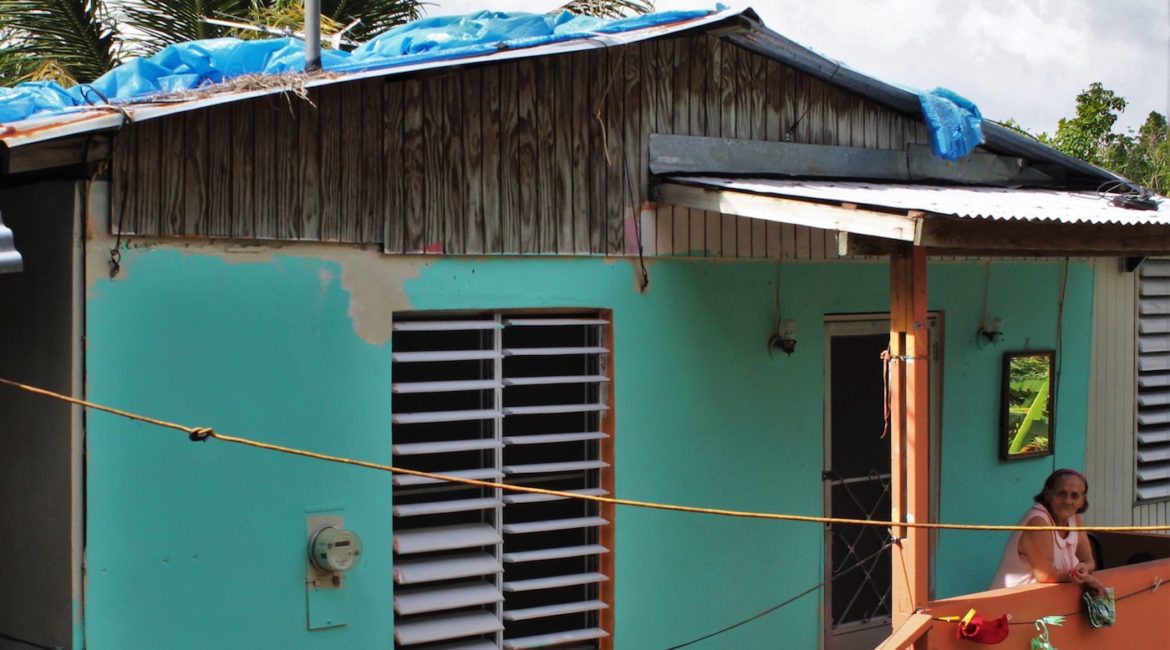 María Ramos Nieves, 68, is a resident of the Piletas neighborhood in Lares. Her home is still covered by a blue tarp almost two years after hurricanes Irma and María.

Omar Marrero, former director of the Central Office of Recovery, Reconstruction and Resiliency, known as COR3, disagreed about Tu Hogar Renace being a fiasco.

“To say that Tu Hogar Renace was a failure is to forget that 108,000 Puerto Rican families had their homes repaired. That it was a temporary repair, OK with that, that in some cases mistakes were made, OK with that. But when you look at a $1.2 billion program, it is the largest STEP program in the history of the US , in the history of recovery. We had never seen such a program,” said Marrero.

However, he acknowledged that the initiative was not enough, so the people who originally benefited from it will have priority in the Housing Reconstruction, Repair and Relocation (R3) new program that began last June 30 with a  $2.1 billion assignment from the U.S. Department of Housing Community Development Block Grant – Disaster Recovery (CDBG–DR) Program.

For the R3 program the Housing Department determined that the maximum amount for home repair is $60,000 per structure and $150,000 for the reconstruction or relocation of homes.

People still living in houses covered with blue tarps will be given priority , said Gil-Enseñat; as will those 65 or older and those with disabilities. There are currently about 20,000 families living under blue tarps, according to the Housing Secretary.

Those who did not qualify for initial FEMA assistance can now apply for the R3 program.

Among the documents required to qualify for this program is proof that the structure is the primary home, and evidence of ownership and income. Although the program will cover the 78 municipalities, only 48 mayors signed an agreement with Housing to convey to residents the information related to the program so they can submit their requests through service centers, mobile applications, call centers and an internet page.

Ariadna Godreau, executive director of the NGO Ayuda Legal , warned that although an audit of the Office of the Inspector General of the Department of Homeland Security found no merit in any of the people’s allegations, “no one, not even mayors, can validate Tu Hogar Renace as successful. On the contrary, it was a $1.2 billion waste.”

The CPI learned that complaints about the program reached the Office of the Comptroller, who instead of conducting an audit, did a monitoring exercise, which has not been made public.

“It was not an official audit, since the sample was not scientific, as required by the Generally Accepted Government Auditing Standards (GAGAS). That’s why we have not made it public, because it was not an audit, it was a monitoring to learn about and review citizen’s complaints,” said Comptroller Yesmín Valdivieso.

“Most of the problems identified were caused by the lack of supervision of subcontractors who were doing work to comply with the number of homes and schedule , even when the conditions were not adequate to perform the work. For example, roofs fixed under the rain and new cabinets installed in kitchens without a roof,” she added.

After repeatedly requesting the monitoring to find out the findings and recommended corrective actions, Valdivieso said the results are used as a guide, “but we do not have a final document to offer ; and I won’t give it to anyone.”

However, the Comptroller said something different last April 22 to El Nuevo Día. She told the paper they visited 1,000 houses throughout the island and, after the assessment, her office passed the results to the Department of Housing and Rosselló-Nevares, according to the newspaper.

The CPI reiterated the request for the complete monitoring, as it is a public document. There was no response at press time.

The special funds created by different foundations within weeks after hurricanes Irma and María to cover both necessities and urgent repairs, began to close after the emergency period.

The director of the PathStone housing program explained that the announcement of the R3 Program has drawn private donors to stop their contributions to community-based organizations, because of the perception that they will receive federal funds from the government to continue housing rehabilitation.

Meanwhile, the Executive Director of nonprofit organization Ponce Neighborhood Housing, Elizabeth Colón-Rivera, explained that another factor that could have affected the decline in the influx of private funds for home repairs is that organizations spent part of the money available on food and medications.

She reckon she feared the funds to continue with home repairs would be less . “Everybody is concerned.” “We have more than 30 families (…) [who] are still living under blue tarps and are still living in insecure conditions (in that neighborhood in Ponce).”

Vélez-Soto, of Sol es Vida , concurred: “As we pull farther away from the Hurricane, there are fewer places to apply for reconstruction, because large foundations go back to normal after the momentary boom in reconstruction funds.”

The money, “not really evident”

For Sabathie-Quiñones, executive director of INDESOVI, the influx of federal recovery funds has been slow. After having worked as a supervisor of recovery projects in 2002 following Hurricane Georges, he said this time, “although there has been much talk about money, it’s not evident.”

La Maraña, a private organization, has collaborated in community efforts in Comerío to repair houses around the neighborhood.

While it is true that the nonprofit organization is working with eight housing projects in Mayagüez, Coamo, Salinas, Dorado, Yabucoa, Loíza, San Juan and Vega Baja, he stressed that only five of the municipalities have exempted them from paying municipal construction taxes.

Although prior to Hurricane María INDESOVI received federal funds for the construction of social interest housing, Sabathie-Quiñones said that during the recovery process they have mostly depended on donations from foundations.

The director of the Pathstone Housing Program also questioned how the recovery money has been used. “There’s no other way to call it other than (it) being extremely slow,” Rodríguez-Collazo said, referring to the arrival of federal funds to the island.

The president of the Sabana Grande Corporation for Community and Economic Development, Pietri-Martínez, said “a nonprofit institution like ours would have already fixed all the houses with the money they gave to Tu Hogar Renace.”

The community-based organizations interviewed by the CPI agreed they are “afraid ” of being forced to stop home repairs almost two years after Hurricanes Irma and María, due to a lack of funds.

Formalizing Community Aqueducts is a Discouraging Process in Puerto Rico