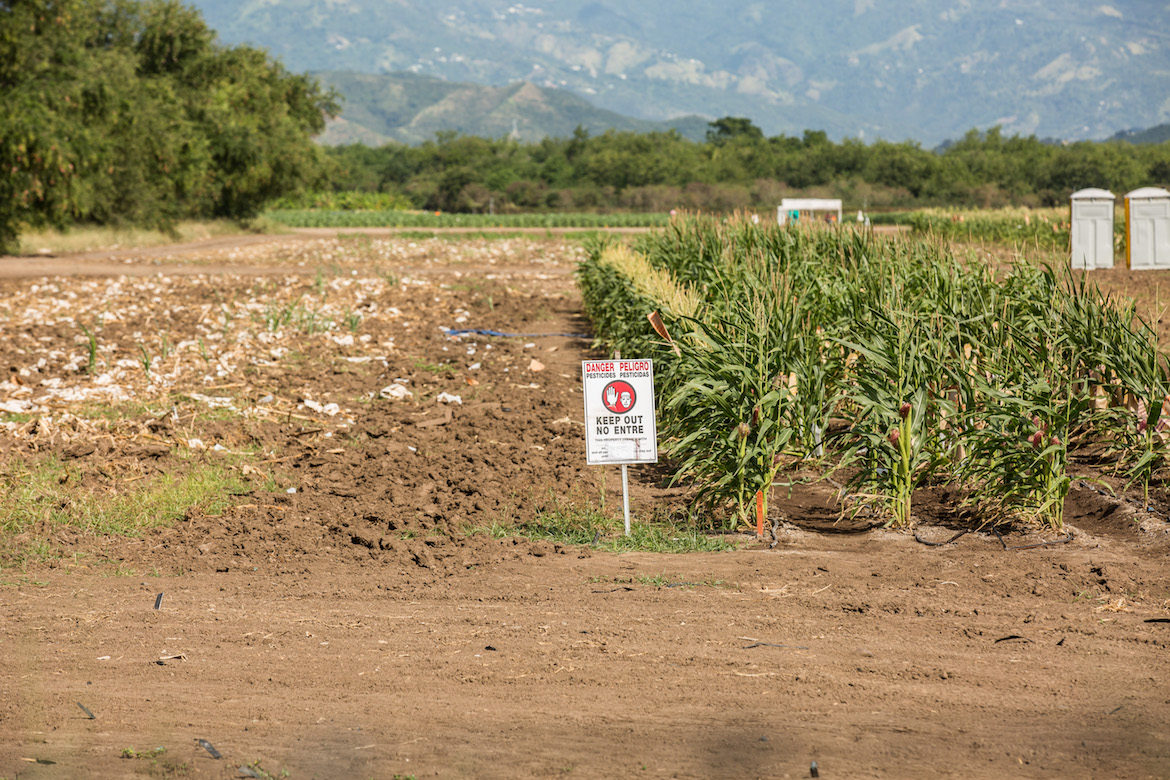 Amelia Farm, property of the Land Authority, rented by Monsanto in Juana Díaz.

No one asked Juana Díaz’s residents, not even the Mayor Ramón Hernández, whether the multinational seed companies could take over one third of its best farming land, turn them into a genetically modified seeds lab and receive tax exemptions at the expense of lessening the town’s coffers. “A hot dog cart pays more municipal taxes than Monsanto, that makes millions,” Hernández complained. 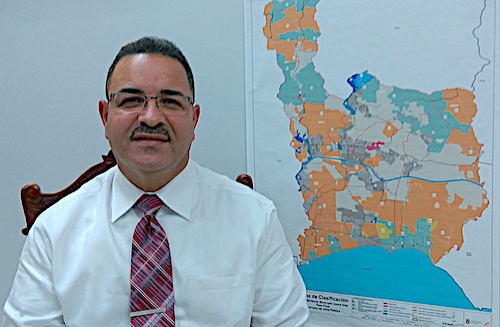 Across the town square, the Pepe´s store that sells purses, scarves and dresses paid $2,421 in municipal taxes during fiscal year 2017. That is more than the amount paid by Monsanto, which only contributed $1,826 although it reported $22.6 million in sales volume just in Juana Díaz, according to City Hall. The company is in the Fortune magazine 500 list of the world’s richest corporations. If the Government had not granted special tax rates, it would have paid almost half a million dollars to the City over five years, just like any business with a similar sales volume has to.

During Puerto Rico’s decade of fiscal crisis, when the Island became the top experimental center for genetically engineered seeds, the Government gave away to these seed multinationals over $526 million. These benefits include Juana Díaz´s tax discounts and farm irrigation at reduced costs, as well as preferential income tax rates, exemptions, industrial incentives, salary subsidies and free water from the the Island´s south aquifers. This was exposed by the Puerto Rico Investigative Journalism Center (CPI) after a request and review of reports from the Puerto Rico Treasury Department, the Agricultural Enterprises Development Administration, the Puerto Rico Industrial Development Company and the Natural Resources and Environmental Department. The quantity does not include the fiscal cost for local tax in all the municipalities that host corporations such as Illinois Crop Improvement Association, Syngenta Seeds, Dow AgroSciences, Bayer CropScience, Dupont-Pioneer, AgReliant Genetics, Mycogen Seeds and Rice Tec. 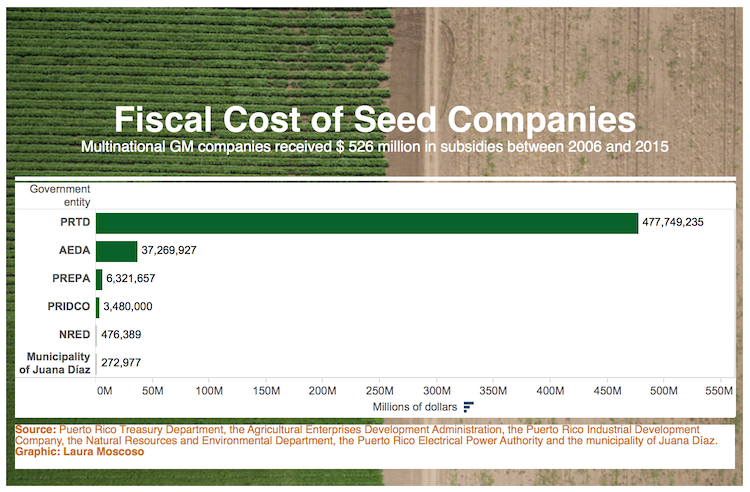 Was it worth giving these incentives? Were more contributions paid to Puerto Rico in return? The Government gave these companies 16 times more than they contributed to the Island.

The biotechnology multinationals benefiting from these tax exemptions for bona fide farmers only paid back to Puerto Rico $413,828 in taxes between 2005 and 2014, according to the Treasury Department’s latest data. Among these seedbeds is 3rd Millenium Genetics, which differs from the others because is the only one founded in Puerto Rico and also assisted the seed processing for a government project for rice harvesting.

A group of seed companies unidentified by the Puerto Rico Treasury benefited from special taxes of laws 135 of 1997 and 73 of 2008, for which they paid about $31.4 million during that period. These laws were more effective than the bona fide farmers tax exemptions in bringing back money for the Government, acknowledged Edwin Ríos, deputy secretary for Economic and Financial Affairs for the Treasury Department.

The seven corporations members of the Puerto Rico Agricultural Biotechnology Industry Association (PRABIA) created 3,385 direct jobs during the past fiscal year, according to Beatriz Carrión, the organization’s executive director. Nevertheless, the seed companies received over $37.2 million during the crisis from the Agricultural Enterprises Development Administration to subsidize its employees´salaries. The Government agency refunds $2.72 per work hour paid by the companies to its unskilled laborers. 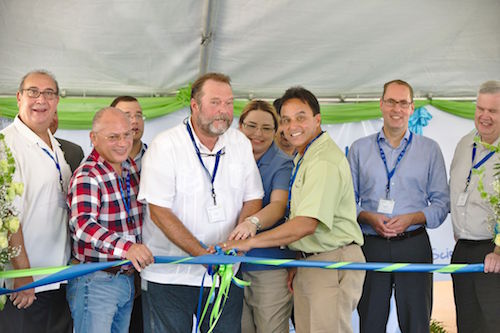 Frank Terhorst on the right, wearing a blue shirt.

Frank Terhorst, Global Head of Seeds at at Bayer Crop Science, asserted the multinational operations as an opportunity to bring knowledge to Puerto Rico about the agricultural business management. “Not only do we create work and investment, but we assist the community to develop their skills for the local production,” he said in September 2016, after the inauguration of the multinational facilities in the Guánica and Sabana Grande towns, where he proclaimed the creation of over 25 jobs. “I see a winning situation for both sides when he bring the most advanced technology. There is a learning opportunity. I believe that the Puerto Rico agriculture will benefit from this,” he said.

The agricultural biotechnology sector invested $96 million in its business in Puerto Rico during fiscal year 2015, according to a survey by the Puerto Rico Statistics Institute, which demonstrates the industry stability amidst the crisis. Syngenta Seeds company kicked off 2017 with a $6 million investment to improve its facilities in Salinas and Juana Díaz.

The Agriculture Department has not done a study to assess the benefits of those investments against the costs of the seed multinationals in a country that rolled down the cliff of a fiscal crisis and crashed against its default to the bondholders and retirees.

The Fiscal Oversight Board, imposed by the United States so that Puerto Rico pays its debt, is ordering the Island’s Government to adopt austerity measures. The Commonwealth does not have money to afford its public health plan to provide to about 1.4 million residents. The largest massive exodus toward the mainland metropoli since the Great Depression swells. The University of Puerto Rico -the public university system, comprised of 11 campuses- faces the prospect of $300 million cut from its budget. The Puerto Rico Treasury Department paid the taxpayers their refunds late during two consecutive years.

Puerto Rico governor Ricardo Rosselló, said during his recent address to the Commonwealth lawmakers that he will revise outdated incentives which do not account for a return on investment. However, he declined to a request for an interview with the CPI to discuss the corporate economic shelter provided to these multinationals.

Even the Puerto Rico Electrical Power Authority (PREPA), a public corporation which also has been unable to meet payments to its bond holders and has recently increased its consumer rates to raise the money it lacks, offers preferential rates to seven seed companies. PREPA is responsible for providing water to the old farming irrigation canals and charges $2 per acre-feet (325,900 gallons) to these companies, while it bills the rest of the industrial customers between $163 and $325 for the same volume. The fiscal cost for this subsidy for the seed multinationals was more than $6.3 million between 2006 and 2015, according to data provided by PREPA.

Bona fide, good faith. The Latin term refers to a legal principle which recognizes the honesty and veracity of subject matter. The Agriculture Department, which certifies companies as bona fide farmers so they can claim exemptions, sent the Monsanto and Illinois Crop Improvement Association certifications to Juana Díaz. Mayor Ramón Hernández had requested them in 2016, questioning if they met the criteria to obtain that privilege. In the City Hall meeting room, Hernández layed over a table copy of the Puerto Rico Agricultural Incentives Law which provides this incentive to those who work the land. Article 2-A-(b), which was highlighted in yellow, states that the bona fide are those who have sown, harvested and sold the agricultural product. Article 3 (b) (1) states that the incentivized business is for the production of food for humans and animals, something not done by the seed companies, which export the GMO´s for further development outside of Puerto Rico. There is also a Puerto Rico Justice Department legal opinion that establishes that these companies do not engage in agriculture because they carry out research and development. Since they are not farmers, the Government allows them have control over more than the constitutional limit of 500 acres of land.

The Mayor condemned that, by controlling a large part of the farming land, the seedbeds limit the Juana Díaz capacity to have a local economy based on tomatoes, onions, mangos, green bananas or any other food. “In case of an emergency, what are we going to eat?”

The goal of offering benefits to foreign companies is to create a competitive advantage; attract investment to a non-existent industry that otherwise may stay in foreign locations which offer better conditions to the business sector. The Puerto Rico Agricultural Biotechnology Industry Association claims those incentives are important to guarantee the retention of the corporations it represents. But Puerto Rico already has the great competitive edge, attractive for any seed corporation, regardless of the incentives: a year round average temperature of 27 °C (80 °F) in the southern part of the Island, which allows for up to four harvest per year of corn and soy, when they can only have two in the Continental United States.

“The incentives are just the gravy,” said Ed Baumgartner, whose resumé boasts 21 years of experience in Dow AgroSciences and the creation of 3rd Millennium Genetics company in Santa Isabel. “The seed companies really come for the heat index, which is the most important. It allows us to harvest corn in 90 days, faster than in Hawaii, where it takes about 100, and then in the Continental United States, where it takes about 150 days. I takes the seed companies about ten years to develop a new product. Puerto Rico allows them to cut the research process in half.”

Nowhere in other state or territory of the United States, the most liberal country in regards to GMO’s and agrochemicals associated with those crops, can the natural competitive advantage Puerto Rico has to offer be found. Besides, seed shipment to North America are faster and least expensive than Hawaii, the main competition for Puerto Rico in GMO´s experiments. Indeed eight foreign seed companies had already established in Puerto Rico between 1983 and 2003, before the approval of the Agricultural Biotechnology Company Promotion and Development Act of 2009. Said law establishes a policy to put the greatest amount of incentives into this multinationals so that Puerto Rico “can become a Mecca for the development and settlement of the knowledge industry in the branch of agriculture,” as it states in its text. The law does not require any accountability nor audit for the companies. One of the law authors was representative Carlos “Johnny” Méndez, current president of the House of Representatives, and it was signed by senator Thomas Rivera-Schatz, current president of the Puerto Rico Senate, when he held the same position in 2009.

“Why then put out a multimillion incentives red carpet if already the companies would have come anyway? Why give the house away beforehand?,” challenged Deepak Lamba-Nieves, director for research for the Center for a New Economy, and independent organization which researches and analizes public policy issues on the Island. “The corporate rationale is that Puerto Rico has to do everything in its power to protect those jobs. That is a hostage rationale. If we are anchoring the economic model on companies which threaten us with leaving on the smallest provocation, well, that is not a context to emerge from the crisis. The exemptions and incentives are important to compete with other countries, but is a mechanism within an economic development plan, and, in Puerto Rico, the incentives have become the rule rather than the exception.”

Agricultural economist Parimal Choudhury, a retired University of Puerto Rico professor who has been a consultant during 50 years on farming matters in the Island, believes is not good business that the public funded incentivized experiments wont solve the problems with Puerto Rican crops, that the companies use the best lands for experiments instead of producing food and that they return less to the treasury than what they receive. “When 80% of the food of Puerto Ricans comes from outside the Island, we have a problem. We have always granted subsidies, but they are not focused in promoting production nor in results.”

Mayor Ramón Hernández considers these incentives a “jaibería”, a Puerto Rican slang derived from jaiba or crabs, without a direct translation to English, which refers to someone who takes advantage of someone or some circumstance. “We are not against any company, but it’s unfair that they pay so little. The municipalities don´t participate when the Commonwealth Government grants them these decrees”, he added. He was referring to preferential tax deals which affects the capacity to allocate municipal funds and don´t create local revenue. And he calls for the Agriculture Department to assess the quality of the jobs created by these companies, which in the most cases are temporary. “The seedbeds money doesn’t stay here, it goes to the head office outside Puerto Rico. It’s impossible to move Puerto Rico forward this way.”