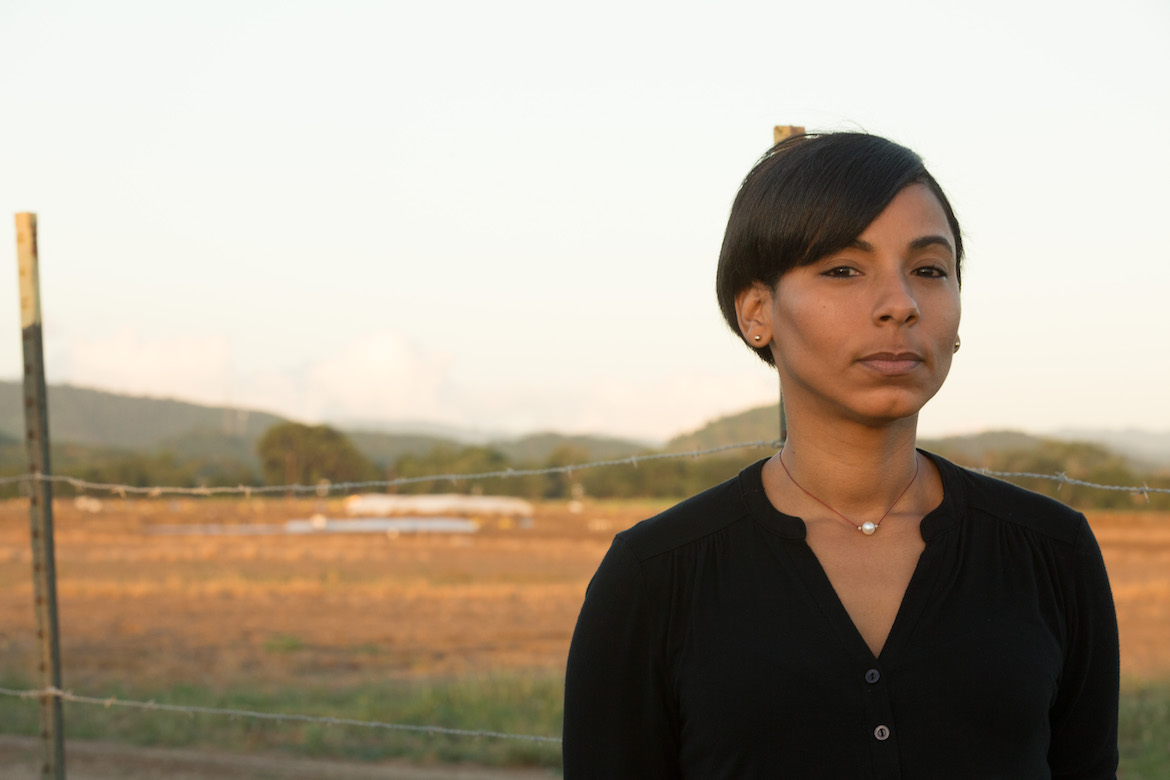 Agronomist Iris Pellot worked in Monsanto testing a herbicide whose use was not approved in the United States and its territories.

After suffering a severe allergy and respiratory problems while working in Puerto Rico with experimental agrochemicals for the multinational seed producer Monsanto, agronomist Iris Pellot sued the company for allegedly causing her “intentional and negligent” harm, as well as violating her constitutional rights. The first day in court was on Friday, Jan. 24.

Sitting on one of the benches in room 601 at the Aguadilla Superior Court, Pellot hugged two of her children while she cried. She was telling them she was nervous because of the hearing that was about to start before Judge Miguel Trabal-Cuevas. Monsanto’s lawyers and the two supervisors named as defendants (Eric Torres, former company operations manager, and Oscar Sparks, who led the experiments from the multinational’s Missouri headquarters) had filed a motion for the judge to dismiss the lawsuit.

Monsanto’s lawyers argued during the hearing that the lawsuit is unfounded because the seed producer and the supervisors are covered by absolute employer immunity, since they were insured by Puerto Rico State Insurance Fund Corporation. This government entity, which treats workers who suffer accidents in the workplace, provided treatments and compensation to the plaintiff between 2012 and 2019.

Pellot’s Attorney, Judith Berkan, explained in court that the immunity granted by Law 45 to insured employers have certain exceptions, such as when there is an intention to commit acts that may harm their employees, according to Puerto Rico Supreme Court jurisprudence established in cases like Segarra Hernández vs. Royal Bank.

Berkan explained that, in this case, that intention was revealed when her client was exposed to working with chemical products with formulations that were unauthorized for use in the United States and its territories.

“This is an unusual case, unheard of,” Berkan said. “Monsanto exposed a pregnant woman to these experiments. She asked for the necessary equipment to protect herself from an unauthorized product and they didn’t provide it,” she added. Pellot and her 20, 11, and 10 year-old children are seeking around $3.5 million in physical and moral damages.

When the agronomist, who graduated from the University of Puerto Rico in Mayagüez, was carrying her third child, her employer ordered her to work on the special project. She had to test genetically modified corn and its resistance to herbicides.

The seeds were developed at the multinational’s Missouri headquarters, which paid Monsanto Caribe to experiment on land rented from the University of Puerto Rico’s Agricultural Experimental Station in the northwestern town of Isabela. In 2010, Pellot began to feel the first symptoms that resulted in anaphylactic shock (very severe allergy) and bronchial asthma.

The Center for Investigative Journalism exposed some of these problems in 2017, in its “Transgenic Paradise” series. This investigation found that Puerto Rico is the jurisdiction that does the most experiments with genetically modified seeds in the United States and its territories.

The main goal of these tests, which are largely carried out on the island’s most productive lands, is to make herbicide-resistant plants. The companies that conduct these experiments received more subsidies than the taxes they paid in Puerto Rico to a government going through its worst fiscal crisis.

Berkan submitted a motion asking the judge to deny the request for dismissal and for Monsanto to answer the questions listed in the lawsuit. To revoke employer immunity, the plaintiff must make specific accusations that illustrate the alleged direct intentional harm to Pellot, a claim not included in the lawsuit documents, according to Monsanto’s lawyers.

When Pellot’s attorney asked for discovery of evidence without having those specific accusations, the plaintiffs are on a “fishing expedition to see if they have a case,” said Attorney Albeniz Couret-Fuentes, of the Sepulvado, Maldonado and Couret law firm, which defends Monsanto Company.

Monsanto has provided more than 3,000 pages in response to requests for information from the plaintiffs, but they have not disclosed the chemical formulations that allegedly caused harm to her client, Berkan said.

During her experiments with the multinational, Pellot saw some documents related to the special project she was working on that established that the active ingredient in one of the herbicides she used was Haloxyfob R-methyl. This ingredient has been shown to cause chronic toxicity in the reproductive systems of rats and abnormalities in the development of their fetuses, according to a scientific article published in 1995 by the EXTOXNET website, a pesticide information network in which participate universities such as Cornell University, Michigan State University, Oregon State University and University of California at Davis.

Pellot’s lawsuit questions legal protections for immunity and employer protection against alleged intentional acts to violate the law. The case is different from that of tens of thousands of people in the United States who have sued Monsanto, now Bayer, for the assumptions that its star herbicide marketed under the Roundup brand is carcinogenic.

Judge Trabal-Cuevas said that if he moves forward with the trial, it would be a highly technical case. He required the parties to have translators available if they’re going to use experts who don’t speak Spanish.

The judge must decide — although there’s no time limit at this stage of the process — if he will accept Monsanto’s petition for summary judgment to reject the agronomist and her children’s claims, or if he orders the company to respond to Pellot’s allegations.