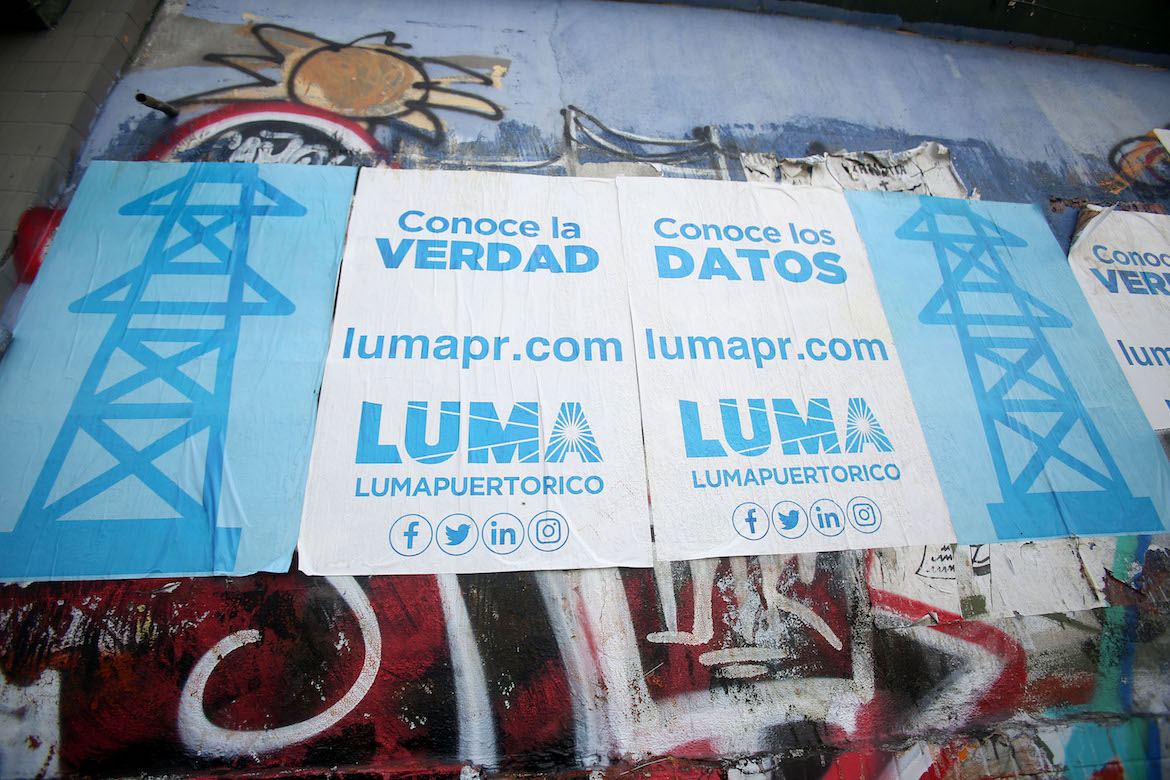 LUMA ads in front of the headquarters of the Electric Power Authority in Santurce, Puerto Rico.

Hiring a law firm that charges up to $1,245 per hour. The outsourcing of foreign companies such as Alumbra, from Colorado, which has billed as much as $1.3 million in a single month for plans to transform the energy system without having gone through a competitive process. This is how the first six invoices that LUMA has already submitted to Puerto Rico Electric Power Authority (PREPA) look. Luma is the firm that will manage the transmission and distribution network in Puerto Rico starting in June,

The public corporation does not have the opportunity of reviewing the invoices in a transparent way, Robert Poe, a member of PREPA’s Governing Board said at a meeting on December 16, 2020. His criticism came up because so far, the Public-Private Partnership Authority (AAPP, in Spanish), which oversees the contract with LUMA, has not allowed PREPA to conduct a full review of all of the documents to make sure the expenses are justified.

Engineer Tomás Torres, the consumer representative before the Governing Board, made similar statements. He said that, in addition to its monthly flat rate of $5 million, LUMA charges an average of $7.8 million in reimbursable expenses each month, excluding the original record of hours worked, purchase receipts and other information needed for its evaluation.

The hiring of the Canadian-American consortium LUMA is the result of a privatization process that began during former Gov. Ricardo Rosselló’s administration, after Hurricane María destroyed the electric power grid and following the bankrupt public corporation’s history of administrative failure.

LUMA’s Chief Executive Officer Wayne Stensby, and AAPP Executive Director Fermín Fontanés, have told the Center for Investigative Journalism (CPI, in Spanish) that the public-private partnership (P3) will result in savings by overseeing the electricity system, and that it will generate business opportunities for local companies, so that they will also benefit from the economic activity related to the transformation and recovery. But this has not happened in the first six months since the agreement got underway, as the invoices show.

Of the 20 companies that have invoiced LUMA during this period, only one is from Puerto Rico — insurance brokerage firm Vidal & Rodríguez, according to an analysis done by the CPI.

In September, when LUMA submitted invoices for the largest amount of reimbursable expenses (more than $5 million), local companies were contracted mainly for services that resulted in low billing compared to foreign ones. For example, the highest invoices from local companies were those from Triple-S insurance company, for $26,000, and from human resources consultancy firm, BMA Group for $21,538.

“In this initial stage, LUMA is coming to Puerto Rico to start up its operation. That’s why you’re seeing companies from the United States that are working with them,” Fontanés said. He stated that when the transition is complete and the P3 begins to manage the grid in June, that’s when local companies will be hired. “LUMA isn’t going to take the money and do it all,” he said.

In addition to the low participation so far by local companies, there are the high costs of consulting and legal services. Francisco Cerezo, a partner of multinational firm DLA Piper, which has provided legal and administrative representation to LUMA, submitted an invoice for $47,475 for 45 hours of service last September: $1,055 per hour. Hariett Lipkin, a partner of the same company, billed $9,043 for 7.3 hours of work (less than a full workday), charging between $1,200 and $1,245 an hour. This fee “seems gigantic but it’s normal,” since that is “what this type of firm charges,” Fontanés added.

However, this number is much more than what the partners of Proskauer Rose charge ($789 an hour). Proskauer Rose is the US law firm hired by the Fiscal Control Board to lead bankruptcy cases in Puerto Rico.

No proof of savings so far
In the breakdowns of costs and reimbursable expenses for the first six months of the company’s services, Alumbra LLC appears as the subcontractor that has billed the most to LUMA. A professional engineering services company headquartered in Denver, Colorado, and registered to do business in Puerto Rico in August 2020, Alumbra has billed $4.7 million between July and December 2020 for developing infrastructure, technology, management of vegetation, customer service and management transition plans.

“So far there’s no accountability for LUMA’s savings,” said Cathy Kunkel, an analyst at the Institute for Energy Economics & Financial Analysis (IEEFA), which since 2015 has studied and published reports on PREPA’s bankruptcy and electricity system. “It’s an area of concern if LUMA is still going to be relying on a lot of outside short-term contracts without institutional memory of Puerto Rico.”

The company’s arrival happens when PREPA is looking for a way to get out of an accrued debt of almost $18 billion in bonds, pensions, fuel purchases, accounts payable, among others, and whose restructuring process is in a kind of indefinite limbo.

The CPI asked Fontanés why there is no open competitive process prior to awarding LUMA service subcontracts — an issue that came up at the PREPA Governing Board meeting in December. “They [LUMA] are bringing in the people they believe to be the best,” Fontanés said. “It’s the vision they sold us of how they were going to do it … We have to trust their expertise,” he said.

There are expenses charged by the same companies that make up the LUMA consortium, such as Canadian firm ATCO and Texan company Quanta, for executive transfers, plane tickets and hotels, among others.

Robert Poe, a member of PREPA’s Governing Board since Rosselló appointed him in 2018, said that there is a bureaucracy created by AAPP consultants that handle the invoices, that “has made it virtually impossible for us to look at that variable billing”.  “Which is crazy because we are required under laws 120 and 7 to be able to audit things to meet our financial needs. So, we received from the consultancy of P3 an egregious suggestion that we get permission from consultancy two days in advance. We can’t take pictures, we can’t make copies,” Poe said.

He also said LUMA has been requesting contracts to buy printers and customer service applications that are invoiced as PREPA expenses and submitted for signing by its executive director, Efrán Paredes. Poe said he is against these types of expenses that don’t follow a procurement process that PREPA has to comply with, so they will ask for a waiver from the Fiscal Control Board. Poe said this move is essential to avoid a “bayonet” from the Fiscal Control Board, which since 2018 has been demanding an open procurement process  at the public corporation.

The Puerto Rico House of Representatives and the Senate submitted resolutions to investigate the consortium in early January, and Gov. Pedro Pierluisi created a government committee to analyze the  contract with the intention of amending it, if necessary. The first meeting will be on February 4, when the work plan will be established, a spokeswoman for La Fortaleza said.

On January 27, Pierluisi met with Ángel Figueroa Jaramillo, president of the Electric Industry Workers Union (UTIER, in Spanish) and its legal representative, Attorney Rolando Emmanuelli, who reiterated their request for the deal to be canceled.

LUMA said in a statement that the contract is final, binding and enforceable by the parties, after its approval from PREPA’s Governing Board and the Fiscal Control Board, the Puerto Rico Energy Bureau (the energy system’s regulatory entity) and former Puerto Rico Gov. Wanda Vázquez.

One thought on “LUMA Attorneys Charge More Than $1,000 an Hour and Consultants Get Paid Nearly $5M to Write Plans”