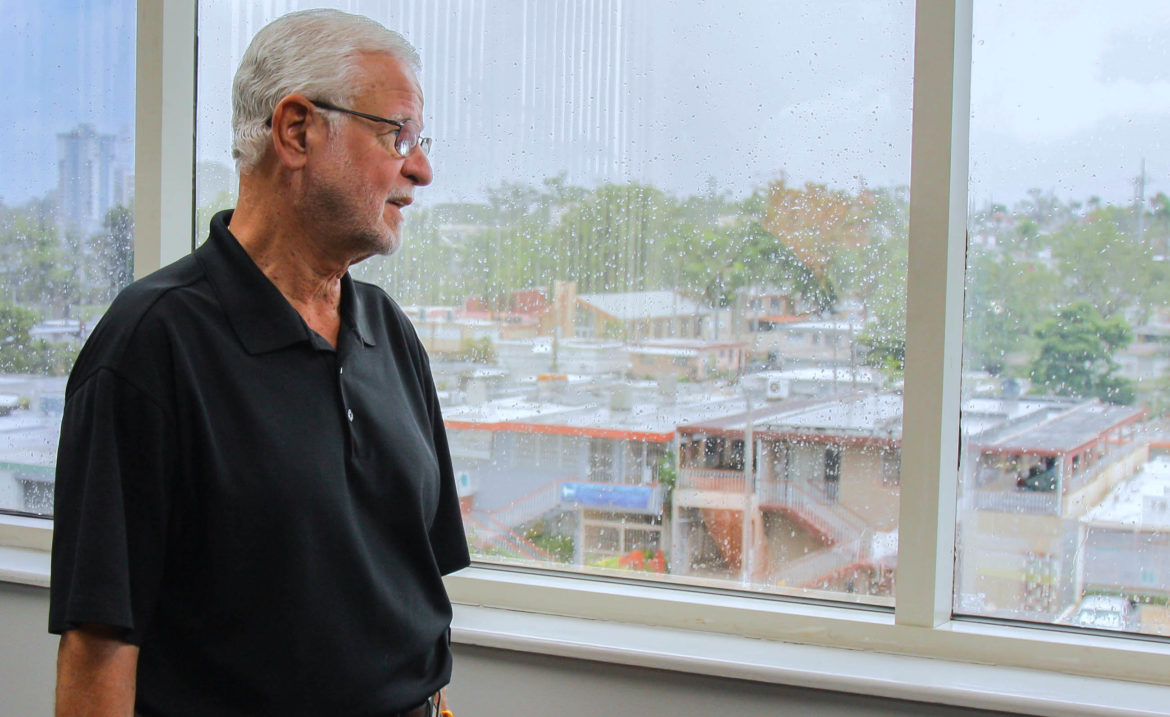 Hector Pesquera, Secretary of the Department of Public Safety

A young man paced back and forth at an intersection in one of San Juan’s public housing complexes, Nemesio Canales. Suddenly, his head sprung up and a loud whistle echoed across the block, over the sound of roosters crowing.

“That’s the sound the lookouts make when they see cops,” said Lt. Ferdinand Acosta of the Bureau in San Juan. Drug smuggling has normalized lookouts in public housing projects in San Juan.


The situation in Nemesio Canales was so violent in the 90s they had guard shackles installed at its entrance. Although in the last couple of decades it has seen a decrease in criminality, many other neighborhoods in Puerto Rico’s capital and other areas around the island have recently been the backdrop for innumerable homicides.

The first four months of 2018 in Puerto Rico, as of April 29, have seen 227 murders, 14 more compared to the same period last year, and of these, more than 90 are related to drug violence. But those who would fight crime are leaving the force.  In just five years Puerto Rico lost nearly a quarter of its police force. Out of those 17,000 officers, more than 4,000 have left their jobs. Many officers who have stayed on the force are unhappy with what they say are low salaries and meager benefits.

Meanwhile, crime is spiking on the storm battered island.

“We do have a problem with drugs, nearly 50 percent of the murders in Puerto Rico are drug related,” said Lt.  Acosta.

On the 8th of April three men were gunned down in Manatí, a town 24 miles west of San Juan. One of them, Manuel Pizarro, was on federal probation in Florida and had been in Puerto Rico for eight months since getting out of jail.

“The area of the incident is a known drug point, and from what we know in the investigation we think Pizarro came to reclaim his territory,” explained Lt.  Acosta. “That incited into a drug war, with the result of him being killed with two other guys.”

“It’s an indicator of the increase in violence in the country,” said Lina M. Torres Rivera, criminologist and professor at Sagrado Corazón University. “The trend has been an increase in murders in metropolitan areas such as San Juan, followed by Caguas and the southern area of Ponce.”

According to the Secretary of Puerto Rico’s Department of Public Safety (DPS), it’s difficult to prevent these types of murders and a higher police presence on the streets wouldn’t make a great difference.

“Is it fair to say that more police presence would prevent murders? No,” said Héctor Pesquera, Secretary of the DPS. “When we had 17,000 officers in 2012 there were 1600 murders that year. It’s got nothing to do with it.”

Torres Rivera said even though criminal policy isn’t only a matter for the police, the demoralization of the police officers exacerbates the situation.

“You spend time working, you risk your life a couple of times every day and the government doesn’t even say thank you for your service,” said Edward Atanacio, a police officer in San Juan. “I have nearly 20 years of service, and I’m very depressed, very frustrated. My partners are very upset, like me.”

One of the biggest issues for police officers is the delay in being paid their overtime hours. For months after Hurricane Maria, an average shift for a police officer ranged from 12 to 16 hours. Many officers were victims of the hurricane themselves: some lost their vehicles and their uniforms and some were displaced by the storm, living in shelters with their families and at the same time reporting to work.

The Technical Compliance Advisor (TCA) to the Sustainable Police Reform in Puerto Rico issued a six-month report saying that “the Puerto Rico Planning Board was to receive more than $3 million from FEMA, and the Police Commissioner intended to utilize $500,000 for overtime”, but was later advised the money couldn’t be spent this way.

The TCA stated: “There is no question that issues of compensation and overtime have caused morale issues and are drivers of the current police slowdown and police absenteeism.”

Although Governor Rosselló Nevares stated  his government has paid over $90 million in overtime in the last year, some officers claim they still haven’t seen a cent.

According to Pesquera, this is an issue tied to the limits of an intricate and slow bureaucracy.

“It’s not an issue of money, it’s an issue of process,” said Pesquera. “The process is by hand, therefore the police officer fills in the paperwork and mails it to the central headquarters, that’s what takes the time. The process is awful, we’ve got to get rid of it.”

Lt. Acosta said that often the forms are not filled in correctly. They are sent back to the officer who has to start the process all over again. 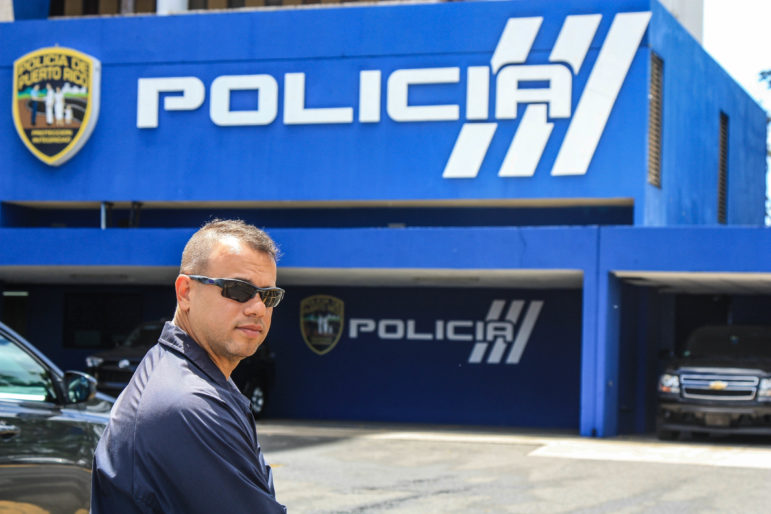 Photo by Stella Levantesi | Special for the CPI

Lieutenant Ferdinand Acosta in front of the General Headquarters of the Police Bureau in San Juan.

Overtime pay isn’t the only thing that has been troubling officers in Puerto Rico.

“We’re fighting different fronts here, salaries, benefits, they have no social security, medical plan is a pittance, and they passed a law several years ago that really eviscerated their pensions,” said Pesquera.

An increasing number of officers are leaving Puerto Rico to move to the United States. In the last year alone, 800 officers left the island, according to the Department of Public Safety.

“These issues really messed up the Police Department and a lot of officers were like ‘you know what, it’s time to move on,’” said Miguel Rodríguez, Vice President of Hispanic Officers Law Enforcement Association and a former police officer in Puerto Rico. In his current police department in Baltimore, around 200 officers are from Puerto Rico, he said.

A few months after Hurricane Maria hit Puerto Rico dilapidating the island, thousands of officers started to call in sick to press demands for unpaid overtime to help them recover from the wreckage. In December 2017 and January 2018 around 2,700 officers were absent daily.

“I called in sick,” said Atanacio. “I haven’t been reporting to my job since December, because I don’t want to waste my time.”

The police strike, also known as “blue flu”, left the streets uncovered causing a vertiginous murder surge. In the first 11 days of the year, 32 people were killed, making January one of the deadliest months in Puerto Rico’s history.

According to Rodríguez the hurricane “was the drop that really filled the cup up.” But Torres Rivera said that although many social problems have worsened after the hurricane, their origins lie in the political and economic problems of Puerto Rico’s policies.

“We must not lose perspective of the context in which this situation occurs:, its connection with the fiscal crisis and the austerity measures imposed by the government and the Fiscal Control Board,” said Torres Rivera. “It also has to do with nonexistent or ineffective [hurricane] government recovery policies.”

The TCA’s report confirms that hurricanes have accentuated Puerto Rico’s challenges with public safety and identified an immediate solution in “a solid strategic staffing plan” for the police bureau.

“They don’t have the manpower and that’s why they’ve got the surge of crime over there, ‘cause they can’t keep up,” said Rodríguez. “You need to bring the bodies that you need to keep up with the crime fight.”

Only four days after Manatí’s triple murder, on the 12th of April, a 16 year old and a 20 year old were shot to death in Loíza, to the east of the capital.

“The Investigative Unit in Carolina seized an AK-47 assault rifle and two semi-automatic pistols that they believed were used in these murders,” said Lt.  Acosta. “We’re trying to seize all the weapons we can, because that’s the main reason people get killed.”

According to the Police Bureau in San Juan, some guns come to Puerto Rico through containers from Florida, but many of them come through the mail, broken up into parts. Basically, they’re smuggled into the island like drugs.

Anthony Gómez Rivera was a 17-year-old who grew up in one of San Juan’s biggest project housing compounds, Puerto Nuevo. He was fatally shot, multiple times on March 24 in front of a building at 49 of Vista Hermosa, which ironically means “beautiful view”, and is located in Puerto Nuevo.

“We had five murders that weekend in Puerto Nuevo. It’s strange, we hadn’t had that kind of numbers in a few years,” said Lieutenant Acosta.

In Puerto Rico, weapons and drugs are closely related.

“Where else could you get the weapons from? It’s only the drug world,” said Omar Javier Cintrón, an Uber driver in San Juan. “It’s really easy to get guns, and I’m not talking about revolvers or pistols. I’m talking about machine guns.”

Cintron is a close friend to Anthony Rivera’s father. Although he wasn’t born in a drug-roped ghetto, many of his friends have, without ever coming out.

“They put kids in attics of four story buildings to work as watch outs for the drug lords; they give them radios and they start getting paid at 12 or 13 years old,” said Cintrón. “It’s really hard to get that kind of money when you’re so poor, without getting involved into all of that. There’s a saying in Puerto Rico that if you choose that type of life, you will end up dead or in jail, so there’s no possible way out.”

According to Puerto Rico’s Department of Public Safety the murder clearance rate in Puerto Rico ranges between 30 and 32 percent, meaning more than two thirds of the murder cases aren’t solved nor closed.

Lt.  Acosta said that people in Puerto Rico don’t cooperate, mostly because they are afraid of testifying or of getting involved in feuds related to drug business.

“Rivera’s parents were indicted five years ago from the federal government and spent five years in jail, they came out in December,” said Lt.  Acosta. “They told us that even though they have information on the murder of their son they’re not going to help the investigation. This is what we have to fight with everyday.”

According to Torres Rivera the increase or decrease of the murder rate in Puerto Rico during the course of this year will depend on the strategies developed by the government, taking into account both the needs of the population and the demographic changes.

“We must discard those measures that do not work, such as the so-called hardline policy and the government’s intention to implement the Broken Windows strategy,” said Torres Rivera.

“Broken Windows” policing is a theory whereby visible signs of civil disorder, such as vandalism, create an urban environment that encourages further crime. So within this theory, policing strategies that target minor unlawfulness are the key to generate order and prevent serious crimes, like homicides.

“It has been shown that such measures do not prevent crime because when they repress behaviors or individuals, it only reproduces criminality or moves it from one area to another,” said Torres Rivera.

The Department of Public Safety, on its part, is waiting for a study on Puerto Rico’s police human resources. A consultant group called V2A is set to release the results of their research on April 30.

“Because Puerto Rico is broke, for the last three or four years there hasn’t been any recruitment [within the police],” said Pesquera. “The Fiscal Oversight Board will not approve any recruitment and I will rely a lot on this study of necessities to know if we have enough people to do what we need to do.”