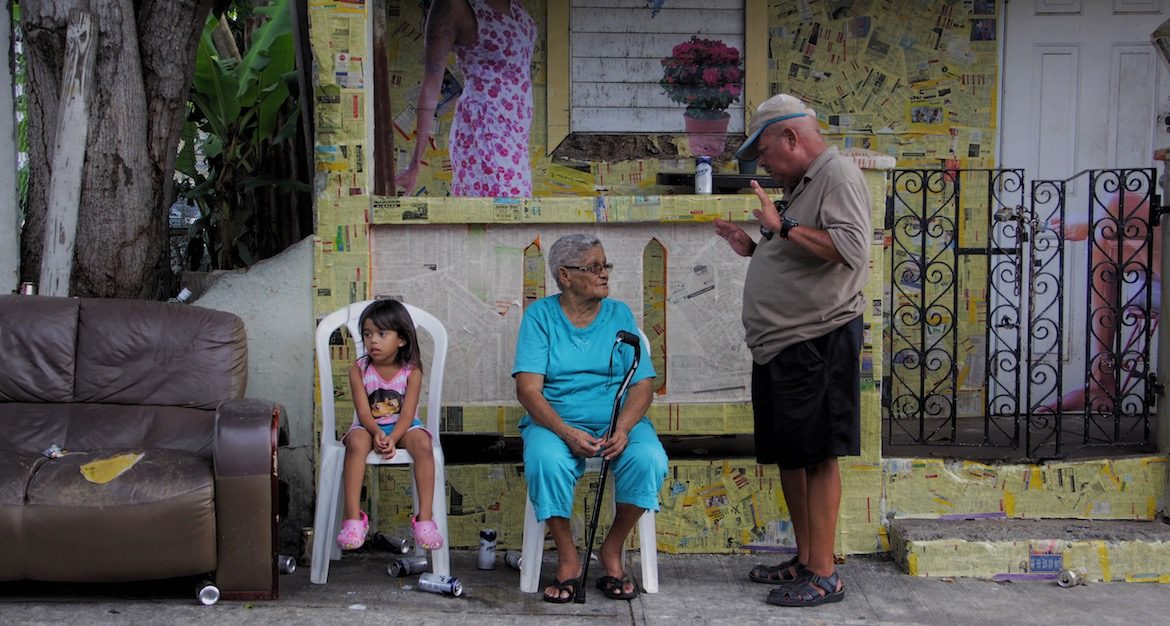 Photo by Mari B. Robles López

According to Manuel López-Zambrana, Puerto Rico has turned into a restaurant that should have a menu to please investors coming from the United States. He is a lawyer with the DLA Piper law firm and as a government adviser, he worked on the local legislation for the Opportunity Zones, a federal program that reduced to 20 percent the federal tax rate for funds used to invest in low income communities in Puerto Rico. The previous tax rate was 37.5 percent.

“The most important thing to have in mind is that Puerto Rico, as an Opportunity Zone area, is competing with other states… We have to be well aware that if we want to bring that capital here, they will be looking at a menu of other options…, they can choose from a well-done filet mignon, a lobster, and we have to come up with something that is better,” said López-Zambrana during a forum at the University of Puerto Rico Law School. 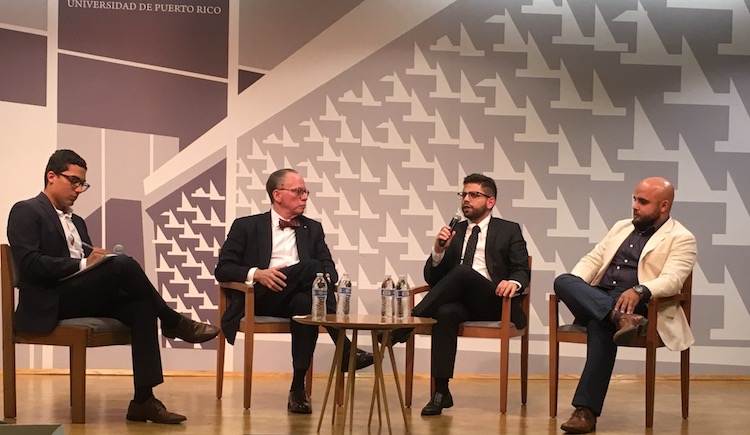 Manuel López Zambrana, second from the left, is an advisor to the Government of Puerto Rico on financial matters.

DLA Piper law firm is a tax adviser and lobbies in Congress on behalf of the government of Puerto Rico, Raul Maldonado, Chief Financial Officer, told the Center for Investigative Journalism (CPI for its initials in Spanish). The firm has more than $7 million in contracts with the Rosselló administration, and when the Opportunity Zones begin to operate, an additional contract will be drafted for them to work on this specific issue, Maldonado explained, while he was chief of staff.

As early as August 2018, DLA Piper signed a contract with the Treasury Department capped at $750,000, which includes “assisting Treasury in designing and implementing the program to launch the Opportunity Zones.”

That same month they signed another contract with Treasury, with a $250,000 cap, for legal services that include advice on “economic development initiatives such as Opportunity Zones.”

In case of a luxury hotel proposal, for example, in a low income Opportunity Zone, how will the community’s integrity be protected to avoid an increase in the cost of living and a population displacement, what is known as gentrification?” the CPI asked López-Zambrana

“From the beginning when I started studying the issue of Opportunity Zones I said ‘wow, the gentrification issue is very…’ What we have been finding, and let me tell you, the question is fair and valid, but for several reasons, that should not be a problem in the case of Puerto Rico. What I have heard from the United States is that the areas that are really depressed, which is where they are going to be investing these funds, are areas that do not have problems of gentrification per se. These are areas that are abandoned; nobody lives there. These are areas that have been deserted, abandoned, what you see a worn down building or an empty factory,” said López-Zambrana.

One of the areas that investors are observing, according to the government adviser, is the urban area of ​​Santurce, and Humacao, on the east coast, where hotels and shopping centers could be developed, he said.

“Another area that I see, and I know there is a lot of interest, are shopping centers. Where? In Humacao. That is going to help the economy there, along with the hotels that are being developed. An exciting economic ecosystem will be created. The Santurce area is a prime zone. You go down Fernández Juncos, or Ponce de León [avenues]: [what you see is] abandoned buildings… What this is going to provoke, hopefully, market dynamics of Opportunity Zones. And there are, because there are Puerto Rican fund managers, that’s the important thing, that have already identified properties out there. They have identified them and they are waiting for the law [to make the Opportunity Zones viable in Puerto Rico],” López-Zambrana added.

Community leaders are worried investments will bring displacements of residents due to rent increases in their communities.

The lawyer anticipated that most investors interested in this tax incentive will come to Puerto Rico from the United States, where the governors of the states designated only 25 percent of the land identified as low-income areas, as Opportunity Zones. In contrast, an exception from Congress allowed nearly 98 percent of Puerto Rico to be declared an Opportunity Zone, including Vieques, Culebra and Isla de Mona. With that exception, additional areas than those who fall into the census “low income community” definition were designated as Opportunity Zones.

The federal exemption program was devised by the Economic Innovation Group think tank and promoted in the U.S. Senate by Tim Scott, who succeed getting a bipartisan agreement that includes President Donald Trump’s tax reform. Puerto Rico’s Resident Commissioner Jenniffer González, won the support of Rep. Paul Ryan and other congressmen to include the “Puerto Rico Opportunity Zones Rule” in the tax reform, where all communities in the island, below poverty levels or not, qualified automatically as Opportunity Zones.

“The fact that almost the entire island of Puerto Rico is an Opportunity Zone, is a blessing, but at the same time it’s a complication. Because they [the investors] come to Puerto Rico and they say ‘the whole island, ok. But do I look south, east, north?’ It’s a 100 page menu of a lot of good food, you could be looking at the menu for hours and at the end don’t know what to do,” said López-Zambrana, who believes that the designation of 98 percent of the island as an Opportunity Zone is a “gift from Congress” to help in the reconstruction after Hurricane María.

The proposed bill to make this federal program viable on the island grants exemptions of construction related excise taxes and cuts the municipal tax payment by 50 percent for 15 years for investors from Puerto Rico and the United States. The legislative piece has been stalled in the legislature since November, although House Speaker Carlos Méndez, assured the CPI that he expects it to be approved by the first week of March.

One of the concerns with the Opportunity Zone in the United States is the possibility of provoking gentrification and displacement of people in poor communities, according to a study by Smart Growth America, a coalition of organizations focused on the impact of urban sprawl on the environment.

“The displacement of people from a community can occur when residential buildings are built with higher rents than those common in the area.This can cause the increase of rents in the neighborhood and affect people who have been living in the same community longer. This dynamic is part of the gentrification process,” the co-author of the study, Tracy Hadden, senior data scientist at the Center for Real Estate and Urban Analysis at George Washington University, told the CPI.

“When the value of properties increases in one area it can also affect other homeowners because an increase in the tax burden. A change like that could be unmanageable especially for older people with fixed incomes [like Social Security]. A classic story of gentrification is when fees are increased for elderly homeowners,” Hadden added.

One way to accommodate new residents without affecting the elderly would be to implement policies such as rent control and protections so that tenants cannot be evicted without consequences. These measures are known as “do no harm policies,” Hadden explained. 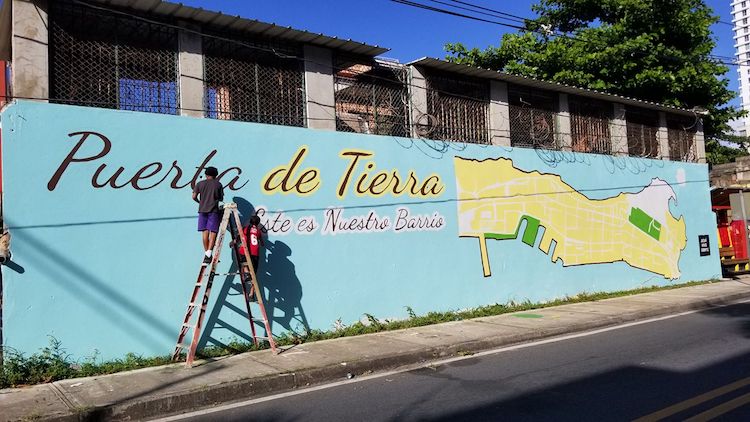 The residents of Puerta de Tierra have been working for several years to revitalize their neighborhood from within the community.

“The Opportunity Zones don’t come with ‘do no harm policies,’ this was not included in the legislation at the federal level,” said the data scientist.

López-Zambrana said that in Puerto Rico “we do not anticipate, we do not foresee that we are going to take all this area and roll over everybody, so to speak, and create a gentrification problem.”

Pedro Cardona, a planner and former vice president of the Puerto Rico Planning Board, told the CPI that most of the redevelopment processes involve a gentrification or “elitization” component.

The local Opportunity Zones proposed bill “eliminates all traditional mechanisms of compensation” for the impact of economic development projects, such as the payment of construction taxes, and the payment of 50 percent of the municipal tax during 15 years, Cardona said.