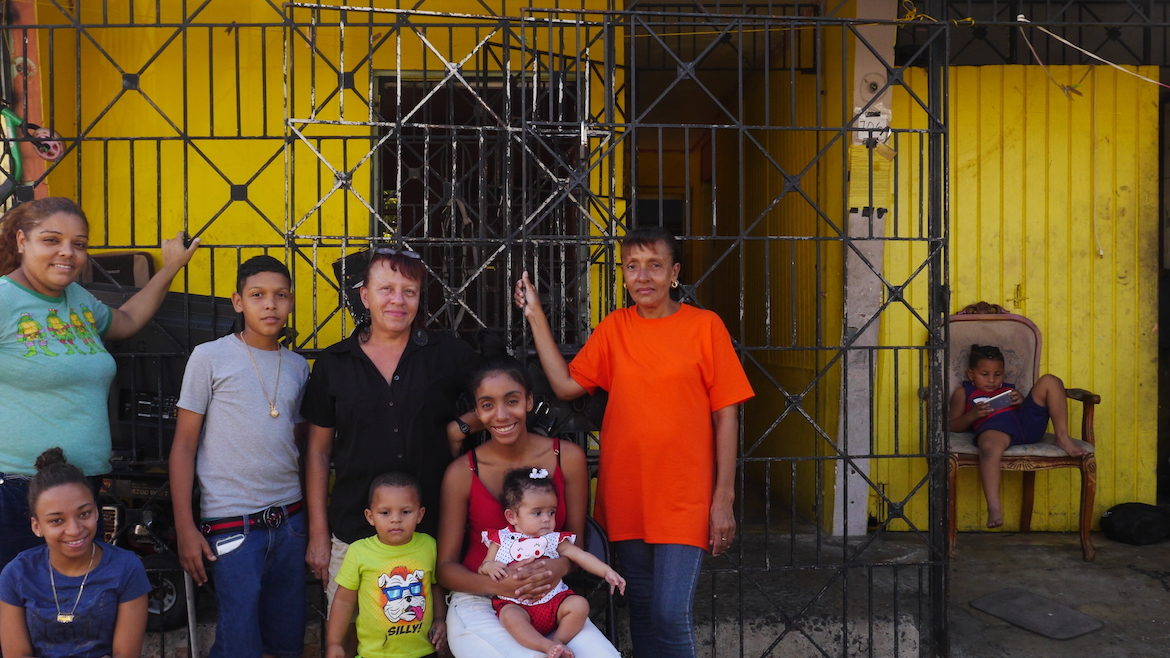 Yolanda Montañez, in the middle dressed in a black shirt, with her family in front of her house.

Yolanda Montañez’s home resembles that of a construction site. The floor is bare, with dirt and small holes. There are no walls separating the two bedrooms on the second floor, and all of her belongings are huddled up in plastic bags. But she’s happy because for the first time in almost eight months she can look up and not see the sky through a blue, plastic tarp but instead a new, brown roof.

For decades, the people of el Caño Martín Peña, a neighborhood in San Juan, have dealt with some of the highest levels of poverty, flooding, and gentrification in the country. But when Hurricane Maria hit it left Montañez and more than 1,200 members of this vulnerable neighborhood living under blue tarps.

Now the government agency that serves this community’s social, economic and environmental needs is at risk for potential cuts to their budget.

According to the Certified Fiscal Plan recently published by the Fiscal Control Board in Puerto Rico, which imposes several austerity measures, the Corporación del Proyecto ENLACE del Caño Martín Peña is one of the agencies under evaluation by the government either to be consolidated with other agencies or remain independent.

“What we do here, no other government entity is going to be able to do in the way we’ve been able to,” said Lyvia N. Rodríguez del Valle, the executive director of ENLACE for the past 16 years.

However, Rodríguez del Valle explained that the government has the objective of reducing the total number of government entities to 35, from 131. “Thus, there is still some uncertainty. Informally, we have learned that the current administration has no intent to consolidate ENLACE with other entities,” she said.

The plan also mandates a reduction in the budgetary allocations for all independent agencies in the years to come.

“As we operate in a very lean way, any reduction will have a significant impact,” said Rodríguez del Valle.

In the days and hours after the hurricane ravaged the community, members of ENLACE were the first on the ground in el Caño.

When the Federal Emergency Management Agency (FEMA) didn’t immediately show up, the group of community organizers provided the blue tarps to cover the shattered roofs and any necessary medical and emergency aid.

“Prior to Maria, there was a plan, there was a project and things set up,” said Rodríguez Del Valle. “There were incredible challenges already, like poverty, marginalization and access to education, but we were able to cater to those with a lot of limitations — but then the hurricane happened.”

Those limitations stem from Puerto Rico’s financial status, which like el Caño, was in a state of emergency well before the hurricane hit. The island, which has the population equivalent of  Connecticut, has a current outstanding debt exceeding $72 billion, more than almost all 50 states, except California, New York and Massachusetts.

“The austerity measure is the worst part of this, the way everything is focused in (Puerto Rico’s) government is to pay the debt, rather than deal with what is happening and prevent people from having to leave their country,” said Rodríguez Del Valle. “ (The community) is being forced out and it’s very painful to see this.”

There has been a mass exodus of Puerto Ricans from the island. Pew Research estimates that over half a million people have left the country in the past decade. By the end of 2018, the government projects around 200,000 more residents will flee the island in lieu of permanent residence in states like Texas, Florida, New York and Pennsylvania.

There are various reasons why Puerto Ricans are leaving in droves. For some it’s the country’s financial status, lack of opportunity and access to education. But for Montañez, her sister Milagros Montañez and their neighbor Luis Ramos, leaving the island was never an option until Maria — even after years of flooding and inequity.

A Community Flooded With Issues

The water channel, which runs from the San Juan Bay in the west to Laguna San José and Laguna Los Corozos in the east, is also the epicenter of some of the region’s major public health and housing issues.

“With rain or without rain, it would flood,” Montañez said of the state of their community before the hurricane.

The residents along the national estuary lack the basic infrastructure to deal with the raw sewage that comes through the channel. Without a proper sewer system, the homes would flood with dirty toilet and sink water years before Maria hit.

“The situation with the house after the hurricane put me in a depression and that was the only time I considered leaving this community,” said Montañez, who has lived in el Caño her entire life.

In the immediate days after the hurricane hit the island, Montañez and her sister, took refuge at Puerto Rico Convention Center in San Juan, along with thousands of others.

When her neighbor Luis Ramos heard the initial warnings about the storm, he packed up his belongings, and left el Caño with his two dogs and one cat. 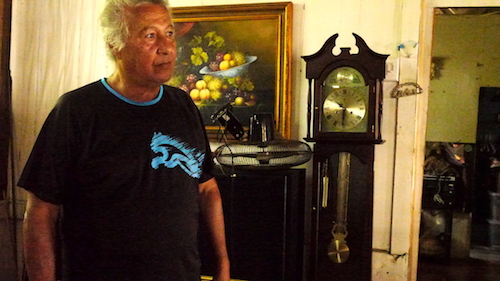 When the residents returned, they found their homes uninhabitable – filled with around two feet of dirty, channel water. Their roofs were completely ripped off.

“I spent the first few days in a family members home because staying at home felt like living on the street because it continued to rain for the days following the hurricane,” Ramos said.

Over the next month, a sense of hopelessness began to overwhelm the sisters. When Yolanda Montañez finally returned after two weeks to her job as a secretary for the San Juan municipality, she began to feel the effects of post traumatic stress disorder (PTSD).

“When I was at work and anyone would call me and tell me that it was raining or anything, I would start crying and getting stressed and anxious,” she said.

But the hardest part for both women was the effect it had on their grandchildren, who became ill due to the mold and sewer water in their homes. Although these public health issues weren’t new for the families, the impact and heavy debris of the hurricane made it worse. 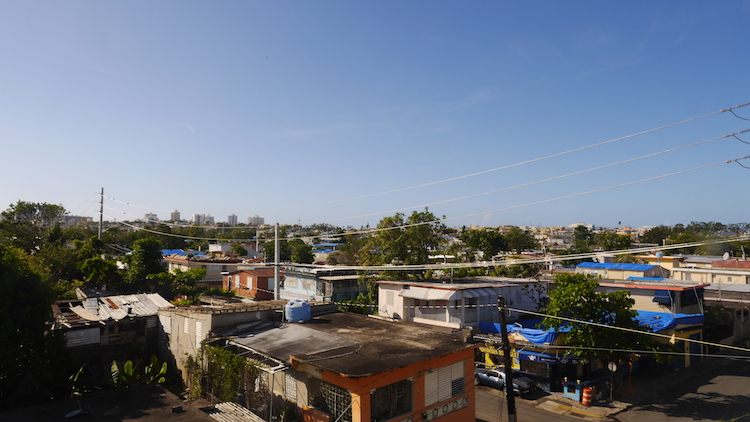 Blue tarps can be seen all over El Caño 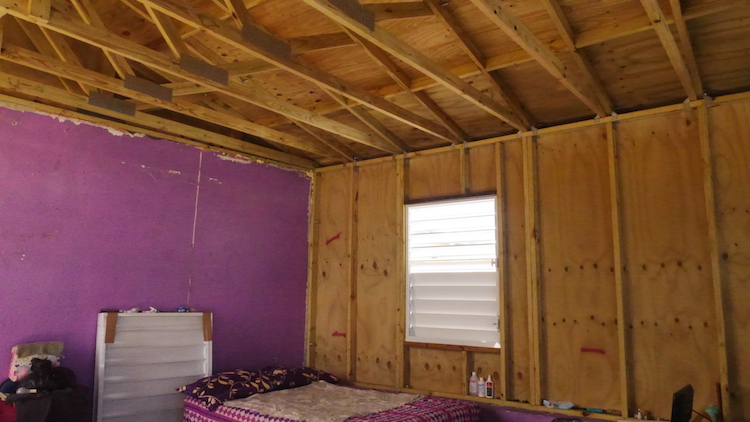 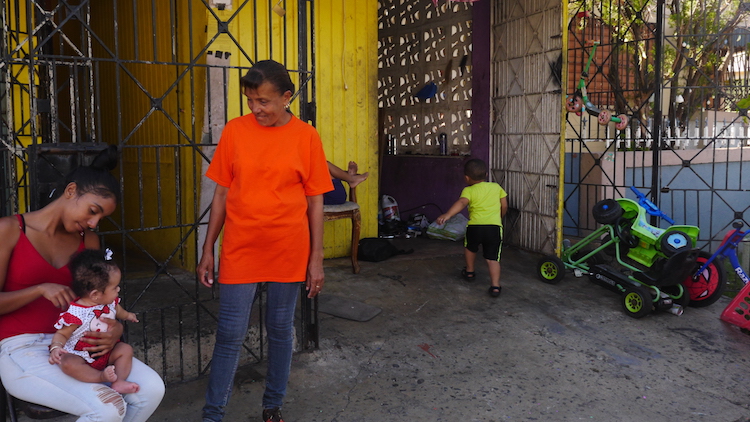 Part of Yolanda Motañez's family outside her residence. 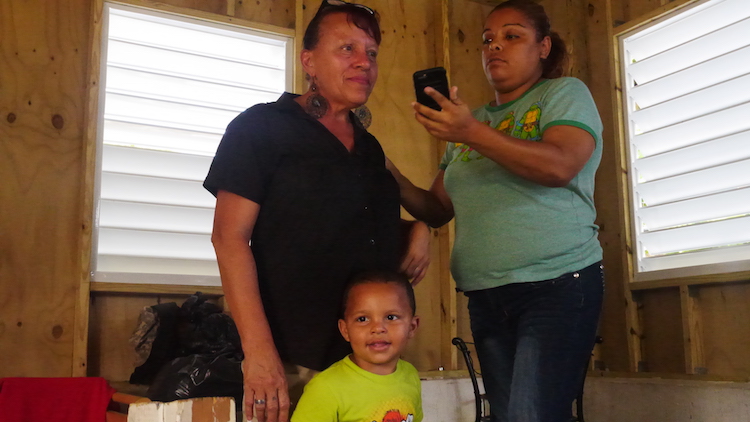 Photo by by Farnoush Amiri | Center for Investigative Journalism

No Land Rights, No Aid

For many residents of el Caño property rights are another obstacle. Most don’t have the rights to the land they and their families have been living on for generations. This means they can not mortgage, lease or sell the land.

This issue of informal housing became the most prevalent after Maria, when residents began to apply for aid and were denied on the basis of  inability to prove land rights.

According to FEMA records, since the hurricane, the agency has received nearly 1.2 million applications for assistance and has denied 60 percent of those applications because the land deeds are not in their name.

The last time FEMA denied Milagros Montañez’s application for aid was on April 13. By then, she had taken the matter of rebuilding her home into her own hands. A few days prior, a private contractor installed a roof.  She is now in the process of changing floor panels on the second story of her home, which aren’t safe to walk on.

But despite the endless obstacles, Ramos and the Montañez sisters keep fighting. There are decades of history and relationships that have been built along el Caño.

“This home is the center of the family. On the weekend everybody comes here with their kids,” said Milagros Montañez ‘s daughter, Yaxyra Rosario Montañez, as her nieces and nephews run around her aunt’s uneven, concrete floors.

The streets in el Caño are filled with generations of residents. There are kids riding their rusted bicycles, older men playing chess, and an influx of neighbors coming and going, checking in on one another. The only thing that seems to have remained a constant for these residents is their sense of community.

“They are tired and they are tired of the government not taking a sense of action. But their sense of belonging is stronger than the situation they live in,” said Mariolga Julia, the special projects manager at the Community Land Trust organization, an entity of ENLACE.

ENLACE won’t give up on this community either. Even as they face potential cuts to their budget, Rodríguez Del Valle believes they’ve put in too much work and too many years to let it go.

She does not want to see the residents moved to public housing, which happened to this community in the 50’s.

“Unfortunately that seems to be part of the vision that some people still have today on how to approach the issues after Hurricane Maria,” Rodríguez Del Valle said

For the past few decades, Rodríguez Del Valle says she has seen sketches and proposals for hotels, marinas and other tourist attractions to take the place of these communities.

In less than a month the 2018 hurricane season is set to begin and the Montañez family and Ramos believe their new roofs will withstand. They are hopeful for the future of their community and Puerto Rico.

But as the U.S. territory grapples with their burgeoning debt and crumbling infrastructure and power grid, they are more vulnerable than ever.

“I can’t even fathom what’s going to happen if there is another hurricane here with the conditions that you see out on the field,” Rodríguez Del Valle said.