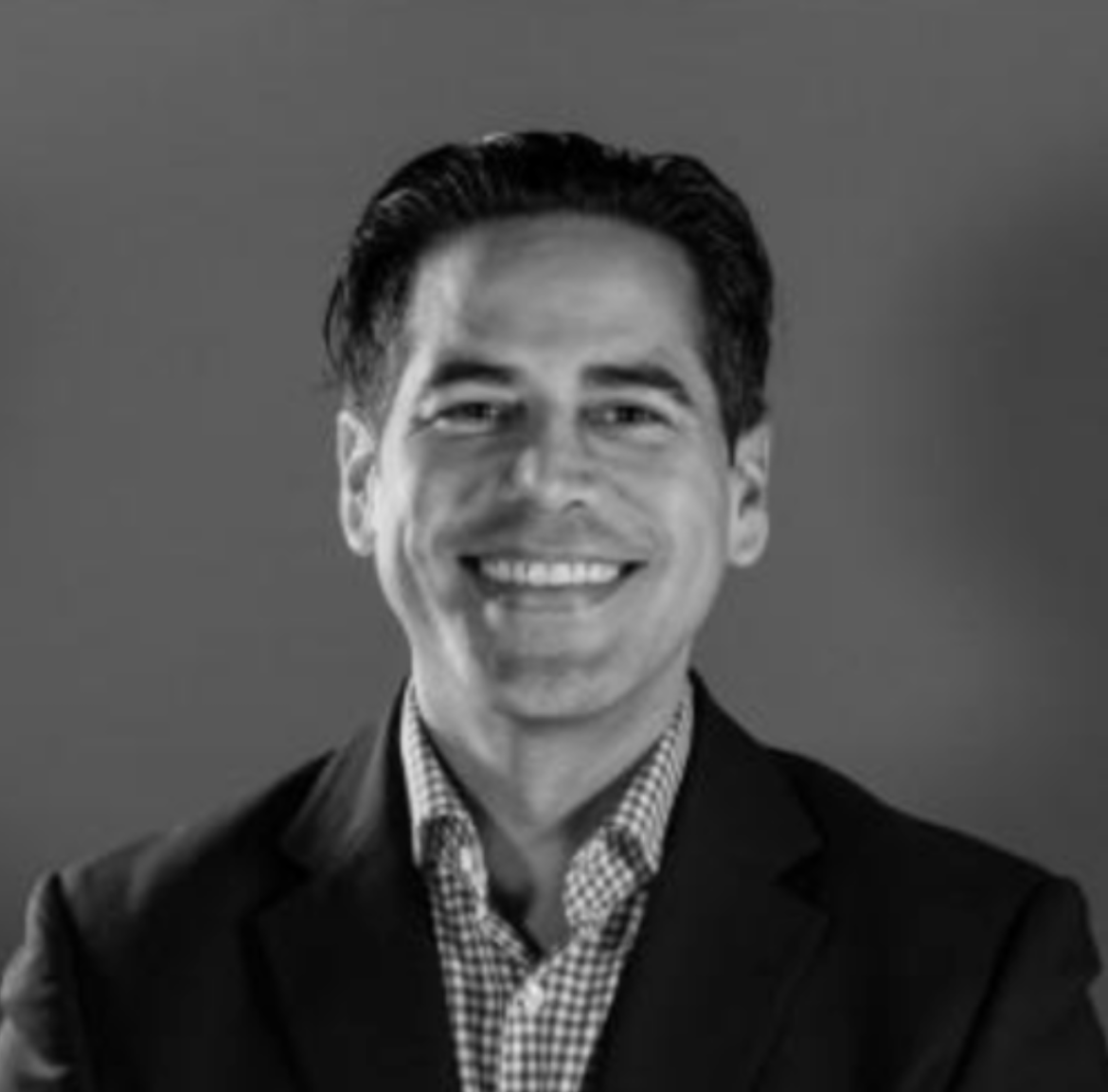 Although after the publication of the Telegram chat, Publicist Edwin Miranda-Reyes claimed that the political work discussed in those conversations was billed and paid for by the Ricardo Rosselló political committee, during the period included in the 889 published pages there were no checks made out or bills issued by the committee on behalf of his advertising agency, the Center for Investigative Journalism (CPI in Spanish) found.

The CPI had access to the income and expense reports submitted by Ricardo Rosselló’s political committee to the Electoral Comptroller in which every candidate is legally required to — on a quarterly basis — disclose the money collected by their committee through donations or political activities, as well as all expenses for services received that have been paid or are pending payment.

Miranda-Reyes said in written statements on July 12, 2019: “The FP+1 agency is responsible for providing advertising services to Ricardo Rosselló’s Committee for tasks related to promoting political affairs. That company handles social media. The expenses related to these services are verified, billed and paid for by the (political) committee.”

However, between November 2018 and January 2019, the period of the chat published by the CPI, there is no report of payments to FP+1 by the Ricardo Rosselló committee. FP+1 agency, belongs to Miranda-Reyes and was charge of the political campaign publicity efforts. FP+1 does not appear either with pending bills during said period of time.

A review of the 889 pages shows that there was ongoing propaganda activity to draw attention to the to the former governor’s image from the partisan perspective through the publicist’s interventions in government matters. In the chat, Miranda-Reyes played an important role in the recruitment and activation of Rossello’s New Progressive Party followers to carry out partisan work in social media, while giving opinions and offering recommendations to address issues related to government matters.

In his first written statements after snippets of the Telegram chat began leaking , Miranda-Reyes tried to project that no member of his companies, the KOI Americas or KOI Arise team, which were supposedly paid from work for government agencies, had been activated to vote or participate in polls to enhance Rosselló’s image or his administration.

However, it was La Fortaleza’s former Secretary of Public Affairs, Ramón Rosario-Cortés himself who said in the chat that at least one KOI employee actively participated in social media, sharing the graphics and creative work done by Miranda-Reyes’ advertising agency. On Dec. 8, 2018, and in response to Miranda, Rosario said that Luis Ramos is a KOI employee and “that he has an incredible ability to drive anyone crazy.” This confirms the participation of KOI employees, and not FP+1 staff, in the publication of propaganda on social media.

Miranda-Reyes shared another post by Luis Ramos, in which he recommended that the chat members read the comments.

After the CPI published the 889-page excerpt of the exchange among Rosselló-Nevares and his closest team members, Miranda-Reyes reiterated in an interview with El Nuevo Día that the work he performed following the instructions of the ex-governor and government officials, such as former Secretary of Public affairs and La Fortaleza’s main legal advisor, Rosario and Alfonso Orona, respectively, were as the political committee’s publicist, since KOI allegedly no longer provided services to La Fortaleza at that time.

In that interview published on July 16, 2019, Miranda-Reyes insisted that the chat was used to discuss political issues. However, a review of its content done by the CPI confirms that the publicist participated in the discussion of strategies to counteract negative public opinion on government issues such as security, Mario Marazzi’s tenure at the Puerto Rico Institute of Statistics, and Education Department initiatives, among others.

As part of that direct intervention in public affairs — beyond partisan politics — the chat evidences that the publicist shared information about government issues, such as the controversy over cockfights, and advised on how to handle the public discourse related to the delays in the process of obtaining federal recovery funds after Hurricane María.

On this issue, Miranda-Reyes proposed using Rosselló-Nevares’ Twitter account to respond to the Fiscal Control Board’s demand imposing a work requirement on Nutritional Assistance Program (PAN, in Spanish) recipients in order to establish that it was an initiative of his administration.

Another example of his intervention in official matters — not as the publicist of the political committee — was his follow up on an announcement by Rosselló-Nevares on Dec. 2, 2018 regarding projects that would be developed in some 200 closed school sites, in an attempt to put a positive spin on the public cutbacks policy, to allegedly achieve savings.

The next day, when he did not get the exposure he expected, Rosselló-Nevares ordered “moving the maps on social media” and making a video. It was also discussed issuing a press release from the Federation of Mayors on the matter and the need to get interviewed by the media.

“I asked Lou yesterday to create an old video with clippings since 2017, yesterday’s news and maps; but he couldn’t. The guys at the agency have it in the cue to do it this morning,” the publicist responded to Rosselló-Nevares at 6:54 A.M. on Dec. 3, 2018.

A few hours later, at 10:02 a.m. Miranda-Reyes published in the chat the map requested by the governor, commenting: “Editable map for interview about transfer of schools.”

Afterward, upon learning that the secretary of Public Affairs was working on a press release on behalf of the mayors, the publicist responds “And I’m making a video so that an agency head or mayor releases it and [I’m] aggressively hitting up the Sondeo NotiUno. SAAAAAAAALSA!” according to the comment posted at 10:20 a.m. This type of follow-up wasn’t done for any government agency, only for political propaganda using mayors and agency heads to emphasize the governor’s public image.

Although Miranda-Reyes’ advertising firms did not have direct contracts with the Governor’s Office after June 30, 2018, the publicist continued to do governmental work for La Fortaleza activities.

For example, with no contract with the Governor’s Office or the Department of Public Safety, Miranda-Reyes participated in the chat discussion about the spike in the crime rate in January 2019, the crisis in the Forensic Sciences Institute, and how to counteract the image problems of former Department of Public Safety Secretary Héctor Pesquera, whose resignation was sought in public opinion polls.

In addition, the publicist proposed content for three issues that, in his opinion, the Department of Public Safety had not emphasized about the Forensic Sciences Institute.

He mentioned the Ballori ad agency and proposed them to help with the summit, presumably the Security Summit that Rosselló-Nevares announced following the murders and shootings in broad daylight that were reported on those dates. The Security Summit was held Jan. 23, 2019 at the Convention Center in Miramar.

Miranda-Reyes and his chat partners main concern was to enhance the former governor image over any issue published or discussed in the media and social networks. 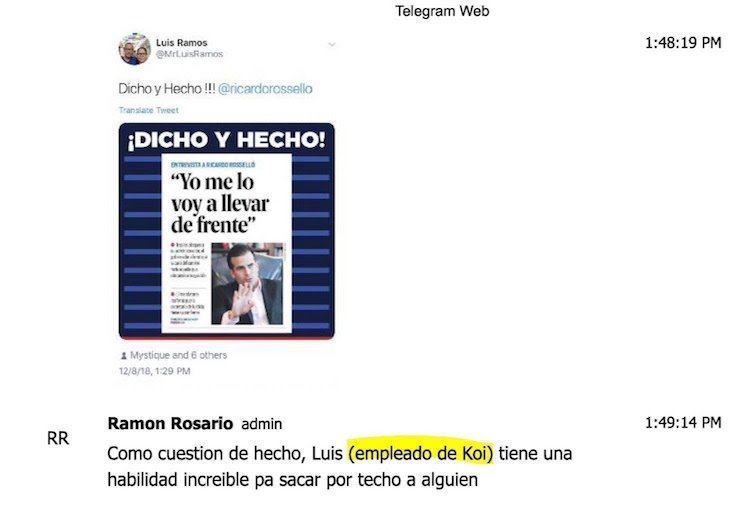 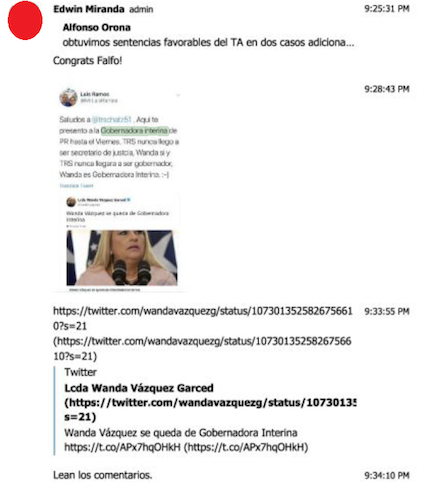 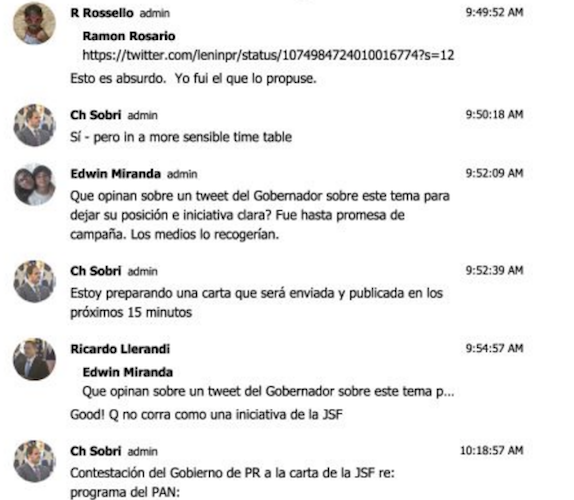 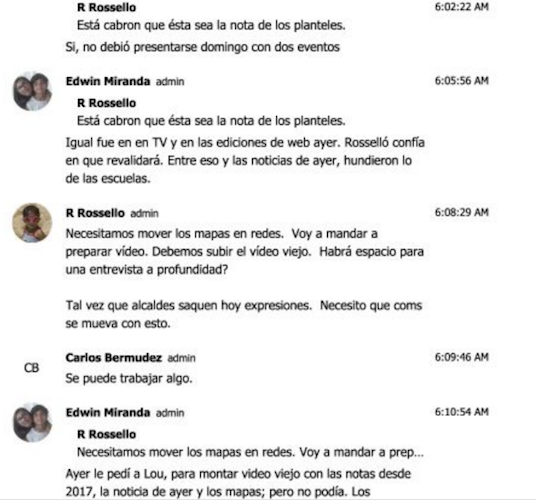 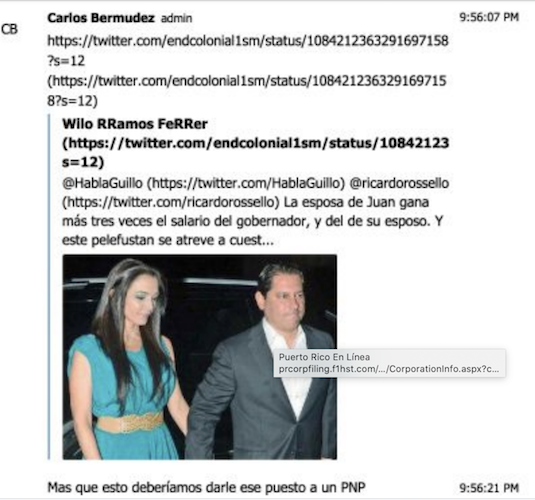 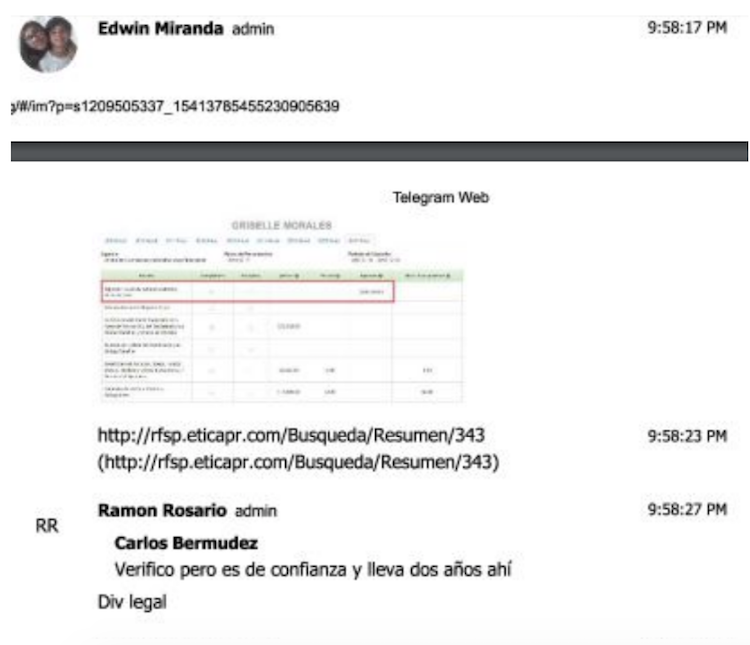 The chat also reveals that Ricardo Rosselló’s administration inquired about the opposition and their families to obtain information that was later shared on social media through accounts linked to an army of bots to generate adverse public opinion and counteract the oversight.

Such is the case of Griselle Morales, wife of Puerto Rican Independence Party Sen. Juan Dalmau, whom Carlos Bermúdez, former Fortaleza communications advisor, refers to regarding her position in the Office of the Commissioner of Financial Institutions (OCIF, in Spanish).

A tweet from the senator criticizing the governor triggered the search for information on his spouse’s finances to tarnish the validity of Dalmau statements alleging that Morales reportedly earned three times the governor’s salary. The information was false, as it was taken from a summary of the financial statements that she submitted to the Government Ethics Office that includes the family´s total income and not just her salary.

The governor intervened directly in the discussion suggesting the replacement of the Independence party senator’s wife in the position she has held for years at OCIF.

“Juan’s wife earns more three times the governor’s salary, and her husband’s. And this ‘pelefustan’ [good-for-nothing] dares to question…,” according to a tweet from the Wilo Ramos account shared by Bermúdez.

“Even more than this, we should give that position to an NPP [member],” says Bermúdez.

That’s when Rosselló-Nevares intervenes to ask: “Which position is it?”

Bermúdez tells the governor that he would find out, but that he believes she is not a regular employee but rather hired by contract , after former State Department Secretary Luis G. Rivera-Marín said Morales worked at the OCIF.

“We have hit hard since this morning with the information that Ramon gave me and that Luis Ramos got. Now they got photos…,” publicist Edwin Miranda texted, confirming that after Dalmau published his criticism, KOI employee Luis Ramos got information to attack him on social media.

In just two minutes, Miranda published the screenshot of the Financial Summary section of those public servants who are required to submit financial reports to the Government Ethics Office highlighting the total salary, compensation and other income line item for Dalmau’s spouse for 2017.

That is, as soon as the governor asks about Morales, the chat collaborators moved to get additional information available on the GOE’s website.

As stated by a warning at the beginning of that section, the summary shows the information the public servant provides through the Financial Reporting System, as established by the Government Ethics Law.

According to the analysis of the chat done by the Puerto Rico Bar Association, this would be one of the seven possible crimes identified in the excerpt of the published conversation, since it violates Article 157 of the Criminal Code that prohibits the illegal collection of personal information to discriminate against a person’s permanent job status.

One thought on “Publicist Edwin Miranda tried to conceal his propaganda work, but reports say otherwise”