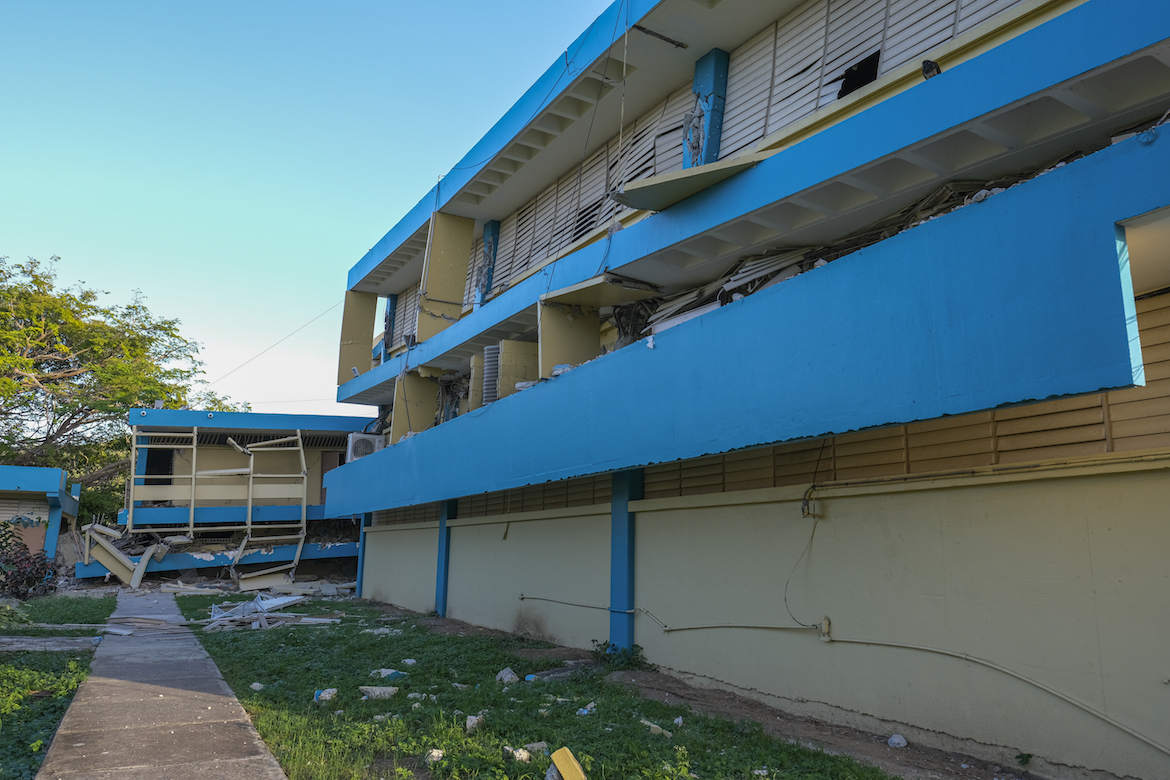 Puerto Rico lost more than 684 public schools during the last decade due to the closure policy promoted by administrations of both main political parties and natural disasters such as Hurricane María. The closings, which spiked under the tenure of former Education Secretary Julia B. Keleher — currently facing federal charges — are coupled with the loss of those schools that will not be able to reopen due to the damage caused by the earthquakes in the southern region that took place in early 2020.

Although the government has mandated a curfew to deal with the coronavirus pandemic that extends to early May, returning to classrooms will be harder for students in the municipalities included in the disaster declaration the Federal Emergency Management Agency (FEMA) effected after the earthquakes.

Within the 32 municipalities under the earthquake disaster declaration, 14 qualify to receive public assistance from FEMA to repair or rebuild schools.

Although the survey was limited to a “visual inspection” to identify “significant damage caused by the seismic events registered to date,” the engineers contracted by three government agencies concluded that 30 of 157 schools evaluated in these 14 towns are not apt to reopen because they “show severe structural damage.”

Furthermore, they classified 56 of those 157 schools with the yellow code because “they saw some structural damage that requires attention,” so the structure can only be partially used. Given the population’s self-isolation conditions, it is uncertain when any of these schools will be repaired or reinforced.

The Guánica, Peñuelas, Sabana Grande, Guayanilla and Yauco municipalities were practically stripped of schools for their 13,612 students (enrolled through May 2019). The school closure policy has meant, for example, the elimination over the last decade, of 36 of 72 schools located in those five towns, which now have 22 schools identified as unfit for use after the earthquakes.

Just one of seven schools in Guánica opened partially — the María McDougall school, located in the town’s urban center, and could only house students in one of its three buildings. Peñuelas, with the same number of schools, lost three, while another four could open only partially, because two have the “short column” structural defect. Sabana Grande, with only four schools, must keep two closed and the rest will need repairs before welcoming students. Guayanilla, with only six schools, will not be able to reopen four of them and only one other will open partially. Meanwhile, Yauco lost seven schools while another seven can only open partially, and the only one classified as suitable to open is built with the short columns.

The short column is a type of unyielding support wall that could cause the collapse of the structure in case of a seismic movement.

Going back to school under tents in open spaces after the quakes lasted only a few days, because soon after, the curfew due to coronavirus, ordered physical distancing. Such was the case for some students of the Gloria M. Borrero school, the only one in Guayanilla, declared in condition to renew the semester.

Middle school math teacher Amarilis Nazario said she spent a week under a tent set up outside the school attending to students while they waited for other inspections following the aftershocks.

She explained that the faculty, together with the director, planned to teach students divided by grades since the available tents were not enough to accommodate the more than 700 students enrolled in the school located in the Macaná neighborhood.

In an interview with the Center for Investigative Journalism (CPI, in Spanish), Nazario admitted: “I’m not ready to go back to a tent” after COVID-19, while warning that receiving students from the town’s four other schools would create a potential infection hotspot.

Damage to the door frames in the classrooms of the Dalila Torres School in Guayanilla.

In other cases, such as the Lola Rodríguez de Tió high school in San Germán, the second semester never started in January after being partially certified, because three of its 40 classrooms were affected by the quakes.

Although in early February the Education Department assured it would pitch tents on the school’s soccer field to start classes, this never happened, math teacher, Ángel Nazario confirmed.

In Ponce, students from 11 schools were able to attend classes for almost a month at the Complejo Ferial and a space within the Centro del Sur Shopping Center after the Department of Education allocated $2,102,434 from the earthquake emergency fund approved by the Fiscal Control Board (JCF, in Spanish) for leasing contracts with Prime Property Management Group and Intertrade Development Group in Ponce.

On January 7, the Board approved $260 million to meet the needs associated with the earthquakes, of which $103 million had been spent as of March 3, according to its Executive Director, Natalie Jaresko.

The Department of Education did not answer the CPI’s questions as to whether the leases in Ponce will be canceled considering the self-isolation decree mandated until at least May 1. The agency neither addressed what is the plan for in person classes when school classes are resumed.

Prime Property Management President Abel Misla Villalba said he contacted the Department of Education about two weeks ago, but the agency had not yet decided to suspend or postpone the contract. He said the agency is evaluating whether distance learning will continue next semester.

“I’m still processing the blow because I made a large investment and haven’t received any payment. I invested more than $500,000” to set up the empty location in the shopping center, the businessman said. “The ball is in their court,” he added, although he hopes the agency will make a decision by May 1.

In late January, Education Secretary Eligio Hernández Pérez, said based “on the recommendation of the Interagency Committee [on Infrastructure, appointed by La Fortaleza], and in consensus with the College of Engineers and Surveyors, none of the Education Department’s infrastructure is to be used until a re-inspection process of these schools is carried out following specific standards for these municipalities.”

The director of the Puerto Rico College of Engineers and Surveyors’ Earthquake Commission, Félix Rivera, said there was a meeting at La Fortaleza on Jan. 5 in which Gov. Wanda Vázquez Garced announced the creation of a task force to respond to the southern region’s emergency “but as far as I know, nothing has happened there.”

“This is the best time to work in these schools, now that they’re empty. We can wear hats, safety glasses, masks, boots, gloves. It’s an industry that uses almost the same equipment that a doctor uses to operate,” Rivera said regarding the construction industry’s security measures. He estimated that the reinforcement work in a school can be completed in three to six months but “someone should be planning that right now.”

“We would have to start now,” Rivera insisted, if safe educational spaces are to be guaranteed for the 2020-21 school year that should start in August.

The adviser to the Infrastructure Committee, Carlos I. Pesquera, admitted that, “with the issue of coronavirus, it is obvious that there hasn’t been a continuity of the process. A consensus had been reached and both AFI [the Infrastructure Financing Authority] and the [Public Buildings Authority] had instructions on how to implement a process to repair   southern area schools. AFI was identifying a budget to make the corresponding school repairs.”

But AFI Director Eduardo Rivera Cruz, told the CPI something different, since he confirmed that the work agreed between his agency and the Department of Education was limited to the inspection of 203 schools.

“It’s the only thing we’ve been doing in coordination with the Department. The Education Department has to arrange everything that has to do with the budget with OGP [the Office of Management and Budget] and the Fiscal Control Board. Until I have the approval from these two entities, they cannot contract me [as AFI, to repair or rebuild schools].”

Rebuilding with recovery funds won’t start this year
While the pandemic has halted the response to the earthquakes, the third anniversary of Hurricane María is approaching without a single permanent project underway yet at the island’s schools using the $2,014,200 in Category E public assistance funds that FEMA allocated.

An audit by the US Inspector General (OIG) noted that the Department of Education lacks the capacity to manage assistance funds or expertise to complete emergency work or submit reimbursements on time.

For this reason, the OIG recommended FEMA to work with the Central Office of Recovery, Reconstruction and Resiliency, known as COR3, through a memorandum of understanding (MOU) between AFI and the Department of Education to carry out this work.

FEMA concurred with the recommendation on March 10 and estimated the MOU should be ready by February 2021. That means it would take almost a year to get it done.

But the Education Secretary told the CPI in January that the lack of progress in this area was because, “FEMA’s methodology is to go project by project. The Department of Education   has more than 6,000 buildings. They want to negotiate with the Department to specify the amount of funds destined or assigned to each school so the work can start.”

The OIG report also states that FEMA failed to issue clear and consistent guidelines to the Department of Education on handling Category B funds for emergency improvements, leading to the approval of only six out of 17 projects under this category more than a year after the hurricane disaster declaration, causing that “students and staff attended unsafe facilities” last school year.