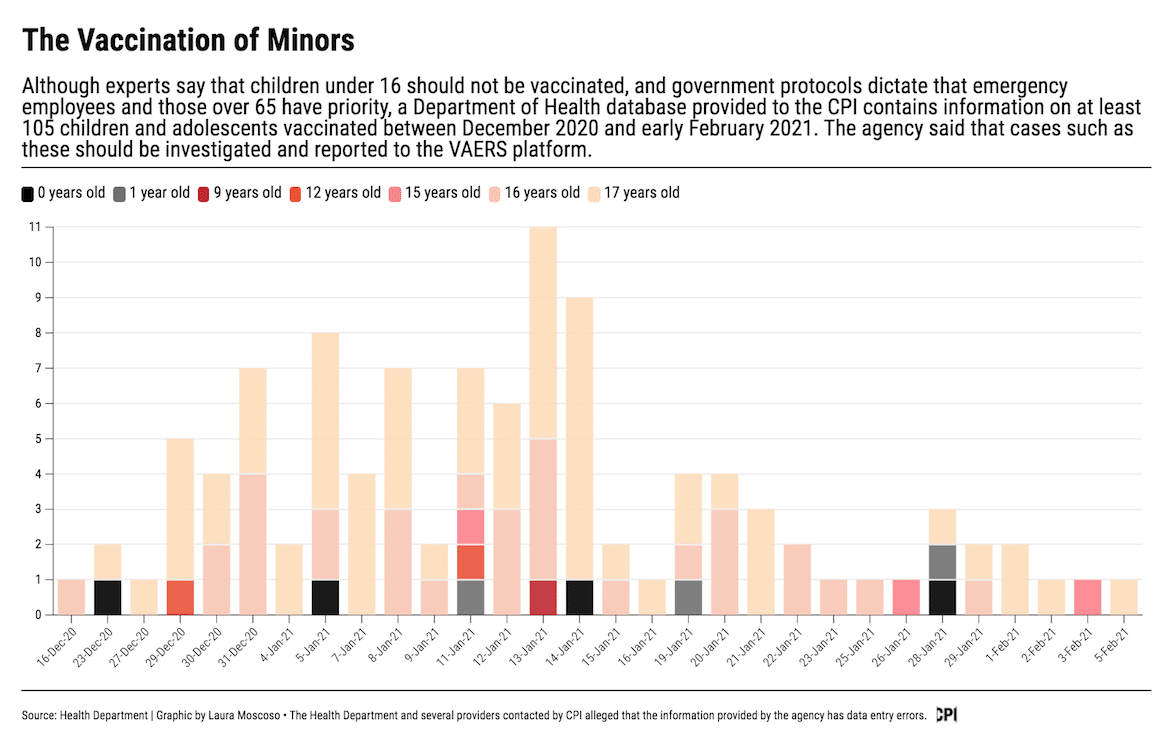 Four months ago, the Center for Investigative Journalism (CPI) published a story that revealed that at least 105 minors were vaccinated against COVID-19 by public and private providers in Puerto Rico. At the time, we had the Department of Health’s Vaccination Registry data through Feb. 23. The information revealed that 40 centers had administered at least the first dose of the vaccine to children aged 0 to 17 from Dec. 16, 2020 to Feb. 5, 2021. These cases showed that children and teens were vaccinated when they were not supposed to be, some even against the Centers for Disease Prevention and Control (CDC) guidelines at the time: vaccinating children under 16 was not allowed in any of the phases.

When the Department of Health (DH) was questioned about this information on children under 16 who appeared vaccinated, the agency said, through its spokesperson Lisdián Acevedo, that the dates reflected in the agency’s database “were a mistake” in data entry. She added that the finding should be reported to, and investigated by, the VAERS (Vaccine Adverse Event Reporting System) platform, which collects data on all administered vaccines in the United States. The healthcare providers who administered these vaccines contacted by the CPI offered a similar response.

Regarding the 16 and 17-year-olds vaccinated out-of-phase, both DH and the providers justified it with arguments that in most cases turned out to be false, such as that they were participants of the Department of Health’s Intellectual Disability Program, that they were health professions practitioners or interns in hospitals, and that they were medical offices employees or contractors who did not treat patients, such as messengers.

CPI sources confirmed that many were relatives and close associates of doctors or people connected to the healthcare industry or the government. The Vaccination Registry itself places the National Guard, that is, the government, as second on the list of entities who vaccinated minors out-of-phase.

Months passed and neither the DH nor the providers announced the status of the investigation they said they had launched. Vaccination continued, the medical indications for the Pfizer vaccine were expanded (it can now be administered to people 12 years of age or older), and the government even offered to pay so that the population would be encouraged to get vaccinated.

The facts leave many unanswered questions: What happened to the investigation that was to begin at the end of March, following the reports   from the CPI? Why was the Office of Health Investigation not activated back then, when the DH said it would investigate? Why does Dr. Iris Cardona, continues to refer to the cases of vaccinated minors as “errors” when she acknowledges that these inoculations are not isolated cases? If in March there were 105 records of vaccinated minors and today there are 87, what was the methodology used to fix the Vaccination Registry? Why does the Department of Health’s strategy to immunize the island’s population continue to have these types of flaws and setbacks seven months later? What will the consequences be for these providers who have administered vaccines ignoring the guidelines of the health authorities?

Despite all the public threats to violators by Health Secretary Carlos Mellado, so far, the agency has taken no action on a single case of alleged violation of the vaccination rules against COVID-19.