When environmentalist Juan Rosario traveled to an Amish religious community in Iowa, to learn to make compost, he was surprised that they had a laboratory and the services of an expert in chemistry. What was a scientist doing in a place where people live far from technology and practice ecological farming with the simplest of methods? 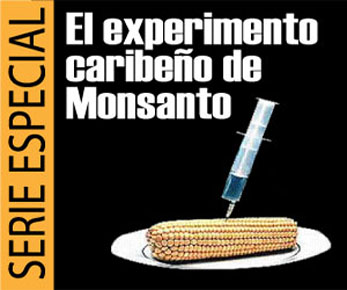 An Amish dressed in their style, with a wide-brimmed black hat, white shirt, and black pants and black jacket, pointed toward a large cornfield on a nearby farm. “The scientist helps us verify that pollen from genetically modified corn does not contaminate our crops,” he told Juan Rosario. “It’s the same corn that you develop in Salinas.”
Puerto Rico, laboratory for corn, sorghum, cotton and transgenic soybeans.

The island is hosting a reality that the government hides and sponsors: the island is an important center for eight companies, seven of them multinationals, that are developing the first generation of genetically modified seeds for distribution to United States and around the world. The strongholds of these corporations extend into public and private farms, especially in the best farmland along the island’s southern coast, which in the last century was under the rule of His Majesty sugarcane, exalted by large landowners that sought to take over the land.

Most of these seed developers occupy more than the 500-acre limit that the Constitution of Puerto Rico allows, while receiving hefty government benefits and advantages under the Law to Promote and Develop Agricultural Biotechnology Companies of 2009, tailored to favor them.
Among them is the world’s main transgenic seed developer, Monsanto, which leases about 1,500 acres of land between Juana Díaz, Santa Isabel, Isabela and Aguadilla. Of these acres, 500 are public property administered by the Land Authority, and the rest belongs mostly to the Succession Serrallés in several southern towns, confirmed Juan Santiago, the company’s chief operating officer in Puerto Rico.

But having more than 500 acres is an apparent violation to the provisions of the Constitution of Puerto Rico, which prevents an agricultural corporation to own more than 500 acres. The purpose of Section 14 of Article VI was to prevent American landlords to come implement a monopoly and squeeze out the smaller local farmer.

New settlers
Are we facing a new colonization of agriculture? Is it the beginning of a new monopoly? “While Monsanto is leasing those lands, and although many of these lands are private, I believe they may be violating the Constitution because its intention was to prevent a single corporation from having control of more than 500 acres to dominate agriculture,” says professor Carlos Ramos, specialist in the field and professor at the at Interamerican University Law School. “If this law no longer makes sense, let’s open the debate. The intent of the law is as valid today as in the 1900’s. The Justice Secretary is required to enforce the Constitution and must act.”

The events of the agricultural history are repeating themselves. As was the case with some sugar corporations over the past century, one of these companies, Monsanto, changes names to access more land than allowed by law, said a source at the Center for Investigative Journalism. So this media outlet went to the corporation registry at State Department to confirm this. Carlos Morales Figueroa, who was the vice president of the company at that time, incorporated Monsanto Caribe LLC in 2004 . Two years later, he incorporated Monsanto AG Products LLC.
What is this scheme about? “It was done to be able to lease more land … They are both Monsanto. The two entities belong to the parent company,” admitted Carlos Morales’s successor, Juan Santiago. “I’d have to check the data, but Monsanto AG has not yet been a lease contract.” However, a source told this media outlet that the other corporation also rents land in Juana Díaz.

Puerto Rico’s Constitution also prohibits any member of an agricultural corporation to have an interest in a corporation of that nature. “That scheme, to create another company under another name makes the situation more dramatic. Now we have to see if the government takes a blind eye to the situation because they believe these people are creating jobs,” said Carlos Ramos.
The government itself is putting the best land on a silver platter for the seed producers. A source at the Center for Investigative Journalism said that the Land Authority offers is offering them some 2,518 cuerdas (2,445 acres), about 8% of all publicly owned land in the south of the island. All of them occupy a combined 6,000 acres of public and private land all around the island, according to Juan Carlos Justiniano, who represents the seed producers as chairman of the Association of Agricultural Biotechnology Industry of Puerto Rico.

Experiment “on demand”
Paradoxically, while much of the rest of agriculture is dying, last year Puerto Rico was the fifth most important transgenic research center in the U.S., after Iowa, Illinois, Hawaii and Nebraska, the U.S. Department of Agriculture told the Center for Investigative Journalism.

The business focuses on developing seeds custom-ordered mostly by U.S. farmers. The seed producers genetically modify corn, sorghum, cotton and soybeans, and add genes from other organisms, to make them resistant to pests, extreme weather changes or to have more nutritional value and resist herbicides.

Despite the profits they get on the island, and from the multi-million business they have around the world, the Puerto Rico government gives them the same tax breaks that a bonafide local farmers get. In addition, they are reimbursed $2.72 for each hour in wages paid to field workers. That said, the Government of Puerto Rico paid Monsanto, in the April, May and June quarter alone, a total of $121,040, according to a source close to the Department of Agriculture. The subsidy from public funds this year granted to that company could reach nearly half a million dollars.

“I am not opposed in principle to experiments done with transgenics,” said an agronomist close to the seed business. “What bothers me is that they are subsidized to produce a product that is not for here, that does not contribute to the local agricultural economy and does not support better wages for farmers who are experiencing a difficult situation, such as coffee farmers.”

That’s the way things are while Monsanto reinforces its presence in Puerto Rico. Economic Development and Commerce Secretary, José Pérez Riera revealed the news during the most important biotechnology development convention in the world, Bio 2011, last June in Washington DC. There he said Monsanto is investing $4.3 million to establish a 20,000 square foot laboratory in Juana Díaz, in order to develop more genetically modified corn and cotton seeds, which will create 45 new jobs.
“Monsanto’s project is precisely the type of investment that the Government of Puerto Rico has fostered. This Monsanto investment serves to consolidate our position as an optimal destination for the bioscience industry, while advancing our mission to promote an innovation economy,” said Pérez-Riera, in a press release. This announcement is in addition to a $6 million investment by Pioneer Hi-Bred to establish an agricultural biotechnology research laboratory in Salinas. And last May, AgReliant Genetics LLC in Santa Isabel opened a development center for hybrid corn at a cost of $800,000.

What are the novel incentives that the government gives? Was it the government who invested the $4.3 million for Monsanto’s lab? Why subsidize the salaries of the employees of these multimillion-dollar companies? How about the allegedly illegal schemes Monsanto has been carrying out to access more land? The Center for Investigative Journalism has been trying to get an interview with Pérez-Riera since Oct. 21 to raise these issues, with no answer. On Thursday Nov. 3, the CPI (as the Center is known for its initials in Spanish) intercepted Pérez-Riera at the State Election Commission, and he said he would grant the interview. The request was forwarded by email to Susana González, the government representative’s public relations staffer, who was with him when the CPI approached chim, but she has not responded either. Agriculture Secretary Javier Rivera Aquino, has also refused to grant an interview.

Tailor-made legislation?
Transgenic seed companies operate freely and the government protects them. The whole structure to continue making Puerto Rico a transgenic paradise is based on Law 62 of 2009, better known as the Business Promotion and Development of Agricultural Biotechnology Law, driven by Luis Fortuño. It establishes “cutting edge” public policy for Puerto Rico to become a mecca for these companies, giving them fast-track permits, facilitating the acquisition of buildings and providing financial incentives through the Puerto Rico Industrial Development Company and the Department of Agriculture.

During the public hearings to create the law, only companies and government agencies with interests in the industry testified, according to information from the legislative process in the House of Representatives. The law orders the Puerto Rico Industrial Development Company and the Department of Agriculture to advise these corporations regarding permitting and assist them in establishing or expanding in a maximum period of one year. Otherwise, they must compensate them for the costs invested. The Secretary of Agriculture can change the law “to ease the regulations and administrative provisions necessary to make the efficient operation of these enterprises possible, safeguarding the best interests of local agriculture and the people of Puerto Rico, in general.”

That means that the law is written to suit the seed companies that are illegally accessing much of the island’s best farmlands. “If on one hand you allow them to perform mass production and on the other you allow the law to be amended to meet their needs — claimed Law Professor and Director of the Interamerican University’s Environmental Law Program, Jessica Rodríguez Martin — you are putting in their hands the power to manipulate our legal system to their liking.”