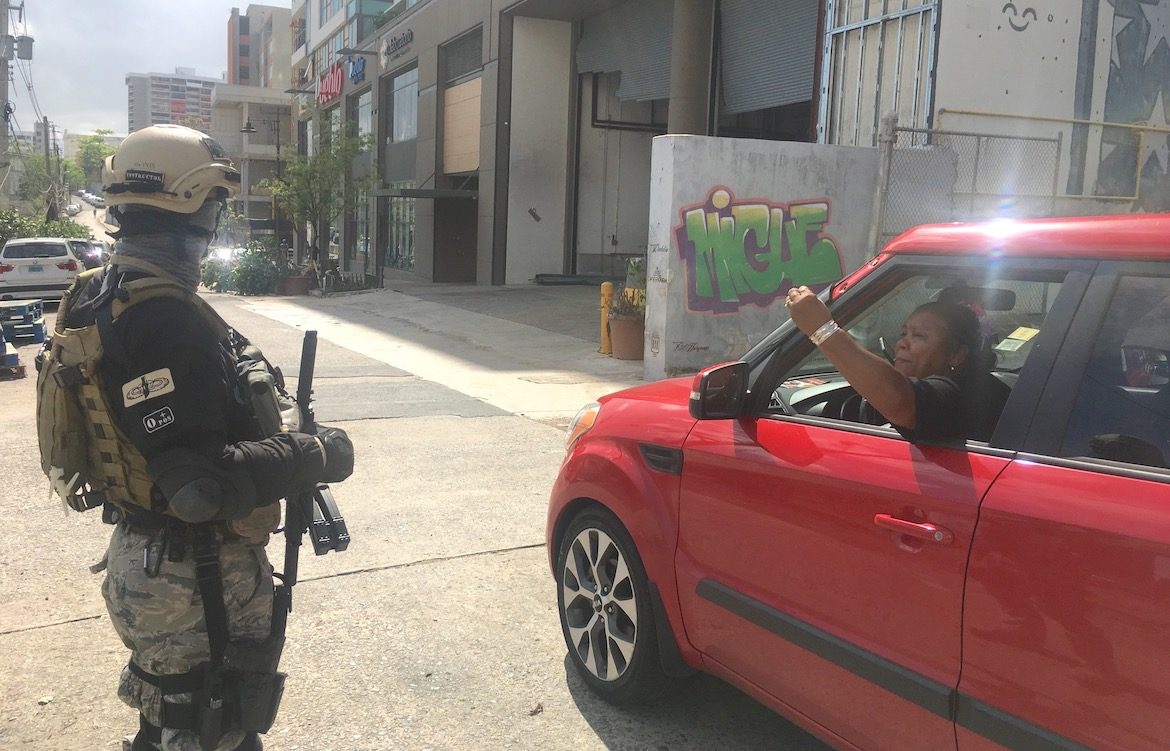 It’s the morning of Oct. 7 and a man stops traffic on Antonsanti Street in Santurce, behind the Ciudadela building. He is wearing a helmet, sunglasses, face mask, a vest with ammunition, gloves, plastic straps used for arrests, boots, camouflaged pants with knee pads, a knife and gun. There is a machine gun in his hand. He has no plaque or ID.

He works for a private security firm hired by Nicholas Prouty, the owner of the Ciudadela complex. Prouty turned to that service after Hurricane María, he told the Center for Investigative Journalism (CPI in Spanish) last week.

“With a substantial reduction in the number of police officers on the streets (due to the government’s reallocation of resources to protect diesel and supply chains), and most streets lights not functioning, Ciudadela has taken the necessary steps to make its residents and commercial tenants feel safe,” he said, without revealing the name of the security firm.

Who do you work for?, the CPI asked the armed man who was at Ciudadela.

“We work with the government,” he answered.

And why the covered face?

“Because if I go with my daughter to eat at Burger King tomorrow and somebody identifies me, they could kill me,” he said.

Two other men dressed in military uniforms standing at another corner of Ciudadela said they worked for a private company, but also refused to reveal the name.

Why do you cover your face?

“Because we want to,” one of them said, pulling the facemask up to his nose to cover himself better. He had a rifle in his hand: a silver shotgun. 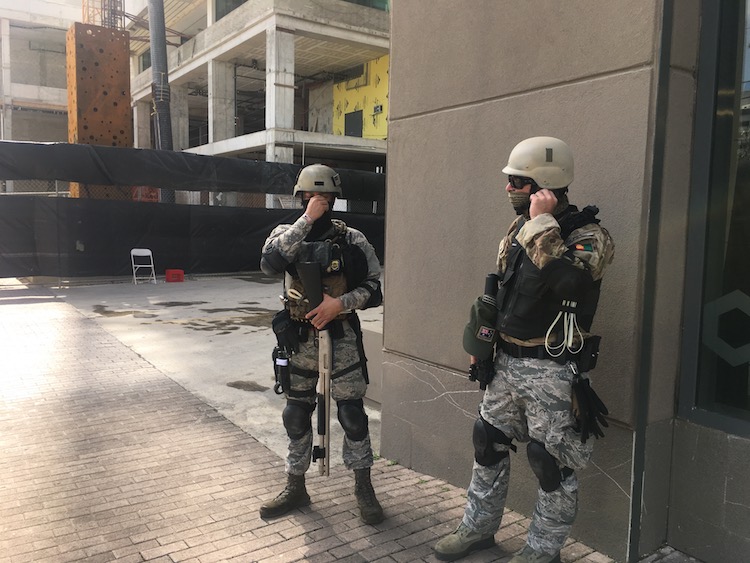 The CPI asked Héctor Pesquera, secretary of the Puerto Rico Department of Public Safety, if a special permit was issued to private security companies to carry rifles after Hurricane María made landfall. “We’re dealing with that,” he said as he left a press conference at the Convention Center. When we showed him the photo of the security men in Ciudadela, he said, “they could be military,” and scurried to the back of a room in the San Juan Convention Center where the government of Puerto Rico has set up its Emergency Operations Center (COE in Spanish) after Hurricane María.

“We go by federal law violations and they include long weapons, carrying an automatic rifle and so on, if they do not have the proper license.”

But are there licenses to carry long weapons?

“It depends [on] whether they are military. That is, it is very restricted. I’m surprised that this is happening. I don’t know if they are off-duty police officers, I don’t know, I would have to see the circumstances. A police officer can work in a private security company in their spare time.”

In that case, could they have long weapons?

“I don’t know, it has roused my interest, so I’ll check it out. But I’m surprised that they only have access to long weapons,” Rodríguez replied.

Meanwhile, Attorney General Olga Castellón said Pesquera is processing an executive order that will detail the rules for private security companies. Perhaps that’s what the Secretary of Public Security referred to when he said, “We’re dealing with that.”

Both federal officials agreed that the order should not allow private security guards to carry long weapons. “They would be going very far,” said Rodríguez.

The Puerto Rico Weapons Act says that “you can not…own, use, transfer or import a Semi-Automatic Assault Weapon.” This prohibition does not apply to “people whose license contains the category of target shooting, hunting or who possess an armory license, or for those assault weapons legally existing in the United States.” Or to people “with a gunsmith license, or law enforcement agents who use arms in the call of duty, or the government of Puerto Rico or the United States, or for the use of by armed forces of the Government of the United States or Puerto Rico.” The law bans arms such as shotguns and semiautomatic rifles.

Two members of the United States Air Force consulted by the CPI said that both the shotgun and the machine gun carried by the men of Ciudadela are automatic or semi-automatic weapons, after seeing a photo. 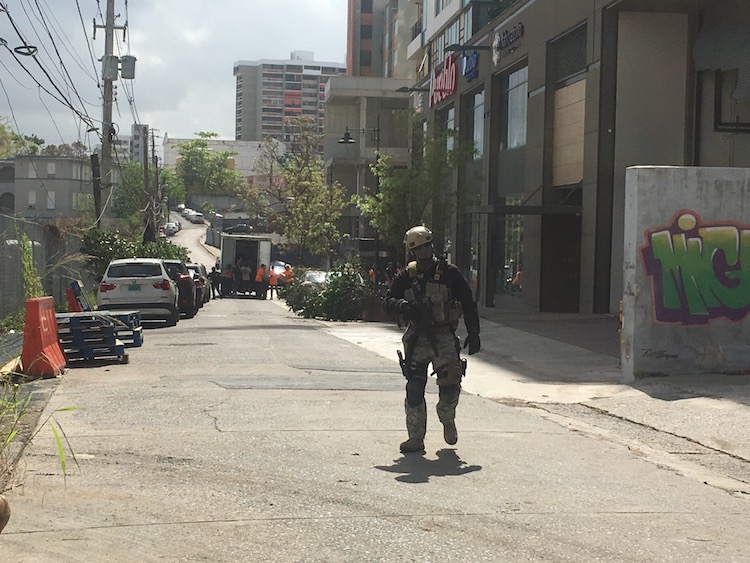 “In terms of firearms, (private security companies) have to be governed by the Puerto Rico Weapons Act and must have a gun holding license. As far as I know, gun licenses granted here are for short guns. Long weapons are used solely and exclusively for the custody of securities transport, armored trucks, and is a special license provided by the government of Puerto Rico. All other armed services have to be with small arms. The only people who could use long weapons are those of the State. I don’t know of any legal authorization to carry long guns in private service in Puerto Rico,” said Adalberto Mercado, vice president of operations for private security company Ranger America.

“The State can provide provisional licenses, but they have to request them and the State has to grant them. If not, they would be carrying illegal weapons inside the territory of Puerto Rico,” Mercado said.

Security firm Academi, known by its former name, Blackwater for getting a $21 million contract with the U.S. government to provide security services during the Iraq war in 2003, said that they already have offers from the local and federal government and by the Red Cross to come to Puerto Rico.

“We’re ready to go,” said Paul Donahue, Chief Operating Officer of Constellis, Academi’s parent company, in a phone interview with the CPI. He explained that if the government of Puerto Rico accepts the proposal made by Academi to respond to the government’s offer, they would be providing security services for water transportation. The company already operates in the Caribbean islands of Dominica and St. Martin, where they arrived after Hurricanes Irma and Maria made landfall. This company, described as an army of mercenaries by investigative journalist Jeremy Scahill, has changed its name three times since its founding in 1997 by a former Navy Seal Officer (United States Marine, Air and Land Teams.)

Blackwater also operated in New Orleans after the passing of Hurricane Katrina in 2005. There they worked under a federal contract and for millionaires who left the city before the storm passed. They were hired to protect their properties.

Mercado said Ranger America has been recruiting more employees since the hurricane, to serve retailers, supermarkets, government warehouses, and “more recently,” FEMA. He did not mentioned the names of the companies or agencies that have hired them.

The Whitestone Group, another U.S. security company, posted an ad on the Monster job search site on Sept. 29 seeking “retired officers with gun licenses for immediate response in Puerto Rico.” The ad said salary would be about $2,400 a week plus a per-diem and housing. The ad that indicates the offer says “FEMA-Puerto Rico.”

“I really don’t know the answer,” said Alejandro De La Campa, director of FEMA in Puerto Rico, when the CPI asked if the agency had hired private security companies to work in Puerto Rico and, specifically, The Whitestone Group.

“But we’re going to hire… all the hiring is done through Federal Protective Services, that’s the federal agency that does the hiring; they would be the ones who could answer you. That we’re going to need (private) security across the island, that’s true,” De La Campa said during a quick exit from the COE.

Whitestone Group currently has “several contracts” with the U.S. Departments of Defense, Engineering, Interior and Commerce, as well as with the Army, Armed Forces and Coast Guard. Its first contract with the federal government was with the U.S. Army Corps of Engineers, the Treasury Department and the Department of Veterans Affairs in New Orleans after Hurricane Katrina in 2005.

People watching the military show behind Ciudadela on that Saturday morning did not seem safer. An elderly woman who was prevented by the man armed with a machine gun from going on Antonsanti Street looked anxious, nervous and frightened. But she still rebuked him through her car window. She asked him to let her pass because she was going to a street that was before where a truck was unloading merchandise. The woman was about to cry. The robot-looking man finally let her in and said, “Thanks for interrupting my work.”

Laura Moscoso contributed to this story.

One thought on “Masked and armed with rifles: Military security firms roam streets of San Juan”