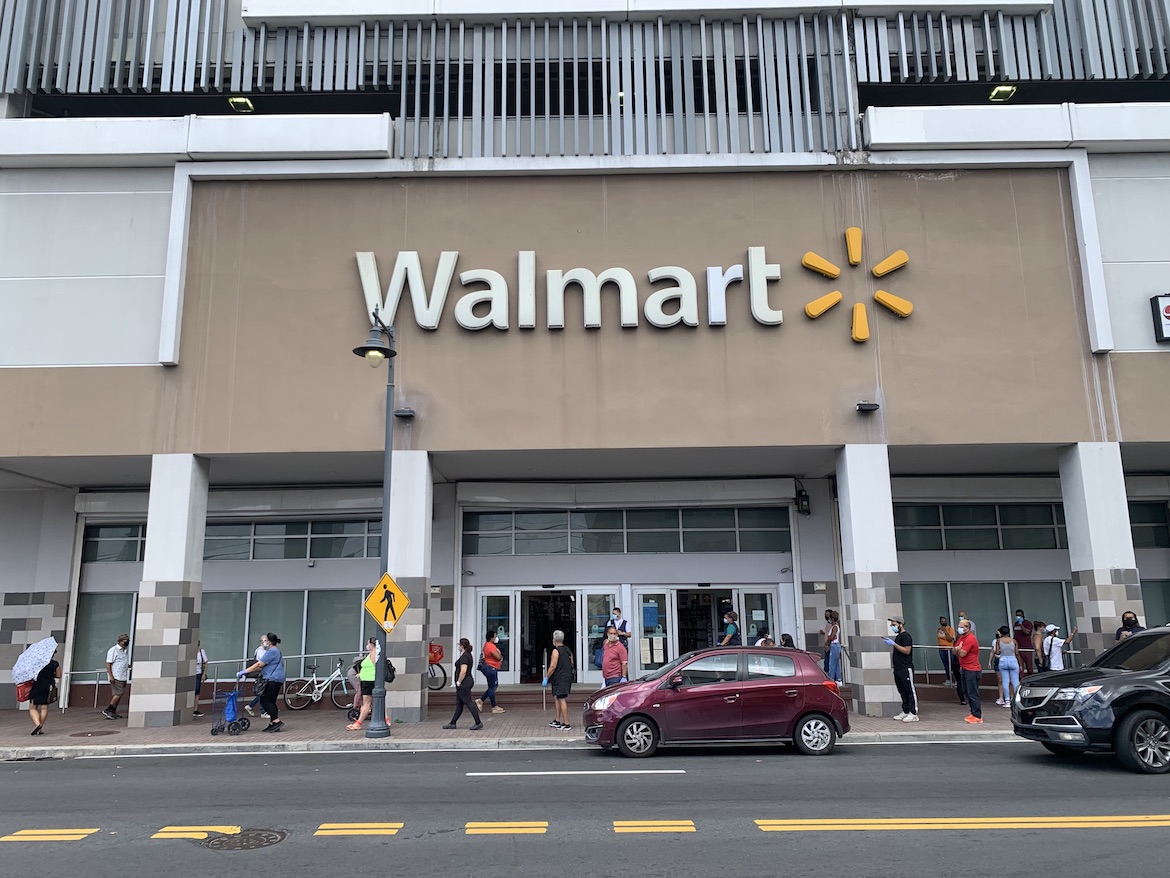 The Puerto Rico Occupational Safety and Health Administration (PROSHA) received 680 complaints against employers related to the COVID-19 crisis from March 14 to April 29. Of those complaints, at least 124 were reported in April between the 1st and the 29, just before the government began the partial reopening after the curfew, and in the same week that the number of cases of infection by COVID-19 was expected to peak.

The Department of Labor and Human Resources (DTRH, in Spanish) sent a chart where the total number of complaints differed from the figures it provided in writing to answer specific questions from the Center for Investigative Journalism (CPI, in Spanish).

The DTRH’s data shows that of the pandemic-related complaints filed against employers who kept their operations going during the quarantine, at least 50 come from hospital employees and eight from health service centers throughout the island. Among these: the HIMA Hospital in Bayamón; Auxilio Mutuo in San Juan; Menonita in Humacao; San Pablo in Caguas; Perea in Mayagüez; La Concepción in San Germán; and, Pavía in Toa Baja.

There are also eight complaints against Walmart in Santurce, Bayamón, Cayey, Carolina, Ponce and Fajardo. Walmart Supercenter in Canóvanas is facing two complaints, one filed in April and another in March. Iván Báez, Walmart’s director of public and government relations, is a member of the Economic Task Force that advises the government and promotes an economic reopening.

Employees of Banco Popular in Canóvanas, Santurce and two other branches in San Juan, also filed complaints with PROSHA. Ignacio Álvarez, President and CEO of Popular Inc. is another member of the Economic Task Force.

PROSHA is part of the Department of Labor and Human Resources. When the CPI asked, Labor Secretary Briseida Torres said “the number of complaints PROSHA received is part of the information included in DTRH reports” provided to the Economic Task Force and the government’s Medical Task Force.

She added that, “the DTRH secretary participated in some of the Economic Task Force meetings in which the partial reopening of the economy was discussed.”

“Our role isn’t to investigate complaints. Our role is to make recommendations for an economic reopening. So, I do not know, I’m not aware of the issue of complaints, the truth is that we don’t have information about complaints. We made some recommendations as to how companies should manage their COVID risk at work. In addition to that, it was agreed that companies that have been open since day zero have to submit their plan and certify it, like those that are going to start working now in this second phase,” he told the CPI.

Although he first said he had no knowledge of the complaints, Colón Zavala later said that “we suggested at one point that there be an expedited process to resolve these complaints as part of the situation we’re in.”

Could that number of complaints against employers due to COVID-19 be seen as an indicator that employers are not ready to protect their employees and clients in the midst of the pandemic? the CPI asked the Labor Secretary via email.

“Not necessarily. The number of complaints reflects the position of employees on certain aspects of their workplaces and they have been handled accordingly. Complaints per se do not constitute violations of prevention guidelines or evidence of noncompliance. The employers that have received recommendations or claims have acted immediately to address them and update their control plans.”

What was the recommendation and opinion of the Labor Secretary regarding the partial reopening of the government?

“The DTRH Secretary’s recommendation regarding the Government’s partial reopening has been, and is, that any opening process must require compliance with the COVID-19 prevention guidelines set by PROSHA and the CDC,” Torres replied.

“After the complaint everything went back to normal”

“Since the COVID-19 situation started, and upon seeing the few preventive measures the store used with its employees, I began trying to convey the concerns to different people. I filed several complaints with PROSHA. I must emphasize that the last complaint was answered, and it was worked out with the store. But, as it always happens, after the complaint everything went back to normal. They have taken preventive measures, but many times, they haven’t monitored customer access controls,” a Walmart employee from Plaza del Sol mall in Bayamón told CPI.

“All of us employees have major anxiety and concerns. There’s no control to public access, they [customers] are coming in as if it were a normal sales day. The store is practically selling unessential things. For an employee to wear a mask, they have to sign a waiver of responsibility that if they don’t sign, they’re not allowed to work and are sent home. The company does not supply us with masks. That’s why several associates have chosen to bring their masks, but as I said, if they don’t fill out the waiver, they will be sent home,” the employee said on the condition of anonymity.

An employee of the Walmart store in Barceloneta — although this store does not appear on the list of workplaces with complaints before PROSHA — told the CPI on April 2 that an employee tested positive for COVID-19 and that there were three employees showing symptoms.

“These employees were removed from their work areas, as well as employees who have been in contact with them. The problem is that there are other   employees showing symptoms, but they don’t want to say it because ‘they haven’t had a fever.’ Employees have taken the initiative to go to Human Resources, but they’ve been told to stop filing complaints about ‘nonsense’ and ‘stupidities,’ since they will no longer grant them sick leave or vacation time to be absent. Many employees are fearful for two reasons, afraid of contracting COVID-19 and afraid of losing their jobs for reporting the situation to Human Resources. They also told them that they aren’t going to close the Barceloneta store even if they have employees with positive COVID-19 test results,” said the employee who asked that their identity be protected.

Báez, from Walmart, said that according to the company’s Human Resources division, “the complaints have been appropriately addressed.” He acknowledged that at least eight employees from different stores have tested positive for COVID-19 and have been sent to self-isolation.

Among the companies reported to PROSHA is the Eaton-Cutler Hammer factory in Arecibo, with a complaint filed on March 25. “The alleged risks are related to employees working without personal protection exposing themselves to contagion and infecting their families with COVID-19. They have not been informed about policies or measures to protect themselves,” says a notice that PROSHA sent Eaton, and that the CPI reviewed.

In these cases, PROSHA orders the employer to self-investigate the claim.

“You must report back to us the results of your investigation in writing no later than March 27, 2020. You must provide documentation to support your findings, including any applicable measures or monitoring results and photographs that you believe may be helpful, as well as a description of any corrective action you have taken or that is underway… If we don’t receive a response on or before March 27, PROSHA will conduct an inspection at your workplace,” PROSHA’s notification to Eaton says.

On Wednesday, May 6, a plant employee who spoke to the CPI on condition of anonymity, said he was going to file another complaint with PROSHA against the company because he still does not feel safe in the work area. After the March 25 complaint, the company began taking the temperature of its employees and made modifications in the cafeteria. But machine operators have no way to keep the distance of at least six feet from each other that the CDC recommends to prevent COVID-19 infection.

As of last week, not every employee had face masks to cover their mouths and noses because the company was not providing enough but was still forcing them to report to work. On Monday they distributed some cloth masks, which according to the employee do not adequately protect because they don’t keep air out.

Employees at other manufacturing plants in Arecibo who have confirmed to the CPI of having similar conditions in their work areas since the onset of the pandemic, work at ABB — makers of power generation products — and Thermo King, producers of transport temperature control systems. These plants also have complaints filed in PROSHA.

Manufacturers Abbott in Arecibo and Caguas, Medtronic in Juncos, Pfizer in Barceloneta, Johnson and Johnson in Añasco, Zimmer Biomet Manufacturing in Ponce and SNC Technical Services in Camuy also appear in the list of employers who have been reported to PROSHA in the context of the COVID-19 pandemic.

PROSHA also received 129 information inquiries and carried out 279 interventions, although it has not reported the results, between March 14 and April 29. The Inspection Bureau has 28 people addressing the complaints filed with PROSHA, according to the DTRH.