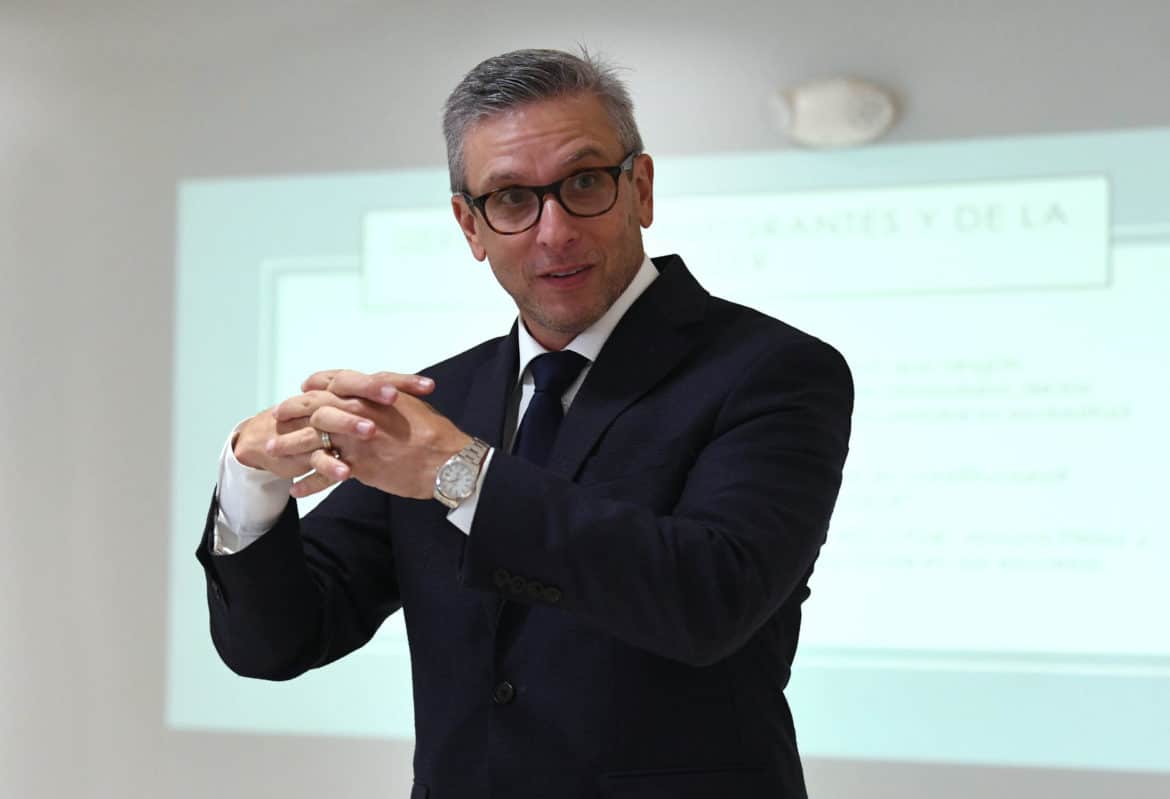 “He contacted me…I won’t deny that he was the one who knocked on the door,” Puerto Rico House of Representatives Speaker Rafael Hernández confirmed to the Center for Investigative Journalism (CPI, in Spanish).

Last November, when the former governor began arranging these meetings, he assured Hernández that he was not a LUMA contractor, although he was acting as its lobbyist. “After the elections there was a lot of contact with lawmakers,” Hernández said on this issue.

Former Gov. Ricardo Rosselló’s star lobbyist in Washington and his friend, Manuel “Manny” Ortiz, also offered his services to the consortium during the transition period to manage the network, several sources confirmed to the CPI.

Rep. Luis Raúl Torres, who is heading investigations into LUMA in the legislature, confirmed to this media outlet that the Economic Development, Planning, Telecommunications, Public-Private Partnerships and Energy Commission will investigate the angle of Ortiz’s relationship with politicians from both parties and the company, after getting a request for an investigation from a high-level official whose name was withheld.

“After LUMA was selected, LUMA lobbyists, those who do have a contract, asked me if LUMA should approach PPD leaders, and I said, ‘I think they should approach them’… I don’t have, nor have had and won’t have a contract with them [LUMA] because I have criticized them too much. Back then, they asked me to make the approach to see if they would see them. And that was it. Nothing that they couldn’t do on their own and nothing for which I was paid for,” García Padilla assured the CPI.

“Why did they call me? Because they know me, because they believed that I could help them be received… And it seems to me that if that company was privatizing the electricity service it should meet with all sectors.” During the electoral race, García Padilla also coordinated a meeting between LUMA and the   former PPD gubernatorial candidate Carlos Delgado, who confirmed it to the CPI.

Was Manuel Ortiz among the LUMA lobbyists who approached you? The CPI asked García Padilla.

Although the former governor spoke of more than one LUMA lobbyist, the company told the House Speaker in a letter dated Oct. 15 that it does not have hired lobbyists as defined by the most recent administrative order that seeks to regulate the practice of influences in that legislative body.

Hernández said he met with Stensby without the presence of the former governor, after his call, since he sees “everyone” and so that no one interprets that the only way to reach him as the head of the House is by paying a fee.

He said his position is clearly against LUMA and that he told Stensby that he expected the company to be held accountable for its operations. Hernández also said he believes there was no illegality in the former governor’s approach because it took place before  the approval of new House rules of Jan. 12, 2021, ordering the registration of lobbyists.

In the summer of 2020, under the New Progressive Party (PNP, in Spanish) administration, LUMA landed the contract to modernize the power transmission and distribution system. Since then, it has shielded itself with high-level former PNP and PPD officials with influence in power circles, as if using revolving doors.

These are the instances in which officials swing between the government and the private sector, “where they exploit the influence, contacts and knowledge acquired in the public sector,” as explained by House Bill 508, which seeks to regulate this practice.

Manny Ortiz, who as a contractor for the Rosselló administration had lobbied Congress for the restoration of the electrical system that Hurricane María destroyed, is now a lobbyist for TRC Solutions, according to the federal lobbyist registry. TRC Solutions has a contract of more than $9 million with LUMA, to advise on compliance with FEMA’s disaster mitigation programs. Ortiz offers TRC Solutions monitoring of “developments related to energy policy, issues related to environmental policy and infrastructure policy.”

Ortiz told the CPI that he has not lobbied for LUMA. “Your sources have shared incorrect information with intentions that are currently unknown to us,” he said in written statements. “My company’s relationship with TRC has nothing to do with its business in Puerto Rico or with any commercial relationship that the company has with LUMA,” he added.

Tensions running high among PPD members over the LUMA contract

The disclosure about the efforts by García Padilla and other former PDP officials in favor of LUMA happen as tensions are running high, after the House’s Economic Development, Planning, Telecommunications, Public-Private Partnerships and Energy Commission, chaired by PPD Rep Luis Raúl Torres, sued the company for not providing information on its executive salaries as well as its communications with government officials, among other matters.

“What I want is for [lobbyists] to come forward and explain if they’re benefiting. Especially the PPD ones. Those are the first I want to unmask . That the record shows who they are, if they’re getting paid, and why,” he told the CPI.

García Padilla is not alone in his actions as a PPD official. The attorney who has represented the company in the House’s request for information is Margarita Mercado Echegaray, who works as a professor at the University of Puerto Rico Law School. The former governor appointed her Solicitor General of Puerto Rico in 2013, a position she held until 2017.

Mercado serves LUMA as an employee of DLA Piper, a law firm well connected to the government — it has maintained contracts with key agencies in charge of Puerto Rico’s economic development and energy system, such as the Treasury Department, the Fiscal Agency and Financial Advisory Authority and the Public-Private Partnerships Authority (which also oversees the contract with LUMA).

Among LUMA’s recruits is also Attorney José Pérez Vélez, who works as an external affairs advisor to the company. Former Gov. García Padilla appointed him in 2015 executive director of the Independent Office for Consumer Protection, which defends the interests of customers in energy services, telecommunications, and transportation. He was in that position until August 2018, from which he took actions against the illegal contracts signed by solar panels company Sunnova. Early in the administration’s four-year term, José Pérez arranged meetings with PPD and PNP senators, as well as with PPD representatives, Luis Raúl Torres said.

One of the go-to arguments to push the Puerto Rico Electric Power Authority (PREPA)’s privatization has been the urgency to end the influence of the political parties in its administration. But LUMA now shows that politicization has permeated into the private company.

“There are people in the Popular Democratic Party that are well connected to the company ,” said the Speaker of the House. During the García Padilla administration, Hernández and the former governor had public disagreements over the legislation for Puerto Rico’s Debt Moratorium Act.

On the PNP’s side is Michelle Hernández de Fraley, former Police Superintendent during ex-Gov. Ricardo Rosselló’s administration, and who was hired as LUMA’s chief of security. The company’s crisis management manager is Abner Gómez, former director of the Bureau for Emergency and Disaster Management, also under Rosselló’s tenure.

The shared government, composed of a PNP executive branch and a PPD legislature, creates the need for a lobbying strategy for both teams.

“This is the classic example of revolving door abuses. LUMA is playing every avenue it can to congratiate itself with the Puerto Rico government”, said Craig Holman, representative of Public Citizen, an organization that promotes transparency and ethics in lobbying in US Congress, as well as for finance reform in political campaigns.

“The most effective tool for a corporation to get a contract or enduring itself is the revolving door. It gives the company a direct line of communications with the government.  When former governor or a well connected official picks up the phone, their call is answered. That does not happen to the rest of us,”

William Vázquez Irizarry, law professor at the UPR and who under former PPD Gov. Sila María Calderón’s administration was an advisor to Fortaleza and Justice Secretary, has also collaborated with LUMA. The attorney presented arguments in favor of the company before the Puerto Rico Supreme Court, as part of the lawsuit filed by the House of Representatives to get the company to turn over information.

“It isn’t an ongoing relationship. It was for constitutional litigation… Revolving doors is a matter of immediacy. I held government positions 15 years ago. They hired me for my expertise.”

The House of Representatives Speaker argues that it cannot be said that the PPD is split because of LUMA. The depth and breadth of that party’s relationship with the company, he said, will be seen when the House can finish analyzing and publishing the documents that LUMA has provided as part of the lawsuit.