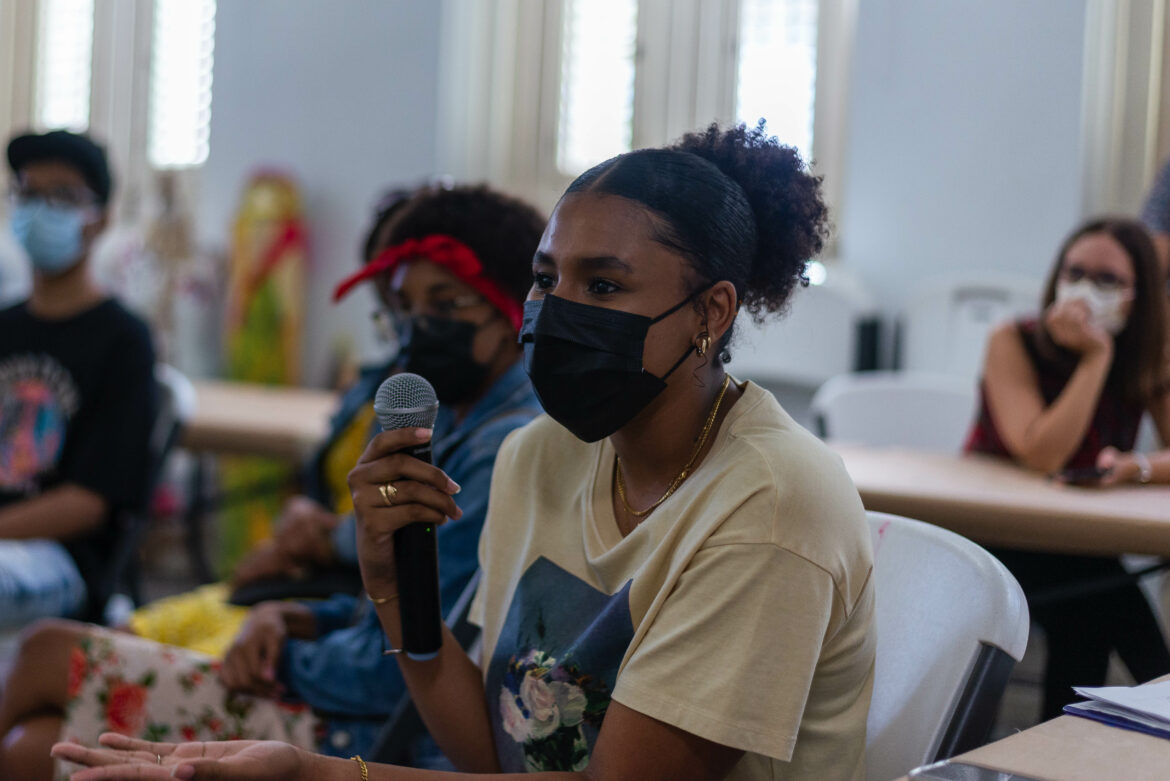 Aidelys Martínez De Jesús is one of the young women who participated in the workshops offered at the Gregorio Lanzó Cirino Community Center in Parcelas Suárez, Loíza. She is interested in reading competitions and wants to see her hometown teams active again.

A podcast, a show on Facebook Live and a Facebook page, as well as a photo exhibition, were the projects developed by a group of youngsters from Loíza presented during the closing of Medioscopio, a media literacy and citizen reporters initiative conducted in partnership between the Center for Investigative Journalism (CPI, in Spanish), the Puerto Rico Museum of Contemporary Art and its “MAC en el Barrio” program, and ASPIRA Puerto Rico.

In its first phase, the Medioscopio community project worked with young people between the ages of 13 and 18, who for 13 consecutive Saturdays participated in workshops on topics such as what is disinformation and how to identify it, freedom of speech and the right of access to information, community communication strategies and how to identify sources of information.

“Medioscopio seeks for young people to become active and alert citizens in their communities and the island. By developing certain routines and tools with them to understand and question the media landscape, and how they represent Loiceños, we get them to generate interest in being critical consumers and think about how they can transform those media or create their own. At this stage of the project, we were interested in working with young people because at that age there is a natural impulse to question, to ask questions, and it’s a fertile stage for developing critical skills that will serve them in everything they do in the future,” said CPI Executive Director, Carla Minet.

Among the projects that the Loíza students developed that were presented this Saturday is a Facebook Live of the youngsters team identified as Atukiti: Aula Loiceña, they discussed how they see machismo in their communities and what they can do as young people to remedy it, together with Tania Rosario, executive director of Taller Salud, a feminist and community organization established in Loíza, a community with a strong Black heritage tradition and high poverty rates in the northeast coast of Puerto Rico.

The young participants also produced a podcast whose first episode focuses on Loiza’s video game fans or “gamers” community and a Facebook page on how sports equipment and facilities have been dismantled in Loíza, limiting the town’s recreation options.

“At the MAC we’re pleased to once again welcome youngsters with whom we keep a progressive bond of community work. Seeing them put into practice the development of their skills gives us great pride, since it’s a fundamental part of the community immersion methodology inherent to our cultural equity program ‘MAC en el Barrio.’ We’ll continue to strengthen community empowerment through multidisciplinary practices that engage residents, artists, educators, and environmentalists. We thank the Community Board of Parcelas Suárez for allowing us to expand alliances that give visibility to the multiple community voices, especially those of historically marginalized identities, such as those that these young people discuss and analyze today,” said Marianne Ramírez Aponte, executive director, and chief curator of the Puerto Rico Museum of Contemporary Art.

“Medioscopio has given young people the opportunity to explore and learn about new education and employment alternatives. Through visits to several communities, students have learned to value the richness of our coastal environment and to conserve it,” added William Gómez Cedeño, executive director of ASPIRA de Puerto Rico.

The projects of Medioscopio’s closing exhibit at the Puerto Rico Museum of Contemporary Art in Santurce can be accessed through this link.