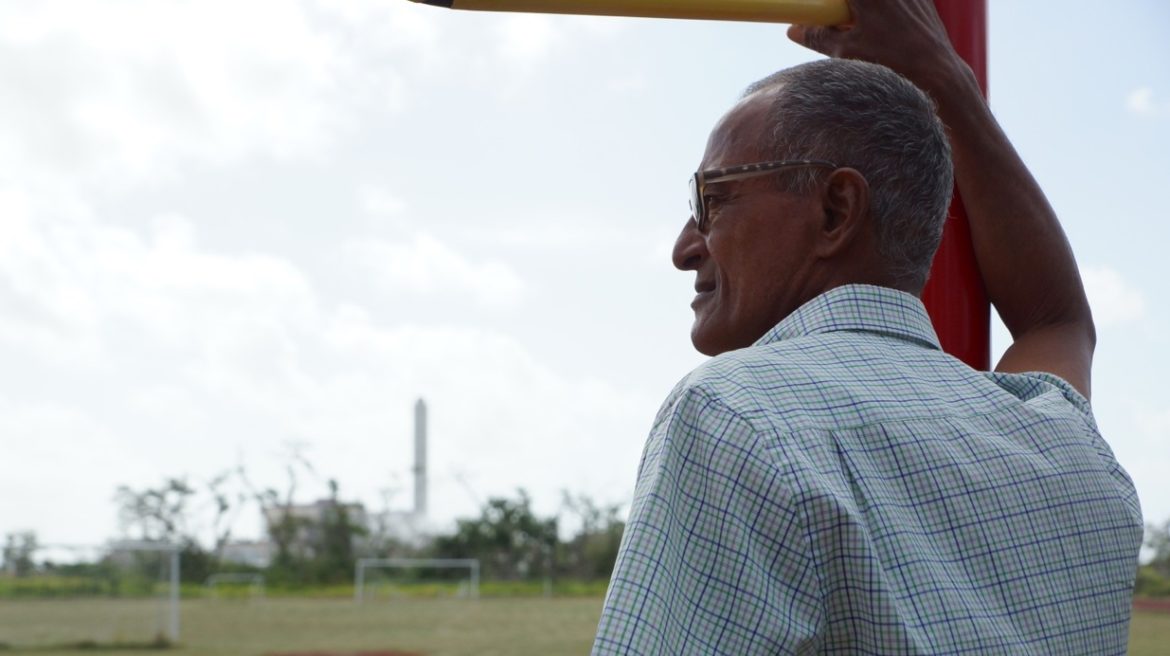 Erasmo Cruz Vega lives in the Santa Ana community, near the AES plant in Guayama.

“Three weeks ago, the neighbor from up there died of lung cancer and another one who lived nearby died of the same cause last year,” he said whispering. “He wasn’t 60 years old.”

Now, surrounded by a poverty different from that of the last century, in an area dominated by multinational industries such as pharmaceutical companies Baxter and Pfizer, and the AES coal fired power plant, the Puerto Rico Electric Power Authority retiree does not stop wondering why so many people in his community of 400 houses suffer what he called “a cancer epidemic.”

“Back here there are three with prostate cancer,” he said. “And over there alone, on a street in the San Martín sector, seven people have died of cancer. But many more have died in Miramar.” The Santa Ana, San Martín and Miramar communities are located less than a mile from the AES plant.

“That’s alarming, and the worst thing is that people aren’t even fazed anymore. When they tell you that so-and-so has cancer, it’s as if they told you they caught a cold,” he lamented.

According to the Puerto Rico Cancer Registry, between 2004 and 2014, Guayama remained among the 10 municipalities with the highest incidence on the island. Neighboring towns such as Santa Isabel, Arroyo and Salinas occupied the third, fourth and fifth places on the list, respectively. 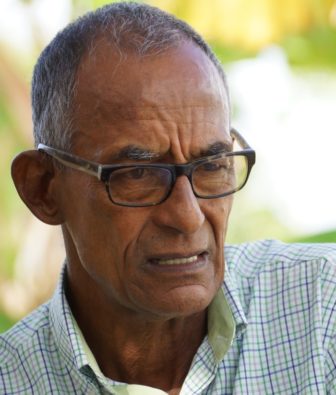 And to these concerns, Erasmo must now add another: water, since signs of radioactivity, in addition to traces of arsenic, chromium, selenium and molybdenum, have been discovered in the groundwater of AES in Guayama, a company that for at least four years has accumulated more than 400,000 tons of coal ash outdoors, with nothing to protect the soil and aquifers from potential contamination.

The study, paid for by AES and conducted between August and November of last year ordered by the U.S. Environmental Protection Agency (EPA), shows that the ash mountain is releasing large quantities of chemicals into the groundwater and that the contamination is already migrating, including moving toward the ocean, four experts consulted by La Perla del Sur and the Center for Investigative Journalism recognized separately.

“The elevated levels of pollutants indicate the waste pile is releasing hazardous chemicals to the groundwater, which are flowing offsite,” said Lisa Evans, a lawyer with more than 25 years of experience in environmental litigation and senior adviser to Earthjustice, an environmental law organization with a long-standing track record in the United States.

“If any resident is drinking groundwater near the plant, this would be a threat to their safety,” she said.

In the communities surrounding AES there are families that use well water “because they believe it is better than that of the Puerto Rico Aqueduct and Sewer Authority,” said Aldwin Colón-Burgos, a neighbor of the Miramar sector in Guayama.

The results of the new study could reveal an even bigger problem, given that since 2004, another 2 million tons of coal ash have been discarded on the ground of 12 island municipalities, without any type of protective material that prevents the ashes toxic elements to spill into land and water, through rain or runoff.

The 2 million tons were used as landfill in residential and commercial projects, as well as roads and water retention ponds in towns such as San Juan, Caguas and Toa Alta. Similarly, in Juncos, Ponce and Mayagüez, Ron Rodrique, vice president of AES Puerto Rico, certified in 2012.

The fate of another million tons produced by the Guayama coal fired power plant is unknown. Not even the Environmental Quality Board (EQB) has proof of the exact location of these discharges, as the president of that agency, Tania Vázquez-Rivera, acknowledged in a letter to the Senate of Puerto Rico. In Puerto Rico, this agency exercises regulatory functions.

Since January 2016, the Center for Investigative Journalism and La Perla del Sur have requested an interview with Manuel Mata-Merino, president of AES Guayama, but he has not granted it. The executive also did not respond this week to another request made by both media outlets. Although he was offered the possibility of an interview by telephone, the company’s representative, Julio Sainz de la Maza, indicated that “Unfortunately, Mr. Manuel Mata is outside of Puerto Rico at the annual AES Corp. meeting.”

Among the substances detected in AES’s subsoil, Evans alarmingly pointed out chromium, an element that in coal ash predominates in the form of hexavalent chromium (CrVI) “which is a very potent carcinogen in small doses.”

Since 2010, the EPA has classified this variant of chromium as a toxic substance that promotes the development of cancer if inhaled or ingested. In addition, studies from the agency’s National Center for Environmental Assessment have established a relationship between CrVI and the formation of lung tumors.

In his analysis, Evans also paid attention to radio 226 and radio 228, two radioactive metals that although did not exceed the maximum limit allowed by the EPA, reflected increases in the six AES monitoring wells between August and November 2017.

If prolonged exposure occurs, high levels of radium can cause from anemia to cataracts, tooth fracture, cancer (especially bone cancer) and death, according to the Agency for Toxic Substances of the Centers for Disease Control and Prevention (CDC.) At present, 13 radio isotopes are known, all radioactive: four are found in low concentrations in nature and the rest are produced synthetically, according to the Technical University of Delft in the Netherlands.

“Some of these effects may take years to appear and are mainly due to gamma radiation,” the agency added on its website. This variant of the radio, however, was not included in the report the firm DNA Environmental conducted for AES.

“But these ashes contain other radioactive isotopes, also soluble, that have to be reaching the groundwater and the report (DNA and AES) is totally inadequate, because it is limited to two of them,” warned the doctor in chemistry Osvaldo Rosario-López, who for more than a decade has researched the health and environmental impacts of the mismanagement of this industrial waste.

“We’ve been saying for years that this was going to happen in the south and now we have evidence of this tragedy,” he added. 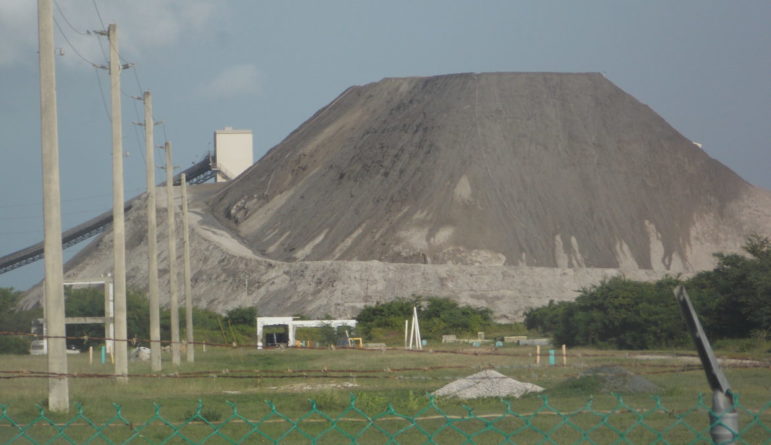 Pile of ashes from AES Guayama, before hurricane Maria.

Meanwhile, the same subsoil study confirmed rising levels of arsenic in the water, an issue that concerned Eric D. Olson, senior director of the Health and Food Division of the Natural Resources Defense Council (NRDC) in the United States.

Between Sept. 12 and Oct. 3 alone, tests reflected a 100 percent increase in arsenic in one of the monitoring wells near the ash mountain, jumping from three to six parts per billion (ppb.)

Rosario-Lopez said the jump coincides with Hurricane María’s heavy rainfall “and that is something that we also warned would happen,” he said.

Between September 19-21, 2017, the National Weather Service registered almost 15 inches of rain over Guayama’s south central area, “and since coal ash is soluble in water, these atmospheric phenomena accelerate the dispersion of its pollutants,” both by water and through wind, Rosario-López explained.

“The good news is that the arsenic levels appear to be somewhat below EPA’s Maximum Contaminant Level of 10 parts per billion (ppb),” Olson said.

Listed among the most toxic elements that may exist, the intake of arsenic can intensify the chances of developing cancer of the skin, lung, liver and lymphatic system, according to the same university. Prolonged exposure could also cause infertility and miscarriages, skin lesions, heart problems and brain damage.

Rosario-López was not the only one to anticipate the presence of arsenic in the groundwater. So did the EPA, as revealed in the series of reports, Coal Ash Time Bomb.

On November 7, 2011 the then administrator of Region 2, Judith Enck, warned of this danger to former EQB President Pedro Nieves-Miranda. In her letter, Enck also referred to an official report detailing 84 cases of aquifers polluted with coal ash.

In spite of that, no federal or Puerto Rican authority took action to prevent what is already a fact in the subsoil of AES in Guayama and the EPA still does not classify the material as toxic or dangerous.

Meanwhile, chemical engineer Nelson Cardona-Martínez, a professor at the University of Puerto Rico in Mayagüez, said that other elements such as selenium and molybdenum exceeded the maximum levels of contaminants allowed in water “by far.”

After evaluating the results, he warned that selenium exceeded the limit allowed by the EPA by 11 times, and molybdenum, by hundreds of times.

Another analysis offered by the senior lawyer from Earthjustice stated that molybdenum exceeded the recommended safety threshold in AES’s monitoring well number 3 by 430%.

“If these individual levels are of concern, the concern should be even greater due to the harm the collective or synergistic effect of all these poisons that are reaching the aquifer is causing,” Rosario-López pointed out.

“Some of those substances could have been in the environment naturally, but never in that combination and at those levels of toxicity,” he continued. “That is precisely one of the characteristics of coal ash pollution, which is very unique to coal.”

Similar findings in the United States

The confirmation of how the AES coal ash mountain has leaked harmful chemicals into the subsoil is not exceptional these days.

In compliance with new EPA regulations, hundreds of power plants in the United States that use coal as raw material have produced results consistent with those of AES in Guayama, since last February. In some cases, with more dramatic results because the ponds and ash deposits being studied have been in operation for decades.

AES has been operating since November 2002 in Puerto Rico. Its contract for the exclusive sale of electricity to the Puerto Rico Electric Power Authority expires in November 2027. If it continues with its operation as it has until now, by that date, AES in Guayama will have generated 2.5 million additional tons of coal ash.

In that sense, chemist Rosario-López urged the government to assume its responsibility and to curb what is already headed to be a major environmental disaster.

“The damage cannot be undone, so the only remedy to alleviate, to minimize what is there, is to remove those ashes from wherever they have been thrown,” he said. “Otherwise, this will continue to escalate. I’m afraid that sooner rather than later, because of the porous nature of the land and the amount of rain that falls in Puerto Rico, we will see pollution in more places, and much more serious.”

In response to requests for information from the EPA, the director of its Caribbean Environmental Protection Division, Carmen Guerrero-Pérez, stated in writing that it is “premature for the agency to comment or provide interpretations of any information contained in the report.”