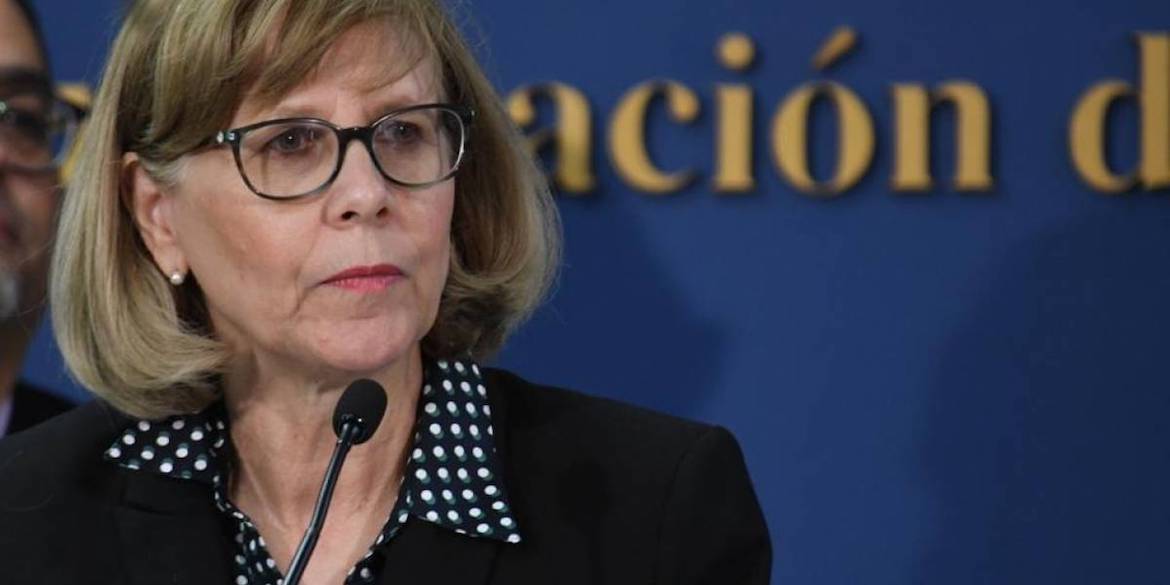 State Epidemiologist Carmen Deseda, responsible to advise and inform citizens on how to fight the coronavirus pandemic in Puerto Rico, has no formal academic training as an epidemiologist, but instead took a course that accredits her as an Epidemiology Officer, the Center for Investigative Journalism (CPI, in Spanish) found.

According to her curriculum vitae, Deseda has a bachelor’s degree in Biology from the University of Puerto Rico and an MD in Medicine from the Universidad Central del Caribe in Puerto Rico. In 1980, she participated in a field epidemiology training at the Epidemiology Intelligence Service Unit at the Atlanta headquarters of the Centers for Disease Control and Prevention (CDC). She has no master’s degree or PhD in epidemiology.

Her field training in epidemiology was offered by the CDC, which is not an academic institution, and is offered to coach doctors who will practice as “State Epidemiologists.”

Deseda was appointed State Epidemiologist in 1994 by ex-Governor Pedro Rosselló-González.

During former Gov. Luis Fortuño-Burset’s tenure, Dr. Deseda worked in the Puerto Rico’s Health Department (HD) and was in charge of epidemiological scrutiny of influenza AH1N1 in early August 2009, when Dr. Iván González-Cancel, nominated as Secretary of Health, removed Dr. Johnny Rullán from his post. Rullán, an epidemiologist, had worked at the CDC and as head of the Health Department’s Epidemiology Division. Rullán had been the Health Secretary twice, first under Gov. Sila Calderón’s administration, between 2001 and 2004, and then in 2008 during Aníbal Acevedo-Vilá’s administration.

Deseda has been the government official present at press conferences answering questions about the coronavirus pandemic after Health Secretary Rafael Rodríguez-Mercado stepped down, the same day the first three cases of coronavirus in Puerto Rico were confirmed last Friday.

During a government press conference last Tuesday, the CPI asked who was the person in charge of medical matters within the coronavirus task force. None of the officials knew how to answer the question in detail and said there was “a team” and that its member’s qualifications were available. The CPI requested Dr. Deseda’s curriculum vitae from the Secretary of Public Affairs Osvaldo Soto, but as of today, it has not been provided.

On Thursday, Gov. Vázquez announced the inclusion of doctors and academics in a group of specialists in epidemiology, infectiology, trauma, surgery, gynecology, and psychiatry at the University of Puerto Rico, to reinforce the task force created to address the coronavirus situation on the island.

Although Deseda was there, she did not speak during the press conference and the Governor backed her up when asked if Deseda will continue in her post after complaints from elected officials and public health experts, including former New Progressive Party Health Secretary Enrique Vázquez-Quintana, for her to resign.

“Dr. Deseda has been doing her work as State Epidemiologist. We have a group of specialists here who are all going to work together. We have the academia, the Medical Sciences campus helping, contributing to the decisions that are being made and the strategies. Puerto Rico has the best of the best making medical decisions. In this sense, the Puerto Rican people can be at ease,” said Vázquez this Thursday at the press conference.

One of Deseda’s biggest mistakes has been insisting that the CDC’s recommendations be strictly followed, which has implied that only those with the three symptoms are being tested: fever, dry cough and difficulty breathing, as well as those who may have been exposed to the virus when traveling.

So far Deseda is the one responsible for deciding who is tested among the hundreds of calls coming into the Health Department. Gov. Vázquez said Thursday that authorization from the Health Department will not be required for people who come in with a doctor’s recommendation. For those who arrive without a doctor’s recommendation, Deseda’s take is that CDC criteria will continue to apply.

Cruz María Nazario, professor at the Department of Biostatistics and Epidemiology of the University of Puerto Rico Medical Sciences Campus’ Graduate School of Public Health, told the CPI that the island does not have that many confirmed cases of coronavirus because the Government is not doing the tests properly.

“They’re following the CDC’s instructions at verbatim and I believe we’re already in a place where we must free ourselves from the CDC and allow us to do the tests that have to be done right now,” said Nazario. The government has the capacity to do from 50 to 100 tests daily.

The information that Deseda has provided over the past few weeks is incorrect, inconsistent and imprecise. The CPI verified some of Deseda’s claims from Wednesday, Feb. 26, until the last conference she went to.

This is what we found:

WHAT SHE SAID: “If you look closely, many of these countries have been in contact, that is, they are close to China. Which countries are those? For example, Italy. In other words, they’re countries close to those areas where there have been infections,” Deseda said on Radio Isla.

FALSE: The first wrong fact here is that China is not close to Italy. The second problem with this statement — which was repeated by several officials, including former Health Secretary Rodríguez-Mercado, minimized the chances that the virus would reach Puerto Rico — this is how pandemics occur. It is transmitted by people who spread it, from person to person, from country to country. Anyone sick with COVID-19 symptoms can spread it.

Nazario emphasized that the Government should have been prepared since January to deal with the pandemic. “The government told us that the airports were monitored by federal agencies and look, [the coronavirus] arrived easily,” added the expert consulted by CPI.

Mar. 11:
WHAT SHE SAID: “When you go to say hello, if you have these respiratory symptoms, [you should] avoid shaking hands and being affectionate with the person. People and secretions must be avoided. Droplets have been the way COVID-19 has been transmitted at sneezing or coughing.”

CONTRADICTORY: Two days later, Deseda wanted to greet Journalist Felipe Gómez with a hug and a kiss, and he asked her to stay back, while she insisted on approaching.

Respiratory droplets produced when a person sneezes or coughs are not the only ways of contagion, according to the CDC. Symptomatic people are the most contagious, but transmission can happen even if people have no symptoms. The contagion can also occur by touching surfaces or objects that have the virus on them.

Mar. 12:
WHAT SHE SAID: “The other thing is that this person, patient zero [the Panamanian doctor who was at the Día Nacional de la Zalsa festival] has already been contacted. He was interviewed several times and he alleged the contact he had was only during four hours. The contact, according to the duration, also establishes risks that are classified as mild to moderate. We discussed this with the CDC and it was established that the people who were in those rows close to the patient, if warranted, should be voluntarily observed for a 14-day period and if they show symptoms, they should contact the Health Department to handle it accordingly, in the event that tests are needed.” “When this person was at the Zalsa Festival, he confirmed he was there for four hours. When he was in the other place (a ballroom), he didn’t say how long he was there for, so the risk decreased. The contact is with the person with whom he was directly with, the person with whom he danced, etc., but the length of time he was there, because he did not feel very well, weren’t hours as in the other place. Those people who identify themselves as having been in contact [with him] and have symptoms, must call the number we have available.”

FALSE: This statement is full of inconsistencies. Epidemiologist Nazario said that in the midst of a pandemic, the government cannot follow CDC guidelines as a straight jacket. “In the face of epidemics, you have to bypass the restrictions, you have to allow more people to be evaluated, regardless of the symptoms.”

“A person who has coughed, or covered their mouth with their hands, and touched a bathroom doorknob; it doesn’t take four hours for the next person who grabbed the knob, went in, touched their face, nose or mouth. [The virus] can last hours and hours on that surface. It’s contact, period. It’s exposure, period,” she insisted. Contact doesn’t have to be prolonged to contract the virus.

The recommendation of the World Health Organization (WHO) is: “Tests, tests, tests.” Nazario said that this is the key to the countries that have been successful in fighting this pandemic. “The key is to test and identify the positives. Those who test positive, even without symptoms, must be hospitalized.” She also emphasized that if the government doesn’t run the tests in the communities, it will have a hard time knowing how it is spreading.

Mar. 13:
WHAT SHE SAID: “It was believed that this person [Dr. Fernando Cabanillas’s patient] had no travel history. However, later, through investigations done 24 hours ago, it was confirmed that there was a person close to this patient, through a contact prior to presenting the symptoms. This person had spent four days in Chicago, in areas that since January have been reporting an increase in cases. It was no longer about someone who was in the hospital and the test was authorized for that reason, but a person who had a contact, who traveled to Chicago, and spent four days there, then developed symptoms, and was exposed to this symptomatic person.”

CONTRADICTORY: The government is inconsistent in saying who will be tested or what the criteria is. Anyone may have had the virus and show no symptoms, experts have explained. Therefore, the criterion of the trip as the only element to do the test is obsolete. On Mar. 18, the state epidemiologist said the case of Dr. Cabanillas’ patient “is not considered local” because they were in contact with a person from Chicago, where there are confirmed cases of coronavirus.

Mar. 18:
WHAT SHE SAID: “The recommendations we had were based on the CDC, so when CDC stated that the initial recommendations were for those who had traveled. Then they said those who had gone to China, Italy, Iran, South Korea, then they included Japan… Now we have almost 30 countries included in the high-risk list,” while emphasizing that the government has now extended the criteria to do tests.

DECEPTIVE: While it is true that the CDC has guidelines for dealing with pandemics, they are not a straight jacket. Nazario said there is no data in Puerto Rico because it’s not being looked into. “If cases are not sought, it’s irresponsible for the government to say that there is no transmission in the community if screening has not been done.”